From Encyclopedia of Buddhism
Jump to: navigation, search
This article is about a about the meaning of Satya in different Indian religions. For the meaning of this term within Buddhism, see Sacca. 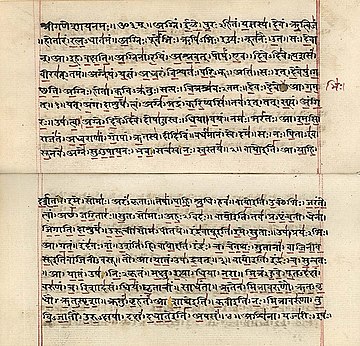 Satya is an important concept and virtue in Indian religions. Rigveda, dated to be from the 2nd millennium BC, offers the earliest discussion of Satya.[1][2] It can be seen, for example, in the fifth and sixth lines, in above Rigveda manuscript image.

Satya (Sanskrit: सत्य) literally means truth, reality.[3][4] It also refers to a virtue in Indian religions, referring to being truthful in one's thought, speech and action.[5] In Yoga, satya is one of five yamas, the virtuous restraint from falsehood and distortion of reality in one's expressions and actions.[6]

It is a Sanskrit word that is also interpreted as "absolute truth".[citation needed]

"Satya" (Sat-yá)[3] is derived from Sat and ya. Sat means being, reality, and is the present participle of the root as "to be" (PIE *h₁es-; cognate to English is).[3] Ya and yam means "advancing, supporting, hold up, sustain, one that moves".[7][8] As a composite word, Satya and Satyam imply that "which supports, sustains and advances reality, being"; it literally means, "that which is true, actual, real, genuine, trustworthy, valid".[3]

In Vedic literature, and later sutras, the meaning of the word Satya evolves into an ethical concept about truthfulness and is considered an important virtue.[5][9] It means being true and consistent with reality in one's thought, speech and action.[5]

Satya is a central theme in the Vedas, states Hindery.[1] It is equated with and considered necessary to the concept Ṛta (Sanskrit ऋतं ṛtaṃ) – that which is properly joined, order, rule, nature, balance, harmony.[1][13] Ṛta results from Satya in the Vedas, states Holdrege,[14] as it regulates and enables the operation of the universe and everything within it. Satya (truth) is considered essential, and without it, the universe and reality falls apart, cannot function.[14]

In Rigveda, opposed to rita and satya are anrita and asatya (falsehood).[1] Truth and truthfulness is considered as a form of reverence for the divine, while falsehood a form of sin. Satya includes action and speech that is factual, real, true and reverent to Ṛta in Book 1, 4, 6, 7, 9 and 10 of Rigveda.[2] However, Satya isn't merely about one's past that is in context in the Vedas, it has one's current and one's future contexts as well. De Nicolás states, that in Rigveda, "Satya is the modality of acting in the world of Sat, as the truth to be built, formed or established".[2]

Satya is a widely discussed concept in various Upanishads, including the Brihadaranyaka Upanishad where satya is called the means to Brahman, as well as Brahman (Being, true self).[15][16] In hymn 1.4.14 of Brhad􏰎aranyaka Upanishad, Satya (truth) is equated to Dharma (morality, ethics, law of righteousness),[17] as

Truth is sought, praised in the hymns of Upanishads, held as one that ultimately, always prevails. The Mundaka Upanishad, for example, states in Book 3, Chapter 1,[19]

Sandilya Upanishad of Atharvanaveda, in Chapter 1, includes ten[20] forbearances as virtues, in its exposition of Yoga. It defines Satya as "the speaking of the truth that conduces to the well being of creatures, through the actions of one's mind, speech or body."[21]

Deussen states that Satya is described in the major Upanishads with two layers of meanings - one as empirical truth about reality, another as abstract truth about universal principle, being and the unchanging. Both these ideas are explained in early Upanishads, composed before 500 BC, by variously breaking the word satya or satyam into two or three syllables. In later Upanishads, the ideas evolve and transcend into satya as truth (or truthfulness), and Brahman as the Being, Be-ness, real Self, the eternal.[22]

The Shanti Parva of the Mahabharata states, "The righteous hold that forgiveness, truth, sincerity and compassion are the foremost (of all virtues). Truth is the essence of the Vedas."[23]

The Epic repeatedly emphasizes that Satya is a basic virtue, because everything and everyone depends on and relies on Satya.[24]

To speak the truth is meritorious. There is nothing higher than truth. Everything is upheld by truth, and everything rests upon truth. Even the sinful and ferocious, swear to keep the truth amongst themselves, dismiss all grounds of quarrel and uniting with one another set themselves to their (sinful) tasks, depending upon truth. If they behaved falsely towards one another, they would then be destroyed without doubt.
— The Mahabharata, Chapter CCLIX, Shanti Parva[24]

In the Yoga Sutras of Patanjali, it is written, “When one is firmly established in speaking truth, the fruits of action become subservient to him."[25] In Yoga sutra, Satya is one of the five yamas, or virtuous restraints, along with ahimsa (restraint from violence or injury to any living being); asteya (restraint from stealing); brahmacharya (celibacy or restraint from sexually cheating on one's partner); and aparigraha (restraint from covetousness and craving). Patanjali considers satya as a restraint from falsehood in one's action (body), words (speech, writing) or feelings / thoughts (mind).[6][26] In Patanjali's teachings, one may not always know the truth or the whole truth, but one knows if one is creating, sustaining or expressing falsehood, exaggeration, distortion, fabrication or deception.[25] Satya is, in Patanjali's Yoga, the virtue of restraint from such falsehood, either through silence or through stating the truth without any form of distortion.[27]

Jainism considers satya to be one of its five core principles and all sadhus must take a vow to adhere to it.[citation needed]

The term satya (Sanskrit; in Pali: sacca) is translated in English as "reality" or "truth." In terms of the Four Noble Truths (ariya-sacca), the Pali can be written as sacca, tatha, anannatatha and dhamma.

In post-canonical Theravada and Mahayana literature, sacca is seen as twofold: conventional and ultimate (sammuti sacca and paramattha sacca). The phenomenon which have their own characteristic, including those that are conditioned and Nibbana (which is unconditioned), are collectively called ultimate reality. The uncharacteristic that can found as collectively but not in the unsubstantial, in any context, comes under conventional.

"Mere suffering exists, no sufferer is found. The deed is, but no doer of the deed is there. 'Nibbana' is, but not the man that enters it. The path is, but no traveler on it is seen." (Visuddhimagga XVI)

The Buddhist practice mainly deals with ultimate reality while Buddhist teaching explicates both.

In Sikhism, Sach (ਸਚ, Satya, Truth) is the most important virtue which Sikhs try to develop during their life.[citation needed] God is Truth and by trying to ‘practise truth’ (i.e. live a truthful life), Sikhs believe that they can live in accordance with God’s will - hukam - which teaches that: Truth is not just about speaking the truth but also about recognizing and living in line with the true nature of reality. Acting justly towards others, honesty, treating everyone as equals and avoiding criticising others are all examples of truthful living for Sikhs.[citation needed]

The Gurmukhs do not like falsehood; they are imbued with Truth; they love only Truth. The shaaktas, the faithless cynics, do not like the Truth; false are the foundations of the false. Imbued with Truth, you shall meet the Guru. The true ones are absorbed into the True Lord.

In addition to Satya other four qualities in the arsenal of five that a Sikh must wear are Contentment (Santokh), Compassion (Daya), Humility (Nimrata) and Love (Pyare). These five qualities are essential for Sikhs and it is their duty to meditate and recite the Gurbani so that these virtues become a part of their mind set.[citation needed]

There are many references, properties and explanations of truth by Hindu sages that explain varied facets of truth, such as:[citation needed]

Combined with other words, satya acts as modifier, implying truthful. For example, Satya Loka is the "place of truth", and Satya Yuga is the "Age of Truth" - one of the four cyclical cosmic ages in Hinduism.

The motto of the republic of India's emblem is Satyameva Jayate which is literally translated as 'Truth alone triumphs'.