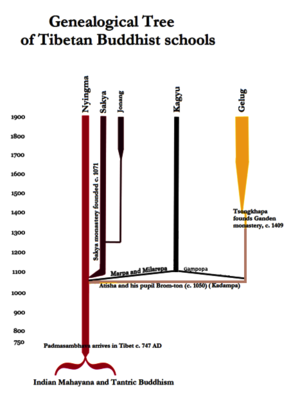 Diagram of the origin and growth of major schools of Tibetan Buddhism.

In Tibet, distinct schools of Tibetan Buddhism arose due to differences in the time of translation of texts from India and the development of lineages formed by particular teachers.[1]

The smaller Jonang school, which branched off from the Sakya school, is sometimes identified as a separate school.

The Bon tradition is also sometimes grouped with the above four or five schools.

According to Alexander Berzin, the four main schools overlap markedly, such that "about eighty percent or more of the features of the Tibetan schools are the same".[3] Differences include the use of different terminology to indicate equivalent concepts, opening dedications of texts to different deities and whether phenomena are described from the viewpoint of an unenlightened practitioner or of a Buddha.[3]

The 14th Dalai Lama also emphasizes that the four main schools have no fundamental differences on questions of philosophy.[4]

There are two main branches of the Kaygu school, both of which trace their origins back through the Indian tantric practioner Tilopa and his student Naropa. The Dagpo Kagyu lineage trace themselves back to Niropa's student Marpa Lotsawa, a great Tibetan translator who traveled to India to recieve teachings from Niropa. Marpa passed his teachings onto his greatest student Milarepa, a famouse 11th-century mystic. Milerapa's student Gampopa is recognized that the founder of Dagpo Kagyu.[5]

The Shangpa Kagyu trace there lineage back to Naropa, as well as two female trantric practitioners – Niguma and Sukhasiddhi. The late Kalu Rinpoche came from this tradition.[5]

The Sakya tradition was the second to arise from the new transmission period at the end of the 10th century. The Sakya lineage derives from the Indian yogi Virupa and some other translators.

Their main teaching from Virupa is known as “lamdre” – lam is path and dre is result. This “path and its results” system is a combination of lam-rim type material conjoined with the tantric practice of Hevajra.[5]

This leader of this tradition is called the Sakya Trizin. The Sakya Pandita (1182–1251CE) was one of its most famous exponents.

The Gelug school was originally a reformist movement and is known for its emphasis on logic and debate. The order was founded in the 14th to 15th century by Je Tsongkhapa, renowned for both his scholarship and virtue. Its spiritual head is the Ganden Tripa and its temporal one the Dalai Lama. The Dalai Lama is regarded as the embodiment of Avalokiteśvara. Successive Dalai Lamas ruled Tibet from the mid-17th to mid-20th centuries.

Classifications of Nyingma and Sarma

These four major schools are sometimes categorized as belonging to an earlier and later tranmissions. In this context, the categories are:

The Jonang is a minor school that branched off from the Sakya tradition. It was suppressed in 1650 in Gelug-controlled regions and subsequently banned; many of its monks and nuns converted to the Gelug school in 1658.

The Jonang re-established their center of activiy in the Golok, Nakhi and Mongol areas of Kham and Amdo--centered at Dzamthang Monastery. An estimated 5,000 monks and nuns of the Jonang tradition practice today in these areas and at the edges of historic Gelug influence.

Their teachings were limited to these regions until the Rimé movement of the 19th century encouraged the study of non-Gelug schools of thought and practice.[6] In modern times, the Jonang schools has been encouraged to grow by the 14th Dalai Lama, who installed the 9th Jebtsundamba Khutughtu as its head.