The Shaolin Monastery (Chinese: 少林寺; pinyin: Shàolín sì), also known as the Shaolin Temple, is a Chan ("Zen") Buddhist temple in Dengfeng County, Henan Province, China. Dating back 1,500 years when founded by Fang Lu-Hao, Shaolin Temple is the main temple of the Shaolin school of Buddhism to this day.

Shaolin Monastery and its Pagoda Forest were inscribed as a UNESCO World Heritage Site in 2010 as part of the "Historic Monuments of Dengfeng".[1]

The name refers to the forests of Shaoshi (少室; Shǎo Shì) mountain, one of the seven peaks of the Song mountains. The first Shaolin Monastery abbot was Batuo (also called Fotuo or Buddhabhadra), a dhyāna master who came to China from India[2] or from Greco-Buddhist Central Asia[3] in 464 AD to spread Buddhist teachings.

According to the Continued Biographies of Eminent Monks (645 AD) by Daoxuan, Shaolin Monastery was built on the north side of Shaoshi, the central peak of Mount Song, one of the Sacred Mountains of China, by Emperor Xiaowen of the Northern Wei dynasty in 477 AD, to accommodate the India master beside the capital Luoyang city. Yang Xuanzhi, in the Record of the Buddhist Monasteries of Luoyang (547 AD), and Li Xian, in the Ming Yitongzhi (1461), concur with Daoxuan's location and attribution. The Jiaqing Chongxiu Yitongzhi (1843) specifies that this monastery, located in the province of Henan, was built in the 20th year of the Taihe era of the Northern Wei dynasty, that is, the monastery was built in 495 AD.

The Kangxi Emperor of the Qing dynasty was a supporter of Shaolin Temple, and he wrote the calligraphic inscriptions that still hang over the Heavenly King Hall and the Buddha Hall today.[4] 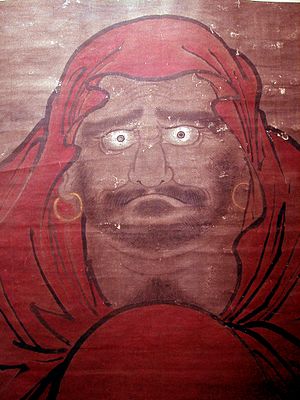 Picture of Bodhidharma at Himeji Castle.

Traditionally Bodhidharma is credited as founder of the martial arts at the Shaolin Temple. However, martial arts historians have shown this legend stems from a 17th-century qigong manual known as the Yijin Jing.[5]

The authenticity of the Yi Jin Jing has been discredited by some historians including Tang Hao, Xu Zhen and Ryuchi Matsuda. This argument is summarized by modern historian Lin Boyuan in his Zhongguo wushu shi:

As for the "Yi Jin Jing" (Muscle Change Classic), a spurious text attributed to Bodhidharma and included in the legend of his transmitting martial arts at the temple, it was written in the Ming dynasty, in 1624, by the Daoist priest Zining of Mt. Tiantai, and falsely attributed to Bodhidharma. Forged prefaces, attributed to the Tang general Li Jing and the Southern Song general Niu Gao were written. They say that, after Bodhidharma faced the wall for nine years at Shaolin temple, he left behind an iron chest; when the monks opened this chest they found the two books "Xi Sui Jing" (Marrow Washing Classic) and "Yi Jin Jing" within. The first book was taken by his disciple Huike, and disappeared; as for the second, "the monks selfishly coveted it, practicing the skills therein, falling into heterodox ways, and losing the correct purpose of cultivating the Real. The Shaolin monks have made some fame for themselves through their fighting skill; this is all due to having obtained this manuscript". Based on this, Bodhidharma was claimed to be the ancestor of Shaolin martial arts. This manuscript is full of errors, absurdities and fantastic claims; it cannot be taken as a legitimate source.[6]

The oldest available copy was published in 1827.[7] The composition of the text itself has been dated to 1624.[6] Even then, the association of Bodhidharma with martial arts only became widespread as a result of the 1904–1907 serialization of the novel The Travels of Lao Ts'an in Illustrated Fiction Magazine:[8]

One of the most recently invented and familiar of the Shaolin historical narratives is a story that claims that the Indian monk Bodhidharma, the supposed founder of Chinese Chan (Zen) Buddhism, introduced boxing into the monastery as a form of exercise around a.d. 525. This story first appeared in a popular novel, The Travels of Lao T’san, published as a series in a literary magazine in 1907. This story was quickly picked up by others and spread rapidly through publication in a popular contemporary boxing manual, Secrets of Shaolin Boxing Methods, and the first Chinese physical culture history published in 1919. As a result, it has enjoyed vast oral circulation and is one of the most “sacred” of the narratives shared within Chinese and Chinese-derived martial arts. That this story is clearly a twentieth-century invention is confirmed by writings going back at least 250 years earlier, which mention both Bodhidharma and martial arts but make no connection between the two.[9]

Other scholars see an earlier connection between Da Mo and the Shaolin Monastery. Scholars generally accept the historicity of Da Mo (Bodhidharma) who arrived in China from his country India around 480. Da Mo (Bodhidharma) and his disciples are said to have lived a spot about a mile from the Shaolin Temple that is now a small nunnery. [10] In the 6th century, around 547, The Record of the Buddhist Monasteries says Da Mo visited the area near Mount Song.[11][12] In 645 The Continuation of the Biographies of Eminent Monks describes him as being active in the Mount Song region.[12][13] Around 710 Da Mo is identified specifically with the Shaolin Temple (Precious Record of Dharma's Transmission or Chuanfa Baoji) [12][14] and writes of his sitting facing a wall in meditation for many years. It also speaks of Huikes many trials in his efforts to receive instruction from Da Mo. In the 11th century a (1004) work embellishes Da Mo legends with great detail. A stele inscription at the Shaolin Monastery dated 728 reveals Da Mo residing on Mount Song.[15] Another stele in 798 speaks of Huike seeking instruction from Da Mo. Another engraving dated 1209 depicts the barefoot saint holding a shoe according to the ancient legend of Da Mo. A plethora of 13th- and 14th-century steles feature Da Mo in Various roles. One 13th-century image shows him riding a fragile stalk across the Yangtze River.[16] In 1125 a special temple was constructed in his honor at the Shaolin Monastery.[17]

The monastery has been destroyed and rebuilt many times. During the Red Turban Rebellion in the 14th century, bandits ransacked the monastery for its real or supposed valuables, destroying much of the temple and driving the monks away. The monastery was likely abandoned from 1351 or 1356 (the most likely dates for the attack) to at least 1359, when government troops retook Henan. The events of this period would later figure heavily in 16th-century legends of the temple's patron saint Vajrapani, with the story being changed to claim a victory for the monks, rather than a defeat.[18]

In 1641, rebel forces led by Li Zicheng sacked the monastery due to the monks' support of the Ming dynasty and the possible threat they posed to the rebels. This effectively destroyed the temple's fighting force.[19] The temple fell into ruin and was home to only a few monks until the early 18th century, when the government of the Qing dynasty patronized and restored the temple.[20]

Perhaps the best-known story of the Temple's destruction is that it was destroyed by the Qing government for supposed anti-Qing activities. Variously said to have taken place in 1647 under the Shunzhi Emperor, in 1674, 1677, or 1714 under the Kangxi Emperor, or in 1728 or 1732 under the Yongzheng Emperor, this destruction is also supposed to have helped spread Shaolin martial arts through China by means of the five fugitive monks. Some accounts claim that a supposed southern Shaolin Temple was destroyed instead of, or in addition to, the temple in Henan: Ju Ke, in the Qing bai lei chao (1917), locates this temple in Fujian province. These stories commonly appear in legendary or popular accounts of martial history, and in wuxia fiction.

While these latter accounts are popular among martial artists, and often serve as origin stories for various martial arts styles, they are viewed by scholars as fictional. The accounts are known through often inconsistent 19th-century secret society histories and popular literature, and also appear to draw on both Fujianese folklore and popular narratives such as the classical novel Water Margin. Modern scholarly attention to the tales is mainly concerned with their role as folklore.[21][22][23][24]

There is evidence of Shaolin martial arts being exported to Japan since the 18th century. Martial arts such as Okinawan Shōrin-ryū (小林流) style of Karate, for example, has a name meaning "Shaolin School"[25] and the Japanese Shorinji Kempo (少林寺拳法) is translated as "Shaolin Temple Fist Method". Other similarities can be seen in centuries-old Chinese and Japanese martial arts manuals.[26]

In 1928, the warlord Shi Yousan set fire to the monastery, burning it for over 40 days, destroying a significant percent of the buildings, including many manuscripts of the temple library.[27]

The Cultural Revolution launched in 1966 targeted religious orders including the monastery. The five monks who were present at the monastery when the Red Guards attacked were shackled and made to wear placards declaring the crimes charged against them.[27] The monks were jailed after publicly being flogged and paraded through the street as people threw rubbish at them.[27] The government purged Buddhist materials from within the monastery walls, leaving it barren for years.

Martial arts groups from all over the world have made donations for the upkeep of the temple and grounds, and are subsequently honored with carved stones near the entrance of the temple.

According to legend, Emperor Taizong granted the Shaolin Temple extra land and a special "imperial dispensation" to consume meat and alcohol during the Tang dynasty. If true, this would have made Shaolin the only temple in China that did not prohibit alcohol. Regardless of historical veracity, these rituals are not practiced today.[28] This legend is not corroborated in any period documents, such as the Shaolin Stele erected in 728. The stele does not list any such imperial dispensation as reward for the monks' assistance during the campaign against Wang Shichong, only land and a water mill are granted.[29]

In the past, many have tried to capitalise on Shaolin Monastery fame by building their own schools on Mount Song. However, the Chinese government eventually outlawed this; the schools were moved to the nearby towns. A dharma gathering was held from August 19 to August 20, 1999, in Shaolin Monastery for Shi Yongxin's assumption of office as abbot. In March 2006, Russian President Vladimir Putin became the first foreign leader to visit the monastery. In 2007, the Chinese government partially lifted the 300-year ban of the Jieba, the ancient ceremony of the nine marks which are burned onto the head with sticks of incense. The ban was lifted only for those who were mentally and physically prepared to participate in the tradition.

Two modern bathrooms were recently added to the temple for use by monks and tourists. The new bathrooms reportedly cost three million yuan to build.[30] Films have also been released like Shaolin Temple[31] and more recently, Shaolin starring Andy Lau.

A number of traditions make reference to a Southern Shaolin Monastery located in Fujian province.[32] There has also been a Northern Shaolin monastery in northern China. Associated with stories of the supposed burning of Shaolin by the Qing government and with the tales of the Five Elders, this temple, sometimes known by the name Changlin, is often claimed to have been either the target of Qing forces or a place of refuge for monks displaced by attacks on the Shaolin Monastery in Henan. Besides the debate over the historicity of the Qing-era destruction, it is currently unknown whether there was a true southern temple, with several locations in Fujian given as the location for the monastery. Fujian does have a historic monastery called Changlin, and a monastery referred to as a "Shaolin cloister" has existed in Fuqing, Fujian, since the Song dynasty, but whether these have an actual connection to the Henan monastery or a martial tradition is still unknown.[33] The Southern Temple has been a popular subject of wuxia fiction, first appearing in the 1893 novel Shengchao Ding Sheng Wannian Qing, where it is attacked by the Qianlong Emperor with the help of the White Eyebrow Taoist.[34]