For other uses, see Shudra (disambiguation).

Shudra (Sanskrit: शूद्र, IAST: śūdra) is a varna (class, caste) in Hinduism.[1] Various sources translate it into English as a caste,[1] or alternatively as a social class.[2] It is the lowest rank of the four varnas.[3]

The word Shudra appears only once in the Rig veda but is found in other Hindu texts such as the Manusmriti, Arthashastra and Dharmashastras, Bhagwat Gita. Theoretically, Shudras have constituted the hereditary labouring class serving others[1][4] but in reality they have shared occupations with other varnas, including being traders and warriors.[5][6][7] In some cases, they participated in the coronation of kings, or were ministers and kings according to early Indian texts.[8][9]

While the Rigveda was most likely compiled between c. 1500 and 1200 BCE,[14][15] John Muir in 1868 suggested that the verse that mentions the four varnas has "every character of modernness both in its diction and ideas".[16] The Purusha Sukta verse is now generally considered to have been inserted at a later date into the Vedic text, possibly as a charter myth.[17][18] According to Stephanie Jamison and Joel Brereton, a professor of Sanskrit and Religious studies, "there is no evidence in the Rigveda for an elaborate, much-subdivided and overarching caste system", and "the varna system seems to be embryonic in the Rigveda and, both then and later, a social ideal rather than a social reality".[17] Historian R. S. Sharma states that "the Rig Vedic society was neither organized on the basis of social division of labour nor on that of differences in wealth... [it] was primarily organised on the basis of kin, tribe and lineage."[19]

According to Romila Thapar, the Vedic text's mention of Shudra and other varnas has been seen as its origin, and that "in the varna ordering of society, notions of purity and pollution were central and activities were worked out in this context" and it is "formulaic and orderly, dividing society into four groups arranged in a hierarchy".[4]

The word Pusan appears in a Vedic era Upanishad, meaning "nourisher" and associates it with the creation of earth and production activities that nourishes the whole world, and the text calls this Pusan as Shudra.[20][21] The term Pusan, in Hindu mythology, is the charioteer of the sun who know the paths thereby bringing light, knowledge and life to all.[22] The same word Pusan is, however, associated in a Brahmana text to Vaishya.[21]

According to Sharma, nowhere in the Vedic text collections "is there any evidence of restrictions regarding food and marriage either between the Dasa and Aryan, or between the Shudra and the higher varnas". Further, adds Sharma, in late Atharva Veda, "Shudra does not come in for notice, probably because his varna did not exist at that stage".[23]

The ancient Hindu text Arthashastra states, according to Sharma, that Aryas were free men and could not be subject to slavery under any circumstances.[24] The text contrasts Aryas with Shudra, but neither as a hereditary slave nor as an economically closed social stratum in a manner that the term Shudra later was interpreted.[10][24][25] According to Rangarajan, the law on labour and employment in Arthashastra has led to a variety of different interpretations by different translators and commentators, and "the accepted view is that slavery, in the form it was practised in contemporary Greece, did not exist in Kautilyan India".[26]

Kautilya argued for the rights of Shudras and all classes to participate as warriors. Roger Borsche says that this is so because it is in the self-interest of the ruler to "have a people's army fiercely loyal to him precisely because the people had been treated justly".[25]

The Manusmriti predominantly discusses the code of conduct (dharma rules) for the Brahmins (priestly class) and the Kshatriyas (king, administration and warrior class).[27] The text mentions Shudras, as well as Vaishyas, but this part is its shortest section. Sections 9.326 – 9.335 of the Manusmriti state eight rules for Vaishyas and two for Shudras.[28]

According to Laurie Patton, a professor of Religion specialising on early Indian religions, the rights and status of Shudra varies widely across early Indian texts.[29] Apastamba Grhysutra states they may not and excludes the Shudra students from hearing or learning the Vedas.[29] Yajnavalkya Smriti in contrast mentions Shudra students, and the Mahabharata states that all four varnas including the Shudras may hear the Vedas.[30][31][32] Other Hindu texts go further and state that the three varnas – Brahmin, Kshatriya, Vaishya – may acquire knowledge from Shudra teachers, and the yajna sacrifices may be performed by Shudras.[33] These rights and social mobility for Shudras may have arisen in times of lower societal stress and greater economic prosperity, periods that also saw the improvement in the social conditions of women.[30]

Medieval era texts such as Vajrasuchi Upanishad discuss varna, and include the term Shudra.[34][35] According to Ashwani Peetush, a professor of Philosophy at the Wilfrid Laurier University, the Vajrasuchi Upanishad is a significant text because it assumes and asserts that any human being from any social background can achieve the highest spiritual state of existence.[36]

Outside of the conflicting stances within the Hindu texts, non-Hindu texts present a different picture about the Shudras. A Buddhist text, states Patton, "refers to Shudras who know the Vedas, grammar, Mimamsa, Samkhya, Vaisheshika and lagna".[29]

According to Johannes Bronkhorst, a professor of Indology specializing on early Buddhism and Hinduism, the ancient Buddhist canon is predominantly devoid of varna discussion, and Shudra and other varnas are rarely referred to in its ancient discourses.[37] The Buddhist texts do not describe the Indian society as divided into the four varṇas of "Brahmins, Ksạtriyas, Vaiśyas and Śūdras". Instead, states Bronkhorst, the bulk of society is described as consisting of "householders" (Pāli: gahapati), without internal distinctions.[37] Even where the Brahmins are mentioned in such a context, they too are referred to as householders, or Brāhmaṇa-gahapati.[38] The term vaṇṇa does appear in the Buddhist texts as few exceptions, but states Bronkhorst, only in the context of abstract divisions of society and it seems to "have remained a theoretical concept without any parallel in actual practice".[39] 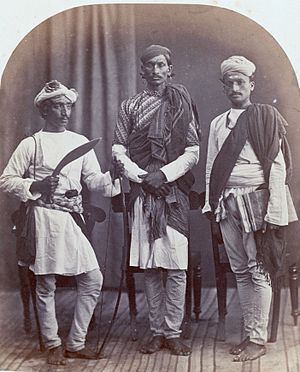 The Shudra, states Marvin Davis, are not required to learn the Vedas. They were not "twice born" (Dvija), and their occupational sphere stated as service (seva) of the other three varna.[3][4] The word Dvija is neither found in any Vedas and Upanishads, nor is it found in any Vedanga literature such as the Shrauta-sutras or Grihya-sutras.[40] The word is almost entirely missing, in any context, from ancient Sanskrit literature composed before the last centuries of the 1st millennium BCE, and it scarcely appears in Dharmasutras literature.[40] Increasing mentions of it appear in Dharmasastras texts of mid to late 1st-millennium CE. The presence of the word Dvija is a marker that the text is likely a medieval era Indian text.[40]

The traditional occupation of Shudra is described as labourers and service providers.[41][42] However, this categorisation varies by scholar.[43] For example, some sources state agriculturalists and artisans to be the hereditary occupation of Vaishya varna, some place these occupations with the Shudra varna, while some such as Charles Drekmeier state "Vaishya and Shudra actually shared many occupations and were frequently grouped together".[2][44][45]

The Arthashastra mentions Shudra as artisans, while the Vishnusmriti (3rd century) states all arts to be their occupational domain. In contrast, the Parasarasmriti and other texts state that arts and crafts are the occupational domain of all four varnas.[46]

Other sources state that this statement of occupations of Shudra is a theoretical discussion found in select texts, it is not historical. Other Hindu texts such as the epics, states Naheem Jabbar, assert that Shudras played other roles such as kings and ministers.[8] According to Ghurye,[47] in reality, the hereditary occupation aspect of Shudra and other varnas was missing from large parts of India, and all four varnas (Brahmins, Kshatriyas, Vaishyas and Shudras) were agriculturalists, traders or became warriors in large numbers depending on economic opportunity and circumstantial necessities.[48] According to Ghurye:

Though theoretically the position of the Shudras was very low, there is evidence to show that many of them were well-to-do. Some of them succeeded in marrying their daughters in royal families. Sumitra, one of the four wives of king Dasharatha, was a Shudra. Some of them even worked their way up to throne. The famous Chandragupta is traditionally known to be a Shudra.

Among the Hindu communities of Bali Indonesia, the Shudra (locally spelled Soedra) have typically been the temple priests, though depending on the demographics, a temple priest may also be a Brahmin (Brahmana), Kshatriya (Ksatrya) or Vaishya (Vesya). In most regions, it has been the Shudra who typically make offerings to the gods on behalf of the Hindu devotees, chant prayers, recite meweda (Vedas), and set the course of Balinese temple festivals.[50]

Varna is rarely mentioned in the extensive medieval era records of Andhra Pradesh, for example. This has led Cynthia Talbot, a professor of History and Asian Studies, to question whether varna was socially significant in the daily lives of this region. The mention of jati is even rarer, through the 13th century. Two rare temple donor records from warrior families of the 14th century claim to be Shudras. One states that Shudras are the bravest, the other states that Shudras are the purest.[51]

Richard Eaton, a professor of History, writes, "anyone could become warrior regardless of social origins, nor do the jati appear as features of people's identity. Occupations were fluid." Evidence shows, according to Eaton, that Shudras were part of the nobility, and many "father and sons had different professions, suggesting that social status was earned, not inherited" in the Hindu Kakatiya population in the Deccan region between the 11th and 14th centuries.[53]

Historical evidence left by Buddhist rulers in ancient and medieval India do not mention Shudra. For example, according to Johannes Bronkhorst, none of Ashoka's inscriptions mention the terms Kshatriyas, Vaishyas or Shudras, and only mention Brahmins and Śramaṇas.[54]

Several popular medieval era Bhakti movement poet-saints and religious leaders were born in a Shudra family. Examples include Tukaram and Namdev.[55][56] The compositions of Namdev have been popular not only in the Hindu community of Maharashtra, but also in the Sikh community. Sixty of his compositions were included by the Sikh Gurus of Punjab region as they compiled the Sikhism scripture the Guru Granth Sahib.[57][58] 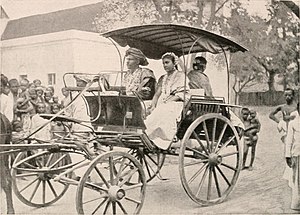 A 1908 photo of a bride and bridegroom of the sudra caste in a horse-drawn vehicle.[59]

Dr. Ambedkar, a social reformer, believed that there were initially only three varnas: the Brahmin, Kshatriya and Vaishya, and that the Shudras were the Kshatriyas who were denied the Upanayana, an initiation ritual, by the Brahmins.[60] This claim has been contested by historians such as R. S. Sharma.[61]

Sri Aurobindo states Shudra and the other varna is a concept found in all human beings in different proportions. He states that this was externalised and mechanised into a system quite different from what it was intended.[62]

The tenets of Vedic Hinduism in north India held less sway in the south, where the societal divisions were simply Brahmin and Shudra. However, some non-Brahmins adopted the classification of Sat Shudra (clean Shudra) in an attempt to distinguish themselves from other non-Brahmin communities.[63]