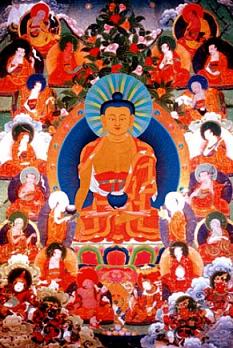 The sixteen arhats (C. shiliu luohan 十六羅漢), or sixteen elders (Skt. ṣoḍaśasthavirā; T. gnas brtan bcu drug གནས་བརྟན་བཅུ་དྲུག; C. shiliu zunzhe 十六尊者) are a group of sixteen arhat disciples whom Gautama Buddha asked to remain in this world to protect the his teachings until the arrival of the future Buddha Maitreya.[1] When Maitreya arrives, the group of arhats will gather together and build one last stupa for Gautama Buddha before passing into parinirvana.[1]

This group of arhats is identified in the texts of the Sanskrit tradition and they are recognized in the East Asian and Tibetan traditions.

This group is first recorded in texts of the Tang Dynasty in China, and they came to be revered and China and appear frequently in East Asian Art.[1] In Japan sixteen Arhats are particularly popular in Zen Buddhism, where they are treated as examples of good behaviour.[2]

In Tibet, the sixteen Arhats, also known as sixteen Elders (sthaviras), are the subject of a liturgical practice associated with the festival of the Buddha's birth.[3] They are also well represented in Tibetan art.[4]

In China, some later texts identified an expanded group of Eighteen Arhats.

The sixteen Arhats that are identified in the East Asian tradition are listed below. (The Tibetan tradition has a slightly different list.[5])