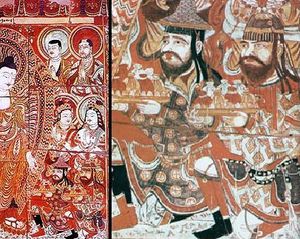 The Sogdian language was an Eastern Iranian language spoken in the Central Asian region of Sogdia, located in modern-day Uzbekistan, and Tajikistan (capital: Samarkand; other chief cities: Panjakent, Fergana, Khujand, and Bukhara), as well as some Sogdian immigrant communities in ancient China. Sogdian is one of the most important Middle Iranian languages, along with Bactrian, Khotanese Saka, Middle Persian, and Parthian. It possesses a large literary corpus.

The Sogdian language is usually assigned to a Northeastern group of the Iranian languages. No direct evidence of an earlier version of the language ("Old Sogdian") has been found, although mention of the area in the Old Persian inscriptions means that a separate and recognisable Sogdia existed at least since the Achaemenid Empire (559–323 BCE).

Like Khotanese, Sogdian possesses a more conservative grammar and morphology than Middle Persian. The modern Eastern Iranian language Yaghnobi is the descendant of a dialect of Sogdian spoken around the 8th century in Osrushana, a region to the south of Sogdia. 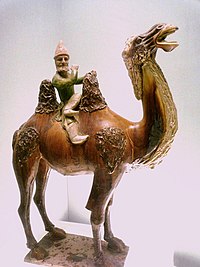 The finding of manuscript fragments of the Sogdian language in China's Xinjiang region sparked the study of the Sogdian language. Robert Gauthiot, (the first Buddhist Sogdian scholar) and Paul Pelliot, (who while exploring in Dunhuang, retrieved Sogdian material) began investigating the Sogdian material that Pelliot had discovered. Gauthiot published many articles based on his work with Pelliot's material, but died during the First World War. One of Gauthiot's most impressive articles was a glossary to the Sogdian text, which he was in the process of completing when he died. This work was continued by Émile Benveniste after Gauthiot's death.[1]

Various Sogdian pieces have been found in the Turfan text corpus by the German Turfan expeditions. These expeditions were controlled by the Ethnological Museum of Berlin.[1] These pieces consist almost entirely of religious works by Manichaean and Christian writers, including translations of the Bible. Most of the Sogdian religious works are from the 9th and 10th centuries.[2]

Dunhuang and Turfan were the two most plentiful sites of Manichean, Buddhist, and Christian Sogdian texts. Sogdiana itself actually contained a much smaller collection of texts. These texts were business related, belonging to a minor Sogdian king, Divashtich. These business texts dated back to the time of the Muslim conquest, about 700.[2]