Standard Tibetan[1] is the most widely spoken form of the Tibetic languages. It is based on the speech of Lhasa, an Ü-Tsang (Central Tibetan) dialect. For this reason, Standard Tibetan is often called Lhasa Tibetan.[2] Tibetan is an official[3] language of the Tibet Autonomous Region of the People's Republic of China. The written language is based on Classical Tibetan and is highly conservative.

Like many languages, Standard Tibetan has a variety of language registers: 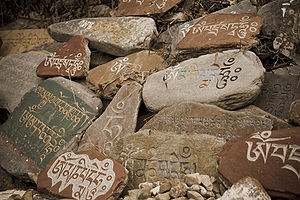 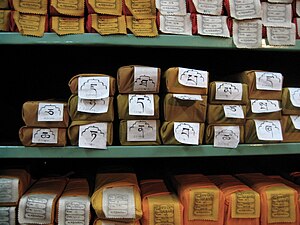 Pejas, scriptures of Tibetan Buddhism, at a library in Dharamsala, India

Unlike many other languages of East Asia and especially Chinese, another Sino-Tibetan language, there are no numeral auxiliaries or measure words used in counting in Tibetan although words expressive of a collective or integral are often used after the tens, sometimes after a smaller number.

In scientific and astrological works, the numerals, as in Vedic Sanskrit, are expressed by symbolical words.

Tibetan is written with an Indic script, with a historically conservative orthography that reflects Old Tibetan phonology and helps unify the Tibetan-language area.

Wylie transliteration is the most common system of romanization used by Western scholars in rendering written Tibetan using the Latin alphabet (such as employed on much of this page). Tibetan pinyin, however, is the official romanization system employed by the government of the People's Republic of China. Certain names may also retain irregular transcriptions, such as Chomolungma for Mount Everest.

The following summarizes the sound system of the dialect of Tibetan spoken in Lhasa, the most influential variety of the spoken language.

Phonemic vowel length exists in Lhasa Tibet but in a restricted set of circumstances. Assimilation of Classical Tibetan's suffixes, normally ‘i (འི་), at the end of a word produces a long vowel in Lhasa Tibetan; the feature is sometimes omitted in phonetic transcriptions. In normal spoken pronunciation, a lengthening of the vowel is also frequently substituted for the sounds [r] and [l] when they occur at the end of a syllable.

The Lhasa dialect is usually described as having two tones: high and low. However, in monosyllabic words, each tone can occur with two distinct contours. The high tone can be pronounced with either a flat or a falling contour, and the low tone can be pronounced with either a flat or rising-falling contour, the latter being a tone that rises to a medium level before falling again. It is normally safe to distinguish only between the two tones because there are very few minimal pairs that differ only because of contour. The difference occurs only in certain words ending in the sounds [m] or [ŋ]; for instance, the word kham (Tibetan: ཁམ་, "piece") is pronounced [kʰám] with a high flat tone, whereas the word Khams (Tibetan: ཁམས་, "the Kham region") is pronounced [kʰâm] with a high falling tone.

In polysyllabic words, tone is not important except in the first syllable.

The three moods may all occur with all three grammatical persons, though early descriptions associated the personal modal category with European first-person agreement.[5]

In much of Tibet, primary education is conducted either primarily or entirely in the Tibetan language, and bilingual education is rarely introduced before students reach middle school. However, Chinese is the language of instruction of most Tibetan secondary schools. Students who continue on, to tertiary education, have the option of studying humanistic disciplines in Tibetan at a number of minority colleges, in China.[6] That contrasts with Tibetan schools in Dharamsala, India, where the Ministry of Human Resource Development curriculum requires academic subjects to be taught in English from middle school.[7] Literacy and enrollment rates continue to be the main concern of the Chinese government. Much of the adult population in Tibet remains illiterate, and despite compulsory education policies, many parents in rural areas are unable to send their children to school.

In February 2008, Norman Baker, a UK MP, released a statement to mark International Mother Language Day claiming, "The Chinese government are following a deliberate policy of extinguishing all that is Tibetan, including their own language in their own country" and he asserted a right for Tibetans to express themselves "in their mother tongue".[8] However, Tibetologist Elliot Sperling has noted that "within certain limits the PRC does make efforts to accommodate Tibetan cultural expression" and "the cultural activity taking place all over the Tibetan plateau cannot be ignored."[9]

Some scholars also question such claims because most Tibetans continue to reside in rural areas where Chinese is rarely spoken, as opposed to Lhasa and other Tibetan cities where Chinese can often be heard. In the Texas Journal of International Law, Barry Sautman stated that "none of the many recent studies of endangered languages deems Tibetan to be imperiled, and language maintenance among Tibetans contrasts with language loss even in the remote areas of Western states renowned for liberal policies... claims that primary schools in Tibet teach Mandarin are in error. Tibetan was the main language of instruction in 98% of TAR primary schools in 1996; today, Mandarin is introduced in early grades only in urban schools.... Because less than four out of ten TAR Tibetans reach secondary school, primary school matters most for their cultural formation."[10]

The most important Tibetan branch of language under threat is, however, the Ladakhi language of the Western Tibetan group, in the Ladakh region of India. In Leh, a slow but gradual process is underway whereby the Tibetan vernacular is being supplanted by English and Hindi, and there are signs of a gradual loss of Tibetan cultural identity in the area. The adjacent Balti language is also in severe danger, and unlike Ladakhi, it has already been replaced by Urdu as the main language of Baltistan, particularly due to settlers speaking Urdu from other areas moving to that area.