From Encyclopedia of Buddhism
(Redirected from Subhuti)
Jump to: navigation, search 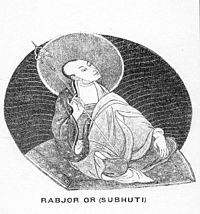 A Tibetan illustration of Subhūti, where he is known as Rabjor.

Subhūti (Pali: Subhūti; Chinese: 须菩提; pinyin: Xūpútí) was one of the Ten Great Sāvakas of Gotama Buddha, and foremost in giving gifts. In Prakrit and Pāli, his name literally means "Good Existence" (su: "good", bhūti: "existence"). He is also sometimes referred to as "Elder Subhūti" (Subhūti Thera). He was a contemporary of such famous arahants as Sāriputta, Mahakassapa, Mahāmoggallana, Mahākaccāna and Ānanda.

In Theravada Buddhism, Subhūti is famed as the monk who was most worthy of gifts due to his practice of absorption on loving-kindness (mettā-jhāna) before receiving almsfood.

He was the son of Sumanaseṭṭhī and the younger brother of Anāthapiṇḍika. On the day of the dedication of Jetavana, he heard the Buddha teach and left the world. After ordination he mastered the two categories of Vinaya rules, and, after obtaining a subject for meditation, lived in the forest. There he developed insight, and attained Arahantship on the basis of mettā-jhāna. Teaching the Dhamma without distinction or limitation, he was declared chief of those who lived remote and in peace (araṇavihārīnaṃ aggo), and of those who were worthy of gifts (dakkhiṇeyyānaṃ) (A.i.24; cf. Ud.vi.7, where the Buddha commends his proficiency in meditation). It is said that when he went begging for alms he would develop mettā-jhāna at each door, hence every gift made to him was of the highest merit. In the course of his travels he came to Rājagaha, and Bimbisāra promised to build him a dwelling-place. However, the king forgot his promise, and Subhūti meditated in the open air. There was no rain, and, discovering the cause, the king had a leaf hut built for him. As soon as Subhūti entered the hut and seated himself cross-legged on the bed of hay, rain began to fall.[1]

In the Lotus Sutra (Skt. Saddharma Puṇḍarīka Sūtra), Chapter 6 (Bestowal of Prophecy), the Buddha bestows prophecies of enlightenment on Subhūti, along with other śrāvakas such as Mahākāśyapa, Mahākātyāyana, and Mahāmaudgalyāyana.

In Zen Buddhism, Subhūti appears in several koans, such as this one:[3]

Lineage of the Panchen Lamas

In the lineage of the Panchen Lamas of Tibet there were considered to be four "Indian" and three Tibetan incarnations of Amitabha Buddha before Khedrup Gelek Pelzang, who is recognised as the first Panchen Lama. The lineage starts with Subhuti.[4][5]

A character based on Subhūti appears in the Chinese classical novel Journey to the West, as the teacher of the Monkey King Sun Wukong.[6] The story of Sun Wukong first meeting Subhūti was a play on the Zen story of Huineng meeting Hongren, as told in the Platform Sūtra of Zen Buddhism. Because of the role that Subhūti plays in the story, his name has remained familiar in Chinese culture.[7]