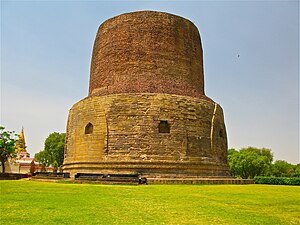 Dhamekh Stupa, Sarnath, where the Buddha is said to have given his first sermon to the first five disciples.

Sutra (S. sūtra; P. sutta; T. mdo; C. jing; J. kyō; K. kyŏng 經). A discourse attributed to the Buddha himself or one of his close disciples speaking under the Buddha's authority. All of the sutras (suttas) are considered to be Buddhavacana, the word of the Buddha.

The teachings of the Buddha were passed down in an oral tradition for several generations before they were put into writing. Geshe Tashi Tsering explains:

The sutras we have now in the Buddhist canon come from actual discourses of the Buddha that were memorized by the Buddha’s disciples and passed down in an oral lineage. Only centuries later were they written down, retaining much of the convention of the oral tradition. The repetition of phrases and even paragraphs was designed for easy memorization, and the whole style was developed to facilitate ritual recitation. As such sutras can be difficult reading, but their content, the actual words of the Buddha, are an infallible map out of the suffering that currently traps us.[1]

Dharma as textual tradition goes back to the teachings heard directly from the Buddha. These teachings were, it seems, memorized by the immediate followers of the Buddha. For several generations perhaps, the teachings of the Buddha were preserved and handed down directly from master to pupil orally without ever being committed to writing. It is tempting for us in the modern world to be sceptical about the reliability of this method of transmission, but it was the norm in ancient India; the use of mnemonic techniques such as the numbered list and frequent repetition of certain portions of the material within a given text aided reliable transmission. Indeed the evidence of the transmission of the Vedic texts, for example, is that oral transmission can be more reliable than a tradition of written texts involving the copying of manuscripts.[2]

First Buddhist council: agreement on content of the teachings

According to a generally accepted ancient tradition, the first attempt to agree the form of the Buddhist textual tradition, what was remembered as the authoritative ‘word of the Buddha’, took place some three months after the Buddha’s death at the town of Rājagṛha (Pali Rājagaha) in northern India when 500 arhats took part in a ‘communal recitation’ (saṃgīti). This event is commonly referred to in modern writings as ‘the first Buddhist council’. Significantly the earliest Buddhist tradition attempts to resolve any tension between theory and practice by insisting that the first communal recitation of scriptures was carried out by 500 individuals who had each realized direct and perfect knowledge of Dharma.[2]

At this stage, the agreed upon teachings were propagated through a system of oral recitation and memorization. These teachings were generally classified into two categories:

A third category of teachings, known as the Abhidharma, was later added to the first two categories. Over time, these categories of teaching came to be knowns as the three pitakas.

Each of the early schools of Buddhism developed their own versions of the three pitakas.

According to tradition, the texs of the Pali versions of the three pitakas were written down for the first time in the first century BCE.[3]

Presumably, the Sanskrit recensions of the Early Buddhist Texts were written down in the same time period. (This needs to be verified.)

Regarding the first discourse of the Buddha, the Dhammacakkappavattana Sutta, contemporary scholar Richard Gombrich states:[4]

Of course we do not really know what the Buddha said in his first sermon ... and it has even been convincingly demonstrated[lower-alpha 1] that the language of the text as we have it is in the main a set of formulae, expressions which are by no means self-explanatory but refer to already established doctrines. Nevertheless, the compilers of the Canon put in the first sermon what they knew to be the very essence of the Buddha's Enlightenment.

After the passing away of the Buddha, a variety of different "schools" of Buddhism developed in India, each with it's own version of the three pitakas--the three collections of:

Editions of these early texts are found today within two broad traditions:

The editions of these early sutras that are included in the three major Buddhist canons are often referred to as parallel texts, due to their striking similarity. These early sutras define a set of shared tenets that are accepted by all Buddhist traditions.

Mahayana sutras began to appear in Northern India beginning in the first or second century CE and they had a great influence of the Sanskrit traditions of that area.

The Mahayana sutras differ from the early sutras as follows:

The Mahayana texts were originally written in Sanskrit and then translated into the Chinese and Tibetan languages. They are accepted as the word of the Buddha by:

However, these texts are not included in the Pali Canon, and hence not considered as the authentic word of the buddha by the Theravada tradition.