Tashi Lhunpo Monastery (Tibetan: བཀྲ་ཤིས་ལྷུན་པོ་), founded in 1447 by the 1st Dalai Lama,[1] is a historic and culturally important monastery in Shigatse, the second-largest city in Tibet.

The monastery was sacked when the Gorkha Kingdom invaded Tibet and captured Shigatse in 1791 before a combined Tibetan and Chinese army drove them back as far as the outskirts of Kathmandu,[2] when they were forced to agree to keep the peace in the future, pay tribute every five years, and return what they had looted from Tashi Lhunpo.[3]

The monastery is the traditional seat of successive Panchen Lamas, the second highest ranking tulku lineage in the Gelug tradition of Tibetan Buddhism. The "Tashi" or Panchen Lama had temporal power over three small districts, though not over the town of Shigatse itself, which was administered by a dzongpön (prefect) appointed from Lhasa.[4]

Located on a hill in the center of the city, the full name in Tibetan of the monastery means "all fortune and happiness gathered here" or "heap of glory". Captain Samuel Turner, a British officer with the East India Company who visited the monastery in the late 18th century, described it in the following terms: 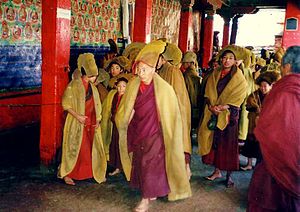 "If the magnificence of the place was to be increased by any external cause, none could more superbly have adorned its numerous gilded canopies and turrets than the sun rising in full splendour directly opposite. It presented a view wonderfully beautiful and brilliant; the effect was little short of magic, and it made an impression which no time will ever efface from my mind."[5]

Pilgrims circumambulate the monastery on the lingkhor (sacred path) outside the walls.

Although two-thirds of the buildings were destroyed during the excesses of the Chinese Cultural Revolution, they were mainly the residences for the 4,000 monks[6][7] and the monastery itself was not as extensively damaged as most other religious structures in Tibet, for it was the seat of the Panchen Lama who remained in Chinese-controlled territory.

However, during 1966 Red Guards led a crowd to break statues, burn scriptures and open the stupas containing the relics of the 5th to 9th Panchen Lamas, and throw them in the river. Some remains, though, were saved by locals, and in 1985, Choekyi Gyaltsen, 10th Panchen Lama, began the construction of a new stupa to house them and honour his predecessors. It was finally consecrated on 22 January 1989, just six days before he died aged fifty-one at Tashi Lhunpo. "It was as if he was saying now he could rest."[8] 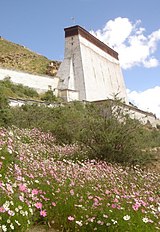 The Thanka Wall overlooking the monastery

The monastery was founded in 1447 CE by Gedun Drub, the disciple of the famous Buddhist philosopher Je Tsongkhapa and later named the First Dalai Lama. The construction was financed by donations from local nobles. 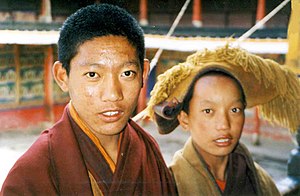 Later Lobsang Chökyi Gyalsten, the Fourth Panchen Lama and the first Panchen Lama to be recognized as such by the rulers of Mongolia, made major expansions to the monastery. Since then, all Panchen Lamas have resided at Tashi Lhunpo, and have managed to expand it gradually.

In 1791 the monastery was attacked and looted by an army of Nepalese Gurkha warriors but were driven out by the Chinese who simultaneously strengthened their control over the temple and Tibet.

Tashi Lhunpo in its heyday housed over 4,000 monks and had four Tantric colleges, each with its own Abbot. After the death of a Panchen Lama, these four abbots led the search for his infant reincarnation and one of them always acted as a prime minister of Tsang under the control of the Dalai Lama in Lhasa.

In 1960, the monastery was dismantled by the Chinese army whilst the Panchen Lama was absent, although less damage was inflicted on the monastery than on most others around Tibet.

During the 1960s many senior lamas and monastics left Tibet and helped re-establish new monasteries in India, Nepal and Bhutan. The late Panchen Lama did not leave Tibet and consequently many of the senior lamas from Tashi Lhunpo Monastery remained inside Tibet. Therefore, while other monasteries-in-exile have expanded and developed under the guidance of senior lamas, Tashi Lhunpo has remained at a disadvantage, although in 1972 a new campus of Tashi Lhunpo Monastery was built by Tibetan exiles at a settlement in Bylakuppe, Karnātakā in southern India.

Since the early 1980s parts of the Tashi Lhunpo monastery have been open to the public and it is an important tourist attraction in Tibet today.

One of its branch monasteries was the famous Drongtse Monastery, 14 km north of Tsechen.[9]