Ṭhānissaro Bhikkhu, also known as Ajaan Geoff (born 1949), is an American Buddhist monk. Belonging to the Thai Forest Tradition, for 22 years he studied under the forest master Ajahn Fuang Jotiko (himself a student of Ajaan Lee). Since 1993 he has served as abbot of the Metta Forest Monastery in San Diego County, California — the first monastery in the Thai Forest Tradition in the US — which he cofounded with Ajahn Suwat Suvaco.[1]

Ṭhānissaro Bhikkhu is perhaps best known for his translations of the Dhammapada and the Sutta Pitaka - almost 1000 suttas in all - providing the majority of the sutta translations for the reference website Access to Insight,[2] as well as for his translations from the dhamma talks of the Thai forest ajahns. He has also authored several dhamma-related works of his own, and has compiled study-guides of his Pali translations.[3]

Ṭhānissaro Bhikkhu was born Geoffrey DeGraff in 1949 and was introduced to the Buddha's teaching on the Four Noble Truths as a high schooler, during a plane ride from the Philippines.[3] Tricycle writes: "he grew up 'a very serious, independent little kid", spending his early childhood on a potato farm on Long Island, New York, and later living in the suburbs of Washington, D.C.[4]

At Oberlin College in the early 1970s, "he eschewed campus political activism because 'I didn't feel comfortable following a crowd.' For him, the defining issue of the day wasn't Vietnam, but a friend's attempted suicide."[4] Thanissaro took a religious studies class when he found out there was meditation involved. Thanissaro writes: "I saw it as a skill I could master, whereas Christianity only had prayer, which was pretty hit-or-miss."[4]

After graduating in 1971 with a degree in European Intellectual History from Oberlin College,[citation needed] he traveled on a university fellowship to Thailand.[citation needed] After a two-year search Thanissaro found a forest teacher — Ajaan Fuang Jotiko, a Kammatthana monk who studied under Ajahn Lee Dhammadaro — who insisted that his scholarly American student put his books aside.[citation needed]

After a brief stay with the teacher was cut short by malaria, he returned to the U.S. to weigh the merits of academia and monasticism.[citation needed]

Thanissaro states that when he returned to Thailand he originally planned on becoming a monk tentatively for five years. When he said that he wanted to be ordained, Ajahn Fuang made him promise to either "succeed in the meditation or die in Thailand. There was to be no equivocating."[1] Thanissaro felt certain upon hearing this.

By Thanissaro's third year ordained as a monk, he became Ajahn Fuang's attendant. Ajahn Fuang's case of psoriasis deteriorated. It reached a point where Taan Geoff had to be at his side constantly.

Thanissaro writes: "When I talked with Ajahn Fuang about going back to the West, about taking the tradition to America, he was very explicit. 'This will probably be your life's work,' he said. He felt, as many teachers have, that the forest tradition would die out in Thailand but would then take root in the West."[1]

Before Ajaan Fuang's death in 1986, he expressed his wish for Ajaan Geoff to become abbot of Wat Dhammasathit. Thanissaro says that in spite of Ajahn Fuang's wish there were a lot of people maneuvering to become abbot.[citation needed] After Ajahn Fuang died, Wat Dhammasathit had already come far from the outlying forest hermitage that Taan Geoff had once arrived at. Thanissaro said: "Ajahn Fuang said to keep moving; this is not a tradition that works well in big groups." Taan Geoff declined the offer of abbot of Wat Dhammasathit, which came with strings attached, and no authority since he was a Westerner in a monastery founded by and for Thai monks.

Instead of taking that position, he travelled to San Diego County in 1991, upon request of Ajaan Suwat Suvaco, where he helped start Metta Forest Monastery.[3] He became abbot of the monastery in 1993.[5] In 1995, Ajaan Geoff became the first American-born, non-Thai bhikkhu to be given the title, authority, and responsibility of Preceptor (Upajjhaya) in the Dhammayut Order. He also serves as Treasurer of that order in the United States. 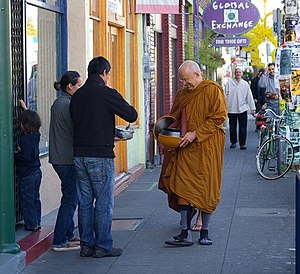 Thanissaro rejects the practice of kasina (meditation on coloured disks) outlined in the Visuddhimagga, and warns against forms of "deep jhana" practiced by contemporary meditation teachers who draw from the commentaries.

Thanissaro calls these meditations "wrong concentration", and says that they have no basis in the Pali Canon, which he argues should be considered ultimately authoritative.[6][7]

Thanissaro talks about the importance of the forest to give rise to the qualities of mind necessary to succeed in Buddhist practice. In his article "The Customs of the Noble Ones" he put it like this: [8]

Throughout its history, Buddhism has worked as a civilizing force. Its teachings on karma, for instance — the principle that all intentional actions have consequences — have taught morality and compassion to many societies. But on a deeper level, Buddhism has always straddled the line between civilization and wilderness. The Buddha himself gained Awakening in a forest, gave his first sermon in a forest, and passed away in a forest. The qualities of mind he needed in order to survive physically and mentally as he went, unarmed, into the wilds, were key to his discovery of the Dhamma. They included resilience, resolve, and alertness; self-honesty and circumspection; steadfastness in the face of loneliness; courage and ingenuity in the face of external dangers; compassion and respect for the other inhabitants of the forest. These qualities formed the "home culture" of the Dhamma.

Periodically, as Buddhism spread and adapted to different societies, some practitioners felt that the original message of the Dhamma had become diluted. So they returned to the wilderness in order to revive its home culture. Many wilderness traditions are still alive today, especially in the Theravada countries of Sri Lanka and Southeast Asia. There, mendicant ascetic monks continue to wander through the remaining rainforests, in search of Awakening in the same environment where the Buddha found Awakening himself. Among these wilderness traditions, the one that has attracted the largest number of Western students, and is beginning to take root in the West, is the Kammatthana (Meditation) Forest tradition of Thailand.

Like Thoreau, Thanissaro Bhikkhu has founded a kind of Walden as the Abbot of the Metta Forest Monastery near San Diego, the first Thai forest tradition monastery in this country. Just as the utopian movement in America was sparked by the advent of the industrial revolution, the forest tradition of Theravada Buddhism was developed in Thailand around the turn of the century by Ajahn Mun Bhuridatto in reaction to the increasing urbanization of the Buddhist monastic communities there. Forest monks abandoned the heavy social demands of the city and devoted themselves to meditation instead.[1]

Aside from Buddhist Religions, all of the books and articles mentioned above are available for free distribution; many are online. Audio recordings of Dhamma talks are also given freely.