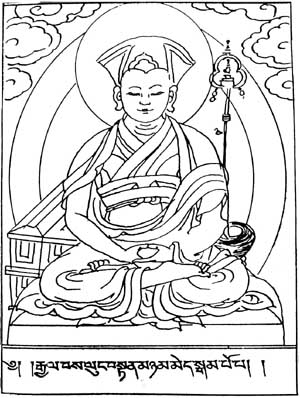 The Jewel Ornament of Liberation (Tib. དྭགས་པོ་ཐར་རྒྱན་, Dakpo Targyen; or Tib. དམ་ཆོས་ཡིད་བཞིན་གྱི་ནོར་བུ་ཐར་པ་རིན་པོ་ཆེའི་རྒྱན་, Wyl. dwags po thar rgyan, or dam chos yid bzhin nor bu rin po che'i rgyan), or Ornament of Precious Liberation is a key text in the Kagyu tradition of Tibetan Buddhism that is said to capture the essence of both the Kadampa and Kagyüpa lineages of Mahayana teachings. The text was written by Gampopa, the foremost disciple of Milarepa.

Ornament of Precious Liberation is the main textbook for the study of Mahayana Buddhism in the Kagyü monastic schools and colleges. It is seen as a meditator’s textbook, inasmuch as it is not an eloquent, scholarly masterpiece or an elaborate discussion but a need-to-know manual of essentials for a meditator. The language is down to earth and direct. The eminent twentieth-century Tibetan scholar Kyapjé Kalu Rinpoché, recognized as an authority by lamas of all Tibetan schools, presented this text as an enlightened being’s (i.e., Gampopa’s) overview of the vast scriptures of nontantric Buddhism and commented, “Even if you want to spend the rest of your life meditating in a cave, you must know Gampopa’s Ornament of Precious Liberation by heart and you must understand Maitreya’s buddha-nature teachings.” In this work, Gampopa carefully picks out the most salient points on each topic and, more importantly, provides students with an overall Dharma framework of topics into which subsequent studies can easily be slotted. Gampopa is always careful to back up his statements or summaries with quotations from the two main Indian Mahayana lineages. Although this is a textbook for Vajrayana meditators, the work remains exclusively a Mahayana treatise except for one or two minor references to his guru Milarepa and to the practice of Mahāmudrā.[1]

The text is structured around the following points: