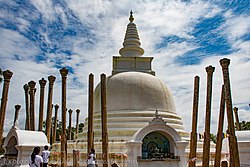 The Thuparamay Stupa in Sri Lanka, dating back to the reign of King Devanampiya Tissa (247–207 BCE).

Theravāda refers to the form of Buddhism practiced in Sri Lanka and the Southeast Asia nations of Burma, Thailand, Cambodia, and Laos. While there are a variety of practices and traditions that are subsumed under the name Theravāda, all of these traditions share the same set of core texts and the same monastic lineage, both of which are inherited from the tradition of the "Great Monastery" (Mahāvihāra), of ancient Sri Lankan capital of Anurādhapura.[1]

The monastic lineage of the Theravada also traces its roots back to the "Great Monastery" (Mahāvihāra) in Sri Lanka. According to tradition, this lineage was brought to Sri Lanka by the son and daughter of King Ashoka around 250 BCE.

Formation of the textual tradition

According to widely-accepted tradition, shortly after the Buddha's death (ca. 480 BCE), five hundred of the most senior monks in India convened to recite and verify all the sermons they had heard during the Buddha's forty-five year teaching career. These teachings were passed down orally for several hundred years, in keeping with an oral tradition of India that predated the Buddha.[4]

In 250 BCE, the Indian Emperor Ashoka sent his son Mahinda to Sri Lanka, to spread the word of the Buddha. Mahinda and his group of fellow monks brought the Buddha's teachings with them in their memories, and transmitted this oral tradition to a group Sri Lankans, who were also ordained as the first monks of Sri Lanka.

As was the custom in India at the time, the orally transmitted teachings, representing the "word of the buddha" (buddhavacana), were divided into three categories, called pitakas (literally "baskets") in Pali. Mahinda also transmitted some commentaries that explained the texts the three pitakas.

"These [teachings] continued to be orally transmitted until around 20 BCE, when invasion and famine" threatened the lives of the monks who retained the transmitted teachings in their memories.[5] Due to this concern, a council was convened where it was decided to put the transmitted teachings into writing. The three pitakas, representing the word of the buddha, were written down in the Pali language, and the commentaries were written in the local Sinhala dialect.[5]

In the third century BCE, Sri Lankan monks began compiling a series of exhaustive commentaries to the Tipitaka.[4]

In the fifth century, the Indian monk Buddhaghosa heard that extensive commentaries on the scriptures had been written in Sri Lanka, and he visited the "Great Monastery" in Anurādhapura.[5] "He was allowed to translate these [Sri Lankan commentaries] into Pali, edit them and add certain thoughts of his own. To prove his suitability for this task, he first composed the Visuddhimagga, or ‘Path of Purification’, a masterly survey of meditation and doctrine which became the classic expression of Theravda Buddhism (Berkwitz, 2010: 113–17)."[5]

The initial formative phase of Theravāda Buddhism was completed by 1000 CE. This is not to say that there are no subsequent developments or changes, but that Theravāda Buddhism largely defines itself by reference to traditions and teachings that were established between the fifth and tenth centuries in Sri Lanka; the twelfth and thirteenth centuries should also be seen as a significant creative period.

"The [three pitakas] plus the post-canonical texts (commentaries, chronicles, etc.) together constitute the complete body of classical Theravada literature."[4]

Formation of the monastic lineage

According to tradition, the sangha of monks began in 250 BCE, when the Indian Emperor Ashoka sent his son Mahinda to Sri Lanka. Mahinda and his fellow India monks ordained the first monks in Sri Lanka and thus initiated the first Sangha of monks at the Anurādhapura Mahāvihāra.

Over time, this monastic lineage was transmitted to Burma, Thailand, Laos, and Cambodia. The monastics in all of these countries follow the monastic code of the Vinaya Pitaka of the Pali Canon.