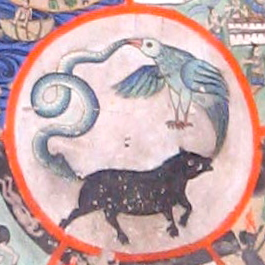 The three poisons are represented in the center of the wheel of life as a pig, a bird, and a snake.

In the Buddhist teachings, the three poisons (of ignorance, attachment, and aversion) are the primary causes that keep sentient beings trapped in samsara. As shown in the wheel of life (bhavacakra), the three poisons lead to the creation of karma, which leads to rebirth in the six realms of samsara. Of these three, ignorance is the root poison. From ignorance, attachment and aversion arise.[1][2][3][4]

[It is] ignorance that drives the entire process... [Ignorance] isn't just an inability to apprehend the truth but an active misapprehension of the status of oneself and all other objects—one's own mind or body, other people, and so forth. It is the conception or assumption that phenomena exist in a far more concrete way than they actually do.

Based on this misapprehension of the status of persons and things, we are drawn into afflictive desire and hatred [i.e. attachment and aversion]... Not knowing the real nature of phenomena, we are driven to generate desire for what we like and hatred for what we do not like and for what blocks our desires. These three—ignorance, desire, and hatred—are called the three poisons; they pervert our mental outlook.[5]

In the Buddhist sense, ignorance is equivalent to the identification of a self as being separate from everything else. It consists of the belief that there is an "I" that is not part of anything else. On this basis we think, "I am one and unique. Everything else is not me. It is something different."...

From this identification stems the dualistic view, since once there is an "I," there are also "others." Up to here is "me." The rest is "they." As soon as this split is made, it creates two opposite ways of reaction: "This is nice, I want it!" and "This is not nice, I do not want it!" ...

On the one hand there are those things that seem to threaten or undermine us. Maybe they will harm us or take away our identity. They are a danger to our security. Due to this way of thinking, aversion comes up... Then on the other hand there are those things that are so nice. We think, "I want them. I want them so much..." Through this way of thinking...attachment arises.[6]

The three kleshas of ignorance, attachment and aversion are referred to as the three poisons (Skt. triviṣa; Tibetan: dug gsum) in the Sanskrit tradition and as the three unwholesome roots (Pāli, akusala-mūla; Skt. akuśala-mūla ) in the Pali tradition.

The Sanskrit, Pali, and Tibetan terms for each of the three poisons are as follows:

Note that in the Sanskrit tradition moha is identified as a subcategory of avidya. Whereas avidya is defined as a fundamental ignorance, moha is defined as an ignorance of cause and effect or of reality that accompanies only destructive states of mind or behavior.[13] Moha is sometimes replaced by avidya in lists of the three poisons. In contemporary explanations of the three poisons, teachers are likely to emphasize the fundamental ignorance of avidya rather than moha.

Relation to other kleshas

These three poisons are said to be the root of all of the other kleshas.[15][16]

The conditioning factors [kleshas] are often referred to in Buddhist terms as “mental afflictions,” or sometimes “poisons.” Although the texts of Buddhist psychology examine a wide range of conditioning factors, all of them agree in identifying three primary afflictions that form the basis of all other factors that inhibit our ability to see things as they really are: ignorance, attachment, and aversion.[17]

In the Buddhist traditions, it is believed that the three poisons are the cause of both physical and mental illness. Geshe Tashi Tsering states:

According to Buddhism, even physical health is linked to mental states. Thus the real threats to our well-being are attachment, anger, and ignorance—the three fundamental deluded minds that lead to all other afflictions, both mental and physical. Only with thorough understanding of the mind and its functions can we hope to transcend the disturbing thoughts and emotions that plague us.[18]

Ancient tradition believes that the three root poisons are not only the causes of all suffering but also the causes of disease as well.[19]

In Tibetan medicine, it is believed that the three poisons obscure the flow of the energetic wind (Tib. lung) through three main subtle energy channels within the body.[19]

The three poisons have been compared to the Western psychological concepts of narcissism, desire, and anger.

The first wave of psychoanalysis, the classical period of Freud and his followers that extended into the 1950s, was primarily concerned with uncovering repressed desire and anger, or Eros and Thanatos, the life and death instincts, which in some way correspond to the Buddhist [concepts of attachment and aversion]. The next wave, of object relations and narcissism that has dominated the past thirty years, exposed the gap within: the emptiness, inauthenticity, or alienation that results from estrangement from our true selves and our confusion or ignorance about our own true natures. In the Buddhist view, this is the black hog of delusion [i.e. ignorance], the root or precondition of greed and hatred.[20]

Within the "wheel of life"

The three poisons are represented in the hub of the wheel of life as a pig, a bird, and a snake (representing ignorance, attachment, and aversion, respectively).

Tibetans have a traditional painting called the Wheel of Life, which depicts the samsaric cycle of existence. In the centre of this wheel are three animals: a pig, a snake, and a bird. They represent the three poisons. The pig stands for ignorance, although a pig is not necessarily more stupid than other animals. The comparison is based on the Indian concept of a pig being the most foolish of animals, since it always sleeps in the dirtiest places and eats whatever comes to its mouth. Similarly, the snake is identified with anger because it will be aroused and leap up at the slightest touch. The bird represents desire and clinging. In Western publications it is frequently referred to as a cock, but this is not exactly accurate. This particular bird does not exist in Western countries, as far as I know. It is used as a symbol because it is very attached to its partner. These three animals represent the three main mental poisons, which are the core of the Wheel of Life. Stirred by these, the whole cycle of existence evolves. Without them, there is no samsara.[3]

The three wholesome mental factors that are identified as the opposites of the three poisons are:[22]

The principal aim of the Buddhist path is to cultivate these and related positive qualities.[22]