The Tibetan alphasyllabary is the writing system used to write the Tibetic languages such as Tibetan, Dzongkha (Bhutan), and so on.

An alphasyllabary, or abugida, is a segmental writing system in which consonant–vowel sequences are written as a unit: each unit is based on a consonant letter, and vowel notation is secondary. This contrasts with a full alphabet, in which vowels have status equal to consonants.

Alphasyllabaries are the writing systems of the Indian subcontent and much of Southeast Asia, in addition to Tibet and the Himalayas. The Tibetan system is derived from the Indic languages such as Sanskrit.

There are two scripts used to write the Tibetan alphasyllabary:

The Tibetan alphasyllabary has thirty consonants. Each consonant has an inherent /a/ vowel sound. The Tibetan symbol for /a/ is ཨ.

The consonants are shown in the following table:

There are five vowels in the alphasyllabary:

The vowel /a/ is implicit in each consonant; the other vowels are indicated by the appropriate vowel sign. For example:

The unique aspect of the Tibetan script is that the consonants can be written either as radicals, or they can be written in other forms, such as subscript and superscript forming consonant clusters.

To understand how this works, one can look at the radical ཀ /ka/ and see what happens when it becomes ཀྲ /kra/ or རྐ /rka/. In both cases, the symbol for ཀ /ka/ is used, but when the ར /ra/ is in the middle of the consonant and vowel, it is added as a subscript. On the other hand, when the ར /ra/ comes before the consonant and vowel, it is added as a superscript.[2] ར /ra/ actually changes form when it is above most other consonants; thus རྐ rka. However, an exception to this is the cluster རྙ /rɲa/. Similarly, the consonants ཝ /wa/, ར /ra/, and ཡ /ja/ change form when they are beneath other consonants; thus ཀྭ /kwa/; ཀྲ /kra/; ཀྱ /kja/.

The superscript position above a radical is reserved for the consonants ར /ra/, ལ /la/, and ས /sa/. 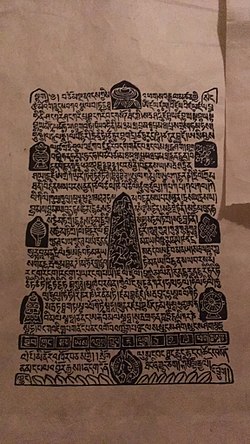 A text in Tibetan script suspected to be Sanskrit in content. From the personal artifact collection of Donald Weir.

The Tibetan alphabet, when used to write other languages such as Balti and Sanskrit, often has additional and/or modified graphemes taken from the basic Tibetan alphabet to represent different sounds.

Balti is a Tibetic language spoken in the Baltistan region of Pakistan.

Below is a table with Tibetan letters and different Romanization and transliteration system for each letter, listed below systems are: Wylie transliteration (W), Tibetan pinyin (TP), Dzongkha phonetic (DP), ALA-LC Romanization (A)[4] and THL Simplified Phonetic Transcription (THL).

The first version of Microsoft Windows to support the Tibetan keyboard layout is MS Windows Vista. The layout has been available in Linux since September 2007. In Ubuntu 12.04, one can install Tibetan language support through Dash / Language Support / Install/Remove Languages, the input method can be turned on from Dash / Keyboard Layout, adding Tibetan keyboard layout. The layout applies the similar layout as in Microsoft Windows.

The Dzongkha keyboard layout scheme is designed as a simple means for inputting Dzongkha text on computers. This keyboard layout was standardized by the Dzongkha Development Commission (DDC) and the Department of Information Technology (DIT) of the Royal Government of Bhutan in 2000.

It was updated in 2009 to accommodate additional characters added to the Unicode & ISO 10646 standards since the initial version. Since the arrangement of keys essentially follows the usual order of the Dzongkha and Tibetan alphabet, the layout can be quickly learned by anyone familiar with this alphabet. Subjoined (combining) consonants are entered using the Shift key.

The Dzongkha (dz) keyboard layout is included in Microsoft Windows, Android, and most distributions of Linux as part of XFree86.

Tibetan was originally one of the scripts in the first version of the Unicode Standard in 1991, in the Unicode block U+1000–U+104F. However, in 1993, in version 1.1, it was removed (the code points it took up would later be used for the Burmese script in version 3.0). The Tibetan script was re-added in July, 1996 with the release of version 2.0.

The Unicode block for Tibetan is U+0F00–U+0FFF. It includes letters, digits and various punctuation marks and special symbols used in religious texts: