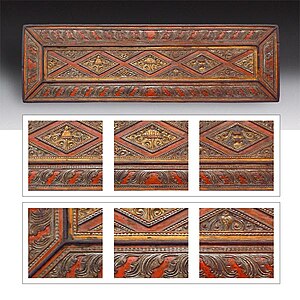 15/16th century carved manuscript cover. An excellent example of the Tibetan carvers art with simple designs containing sacred elements. Sculpted and lacquered, this manuscript cover has stupas and canopies within geometric designs. Primary to this woodcarvings rich appointment of iconography, are the auspicious symbols (ashtamangala) including: the "Precious Umbrella" that symbolizes the wholesome activity of preserving beings from harmful forces; the "Victory Banner" that celebrates the activities of one's own and others' body and mind over obstacles, as well as the "Vase of Treasure" holding and endless reign of wealth and prosperity.

For more than a thousand years, Tibetan artists have played a key role in the cultural life of Tibet. From designs for painted furniture to elaborate murals in religious buildings, their efforts have permeated virtually every facet of life on the Tibetan plateau. The vast majority of surviving artworks created before the mid-20th century are dedicated to the depiction of religious subjects, with the main forms being thangka, distemper paintings on cloth, Tibetan Buddhist wall paintings, and small statues in bronze, or large ones in clay, stucco or wood. They were commissioned by religious establishments or by pious individuals for use within the practice of Tibetan Buddhism and were manufactured in large workshops by monks and lay artists, who are mostly unknown.

The art of Tibet may be studied in terms of influences which have contributed to it over the centuries, from other Chinese, Nepalese, Indian, and sacred styles.

Many bronzes in Tibet that suggest Pala influence, are thought to have been either crafted by Indian sculptors or brought from India.[1] 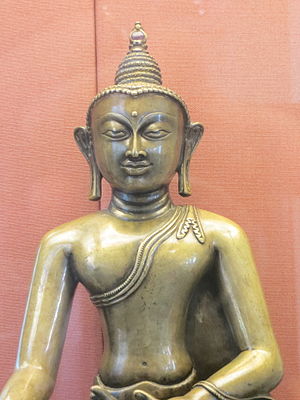 As Mahayana Buddhism emerged as a separate school in the 4th century AD, it emphasized the role of bodhisattvas, compassionate beings who forgo their personal escape to nirvana in order to assist others. From an early time, various bodhisattvas were also subjects of statuary art. Tibetan Buddhism, as an offspring of Mahayana Buddhism, inherited this tradition. But the additional dominating presence of the Vajrayana (or Buddhist tantra) may have had an overriding importance in the artistic culture. A common bodhisattva depicted in Tibetan art is the deity Chenrezig (Avalokitesvara), often portrayed as a thousand-armed saint with an eye in the middle of each hand, representing the all-seeing compassionate one who hears our requests. This deity can also be understood as a yidam, or 'meditation Buddha' for Vajrayana practice. 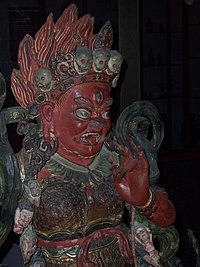 More specifically, Tibetan Buddhism contains Tantric Buddhism, also known as Vajrayana Buddhism for its common symbolism of the vajra, the diamond thunderbolt (known in Tibetan as the dorje). Most of the typical Tibetan Buddhist art can be seen as part of the practice of tantra. Vajrayana techniques incorporate many visualizations during meditation, and most of the elaborate tantric art can be seen as aids to these visualizations; from representations of meditational deities (yidams) to mandalas and all kinds of ritual implements.

A surprising aspect of Tantric Buddhism is the common representation of wrathful deities, often depicted with angry faces, circles of flame, or with the skulls of the dead. These images represent the Protectors (Skt. dharmapala) and their fearsome bearing belies their true compassionate nature. Actually their wrath represents their dedication to the protection of the dharma teaching as well as to the protection of the specific tantric practices to prevent corruption or disruption of the practice. They are most importantly used as wrathful psychological aspects that can be used to conquer the negative attitudes of the practitioner.

The indigenous shamanistic religion of the Himalayas is known as Bön. Bon contributes a pantheon of local tutelary deities to Tibetan art. In Tibetan temples (known as lhakhang), statues of the Buddha or Padmasambhava are often paired with statues of the tutelary deity of the district who often appears angry or dark. These gods once inflicted harm and sickness on the local citizens but after the arrival of Padmasambhava these negative forces have been subdued and now must serve Buddha. 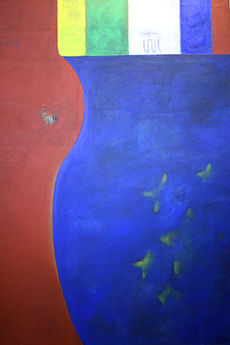