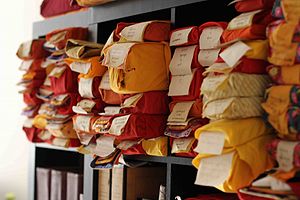 The Kangyur contains sutras and tantras, which are considered "the word of the Buddha" in the Tibetan tradition.

Generally, the main categories of the Kangyur are:[3][4] 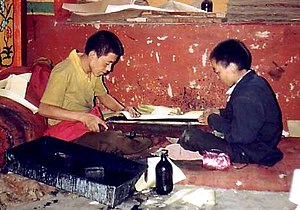 The Tengyur contains works written by Indian Buddhist masters that explain and elaborate on the words of the Buddha.

Generally, the main categories of the Tengyur are:[3]

The following websites contain online libraries of the complete texts of the Kangyur and Tengyur (the Tibetan Canon):

Most of the texts of the Kangyur and Tengyur (the Tibetan Canon) have not been translated into English. A large-scale effort is currenlty underway by the 84000 Translation Group to systematically translate all of the works from this canon. Their website contains a list of all the sections and titles from the canon, their current translation status, and the translated texts where available.

The Lotsawa House website contains translations of (mostly smaller) texts into English and other languages (available for free download):

Other important collections of texts that are not included in the Tibetan Kangyur or Tengyur are: