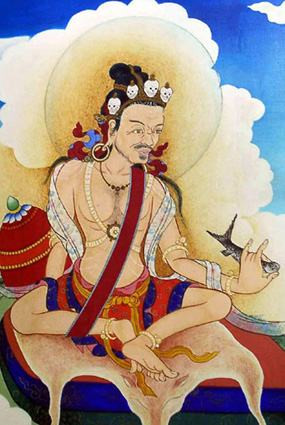 Tilopa (Prakrit; Sanskrit: Talika or Tilopada) (988–1069) was a tantric practitioner and mahasiddha. He practiced Anuttarayoga Tantra, a set of spiritual practices intended to accelerate the process of attaining Buddhahood. Naropa is considered his main student. At Pashupatinath temple premise in Kathmandu, there are two caves where Tilopa attained Siddhi and initiated his disciple Naropa.

He was born in either Chativavo (Chittagong) or Jagora in Bengal.

Tilopa was born into the priestly caste[1] – but he adopted the monastic life upon receiving orders from a dakini (female buddha whose activity is to inspire practitioners) who told him to adopt a mendicant and itinerant existence. From the beginning, she made it clear to Tilopa that his real parents were not the persons who had raised him, but instead were primordial wisdom and universal voidness. Advised by the dakini, Tilopa gradually took up a monk's life, taking the monastic vows and becoming an erudite scholar. The frequent visits of his dakini teacher continued to guide his spiritual path and close the gap to enlightenment.[2]

He began to travel throughout India, receiving teachings from many gurus:

As advised by Matangi, Tilopa started to work at a brothel in Bengal for a prostitute called Dharima as her solicitor and bouncer. During the day, he was grinding sesame seeds for his living.[3] During a meditation, he received a vision of Vajradhara and, according to legend, the entirety of mahamudra was directly transmitted to Tilopa. After having received the transmission, Tilopa embarked on a wandering existence and started to teach. He appointed Naropa, his most important student, as his successor.[2] 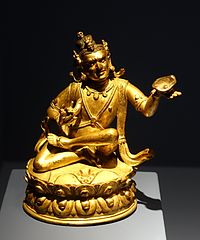 Six Precepts or Words of Advice

Tilopa gave Naropa a teaching called the Six Words of Advice, the original Sanskrit or Bengali of which is not extant; the text has reached us in Tibetan translation. In Tibetan, the teaching is called gnad kyi gzer drug[4] – literally, "six nails of key points" – the aptness of which title becomes clear if one considers the meaning of the English idiomatic expression, "to hit the nail on the head.”

According to Ken McLeod, the text contains exactly six words; the two English translations given in the following table are both attributed to him.

An earlier translation circa 1957 by Alan Watts and Dr. Alex Wayman rendered Tilopa's "Six Precepts" as

No thought, no reflection, no analysis,
No cultivation, no intention;
Let it settle itself.

In a footnote, Watts cited a Tibetan source text at partial variance with McLeod's in sequence and syntax, namely:

Based on an "elucidation" provided by Wayman, Watts explained that

Mi-mno is approximately equivalent to the Zen terms wu-hsin or wu-nien, “no-mind” or “no thought.” Bsam is the equivalent of the Sanskrit cintana, i.e., discursive thinking about what has been heard, and dpyad of mimamsa, or “philosophical analysis.” Bsgom is probably bhavana or the Chinese hsiu, “to cultivate,” “to practice,” or “intense concentration.” Sems is cetana or szu, with the sense of intention or volition. Rang-babs-bzhag is literally “self-settle-establish,” and “self-settle” would seem to be an almost exact equivalent of the Taoist tzu-jan, “self-so,” “spontaneous,” or “natural.”[5]

Watts had studied Chinese, and Wayman was a Tibetologist and professor of Sanskrit associated with UCLA and later Columbia University.

Tilopa also gave mahamudra instruction to Naropa by means of the song known as "The Ganges Mahamudra,"[6] one stanza of which reads:

The fool in his ignorance, disdaining Mahamudra,
Knows nothing but struggle in the flood of samsara.
Have compassion for those who suffer constant anxiety!
Sick of unrelenting pain and desiring release, adhere to a master,
For when his blessing touches your heart, the mind is liberated.[7]

One of the most famous and important statements attributed to Tilopa is: “The problem is not enjoyment; the problem is attachment.”[citation needed]