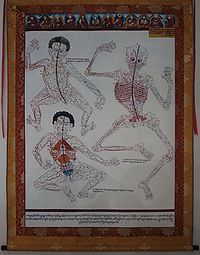 The Tibetan medical system incorporates elements of Indian Buddhist literature (for example Abhidharma and Vajrayana tantras) and Ayurveda.[1] It continues to be practiced in Tibet, India, Nepal, Bhutan, Ladakh, Siberia, China and Mongolia, as well as more recently in parts of Europe and North America. It embraces the traditional Buddhist belief that all illness ultimately results from the three poisons: ignorance, attachment and aversion. Tibetan medicine follows the Buddha's Four Noble Truths which apply medical diagnostic logic to suffering.[2][3]

As Indian culture flooded Tibet in the eleventh and twelfth centuries, a number of Indian medical texts were also transmitted.[4] For example, the Ayurvedic Astāngahrdayasamhitā (Heart of Medicine Compendium attributed to Vagbhata) was translated into Tibetan by Rinchen Zangpo (957–1055).[5] Tibet also absorbed the early Indian Abhidharma literature, for example the fifth century Abhidharmakosasabhasyam by Vasubandhu, which expounds upon medical topics, such as fetal development.[6] A wide range of Indian Vajrayana tantras, containing practices based on medical anatomy, were subsequently absorbed into Tibet.[7][8]

Some scholars believe that rgyud bzhi (the Four Tantras) was told by the Lord Buddha, while some believe it is the primary work of Yuthok Yontan Gonpo (708 AD).[9] The former opinion is often refuted by saying "If it was told by the Lord Buddha, rgyud bzhi should have a Sanskrit version". However, there is no such version and also no Indian practitioners who have received unbroken lineage of rgyud bzhi. Thus, the later thought should be scholarly considered authentic and practical. The provenance is uncertain.

Youthog Yontag Gonopo adapted and synthesized the Four Tantras in the 12th Century. The Four Tantras are scholarly debated as having Indian origins or, as Remedy Master Buddha Bhaisajyaguru's word or, as authentically Tibetan with Chinese origins. It was not formally taught in schools at first but, intertwined with Tibetan Buddhism. Around the turn of the 14th century, the Drangti family of physicians established a curriculum for the Four Tantras (and the supplementary literature from the Yutok school) at Sakya Monastery.[10] The 5th Dalai Lama supported Desi Sangye Gyatso to found the pioneering Chagpori College of Medicine in 1696. Chagpori taught Gyamtso's Blue Beryl as well as the Four Tantras in a model that spread throughout Tibet along with the oral tradition.[2]

The Four Tantras (Gyushi, rGyu-bzhi) are native Tibetan texts incorporating Indian, Chinese and Greco-Arab medical systems.[11] The Four Tantras is believed to have been created in the twelfth century and still today is considered the basis of Tibetan medical practise.[12] The Four Tantras is the common name for the text of the Secret Tantra Instruction on the Eight Branches, the Immortality Elixir essence. It considers a single medical doctrine from four perspectives. Sage Vidyajnana expounded their manifestation.[2] The basis of the Four Tantras is to keep the three bodily humors in balance; (wind rlung, bile mkhris pa, phlegm bad kan.)

Some believe the Four Tantra to be the authentic teachings of the Buddha 'Master of remedies' which was translated from sanskrit, others believe it to be solely Tibetan in creation by Yuthog the Elder or Yuthog the Younger. Noting these two theories there remain others sceptical as to its original author.

Although there is clear written instruction in the Four Tantra, the oral transmission of medical knowledge still remained a strong element in Tibetan Medicine, for example oral instruction may have been needed to know how to perform a moxibustion technique.

• rLung[14] is the source of the body's ability to circulate physical substances (e.g. blood), energy (e.g. nervous system impulses), and the non-physical (e.g. thoughts). In embryological development, the mind's expression of materialism is manifested as the system of rLung. There are five distinct subcategories of rLung each with specific locations and functions: Srog-'Dzin rLüng, Gyen-rGyu rLung, Khyab-Byed rLüng, Me-mNyam rLung, Thur-Sel rLüng.

• mKhris-pa[14] is characterized by the quantitative and qualitative characteristics of heat, and is the source of many functions such as thermoregulation, metabolism, liver function and discriminating intellect. In embryological development, the mind's expression of aggression is manifested as the system of mKhris-pa. There are five distinct subcategories of mKhris-pa each with specific locations and functions: 'Ju-Byed mKhris-pa, sGrub-Byed mKhris-pa, mDangs-sGyur mKhris-pa, mThong-Byed mKhris-pa, mDog-Sel mKhris-pa.

• Bad-kan[14] is characterized by the quantitative and qualitative characteristics of cold, and is the source of many functions such as aspects of digestion, the maintenance of our physical structure, joint health and mental stability. In embryological development, the mind's expression of ignorance is manifested as the system of Bad-kan. There are five distinct subcategories of Bad-kan each with specific locations and functions: rTen-Byed Bad-kan, Myag-byed Bad-kan, Myong-Byed Bad-kan, Tsim-Byed Bad-kan, 'Byor-Byed Bad-kan.

A key objective of the government of Tibet is to promote traditional Tibetan medicine among the other ethnic groups in China. Once an esoteric monastic secret, the Tibet University of Traditional Tibetan Medicine and the Qinghai University Medical School now offer courses in the practice. In addition, Tibetologists from Tibet have traveled to European countries such as Spain to lecture on the topic.[15]

The Tibetan government-in-exile has also kept up the practise of Tibetan Medicine in India since 1961 when it re-established the Men-Tsee-Khang (the Tibetan Medical and Astrological Institute). It now has 48 branch clinics in India and Nepal.[16]