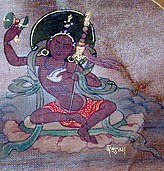 The Kagyu (bka' brgyud བཀའ་བརྒྱུད།) school is one of the four schools of Tibetan Buddhism. The Kagyu lineages trace themselves back to the 11th century Indian Mahasiddhas Tilopa, Naropa, Maitripa and the yogini Niguma, via the Tibetan yogi Marpa Lotsawa (1012–1097), who brought their teachings to Tibet. Marpa's student Milarepa was also an influential poet and teacher.

The Tibetan Kagyu tradition gave rise to a large number of independent sub-schools and lineages. The principal Kagyu lineages existing today as independent schools are those which stem from Milarepa's disciple, Gampopa (1079–1153), a monk who merged the Kagyu lineage with the Kadam tradition.[1] The Kagyu schools which survive as independent institutions are mainly the Karma Kagyu, Drikung Kagyu, Drukpa Lineage and the Taklung Kagyu.[2] The Karma Kagyu school is the largest of the sub-schools, and is headed by the Karmapa. Other lineages of Kagyu teachings, such as the Shangpa Kagyu, are preserved in other schools.

The main teachings of the Kagyus include Mahamudra and the six dharmas of Naropa.

The "six dharmas of Naropa" were developed by Naropa based on the teachings of his teacher Tilopa. These "six dharmas" are: inner heat (tummo), illusory body, dream, luminosity, phowa and bardo. These vajrayana methods, along with the profound meditation practices of Mahamudra, form the core of the Kagyü teachings.

Three particularly important texts, often referred to collectively as nang brtag rgyud gsum, are: The Profound Inner Meaning, the Two Sections of the Hevajra Root Tantra, and the Sublime Continuum.[3]