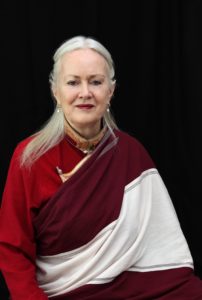 Lama Tsultrim Allione is a teacher, writer and translator in the Tibetan Buddhist tradition. She is the author of Women of Wisdom (1984), Feeding Your Demons (2008), and Wisdom Rising (2018).

"Lama Tsultrim is the founder of Tara Mandala, a 700-acre retreat center with the three-story temple and library dedicated to the divine feminine in the Buddhist tradition near Pagosa Springs, in southwest Colorado... Born in New England, she traveled to Asia in her late teens and in 1970 at the age of 22 in Bodhgaya, India she became the first American to be ordained as a Tibetan Buddhist nun. She later disrobed, married and became the mother of three and now is grandmother of six. In 2007 she was recognized in Tibet and Nepal as the reincarnation of a renowned 11th-century Tibetan yogini, Machig Labdrön... She was awarded international recognition as an “Outstanding Woman in Buddhism” in 2009 by a panel of distinguished scholars and practitioners in Bangkok, Thailand."[1]