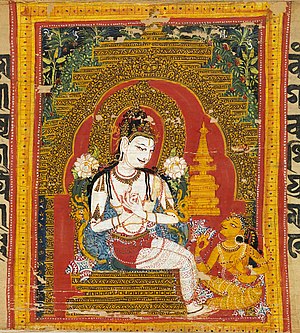 Tushita or Tusita (meaning "realm, contentment")[1] is the fourth of the six heavens of the desire realm. Like the other heavens (deva realms), Tusita is said to be reachable through sādhanā, or advanced meditative attainments. It is the heaven where the Bodhisattva Svetaketu (Pali: Setaketu; "White Banner") resided before being reborn on Earth as Gautama Buddha, the historical Buddha;[2] it is the place where bodhisattvas, or future Buddhas reside before their rebirth as a Buddha.[1]

Like all heavenly realms in Buddhism, the Tusita Heaven is the residence of divine beings or devas. According to the Visakhuposatha Sutta of the Pāli Canon,[3] time there runs very differently than on Earth:

According to the Dana Sutta, those who do meritorious deeds with the intention of helping others would tend to be reborn in Tusita Heaven upon death.[4]

Each of these bodhisattvas, following the virtues of the Mahasattva Samantabhadra, is endowed with the immeasurable practices and vows of the Bodhisattva Path, and firmly dwells in all the meritorious deeds. He freely travels in all the ten quarters and employs skillful means of emancipation. He enters the treasury of the Dharma of the Buddhas, and reaches the Other Shore. Throughout the innumerable worlds he attains Enlightenment. First, dwelling in the Tusita Heaven, he proclaims the true Dharma. Having left the heavenly palace, he descends into his mother's womb.

Because Tusita Heaven is where all Bodhisattvas destined to reach full enlightenment in their next life dwell, Tuṣita heaven is therefore closely associated with Maitreya, the next Buddha. Many Buddhists vow to be reborn there so that they can hear the teachings of Maitreya and ultimately be reborn with him when he becomes a Buddha. Other bodhisattvas also dwell in this heavenly realm from time to time.