From Encyclopedia of Buddhism
Jump to navigation Jump to search
This article is about the Tibetan translator. For the primordial Buddha Vairocana, see Vairocana. 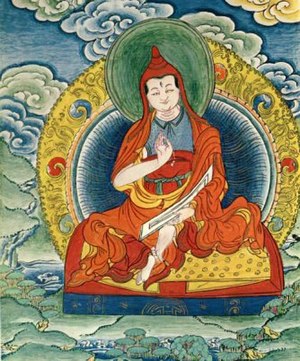 Within the Nyingma school, he is identified as one of the three main masters to bring the Dzogchen teachings to Tibet, together with Padmasambhava and Vimalamitra.

Vairotsana was born into the Pagor (Tib. སྤ་གོར་, Wyl. spa gor) clan, and was sent to India by Trisong Detsen to study with Indian panditas. He also travelled widely in China, Khotan, Nepal, Shangshung and elsewhere. He was one of the original seven monks ordained by Shantarakshita.

His principal teacher was Shri Singha, from whom he received the instructions and empowerments of sem dé, long dé and mengak dé. He also received direct transmissions from Mañjushrimitra, who appeared to him in his wisdom body[1]. In realization, Vairotsana became equal to Guru Rinpoche.

After returning to Tibet, he was eventually sent into exile in East Tibet; there he taught Yudra Nyingpo, Sangtön Yeshe Lama, and the old man, Mipham Gönpo before Trisong Detsen recalled him to Lhasa.

He translated many of Shri Singha’s works as well as many other mantrayana texts. He also translated part of the 100,000 verse Prajnaparamita text and other sutras. The exact number of his translations cannot now be traced, as the names of early translators were not always recorded by later translators.