From Encyclopedia of Buddhism
Jump to navigation Jump to search
For other uses of Vajrasana, see Vajrasana.

The Vajrasana partially decorated, at the foot of the Bodhi tree. The Ashokan friezes are visible on the sides of the throne.

The Vajrasana (IAST: vajrāsana; diamond throne) is a throne in the Mahabodhi Temple at Bodh Gaya. It is thought to have been built by Emperor Ashoka of the Maurya Empire between 250-233 BCE, at the location where Buddha Shakyamuni reached enlightenment.[1]

The vajrasana is the bodhimanda (bodhimaṇḍa; seat or platform of enlightenment) of Gautama Buddha as it is the only site on earth capable of withstanding the forces unleashed during the battle for enlightenment.[2] Being the site where Gautama Buddha achieved liberation, Tibetan texts also use the term vajrasana to refer to Bodh Gaya itself.[3]

The "Diamond Throne" or Vajrasana of Bodh Gaya.

Anagarika Dharmapala (1864-1933) at the Vajrasana. The throne appears clearly in its exact shape, with supporting columns.

Bharhut relief with the Vajrasana (similar to the Anagarika Dharmapala photograph with its supporting columns), and the Mahabodhi Temple around the Bodhi Tree (2nd century BCE).[4]

The Vajrasana was built by Ashoka in order to mark the place where the Buddha reached enlightenement.[5] Ashoka is thought to have visited Bodh Gaya around 260 BCE, about 10 years into his reign, as explained by his Rock Edict number VIII.[6] He describes his visit to Bodh Gaya, known in ancient times as Sambodhi ("enlightenement") or Vajrasana ("Vajrasana"):[7]

"In the past kings used to go out on pleasure tours during which there was hunting and other entertainment. But ten years after Beloved-of-the-Gods (Ashoka) had been coronated, he went on a tour to Sambodhi and thus instituted Dharma tours. During these tours, the following things took place: visits and gifts to Brahmans and ascetics, visits and gifts of gold to the aged, visits to people in the countryside, instructing them in Dharma, and discussing Dharma with them as is suitable. It is this that delights Beloved-of-the-Gods, King Piyadasi, and is, as it were, another type of revenue."

The throne slab dating from the time of Ashoka, was built when Ashoka established the first Bodh Gaya temple around the Bodhi tree circa 260 BCE.[8] The throne was initially found hidden behind a bigger throne of the Kushan period, and even an even bigger one, probably from the Pala period. It is thought that the Vajrasana was initially located at the bottom of the original Bodhi tree.[8] The slab is made of polished sandstone, and dated to the time of Ashoka.[8] This is the oldest known piece of architecture at Bodh Gaya.[8] 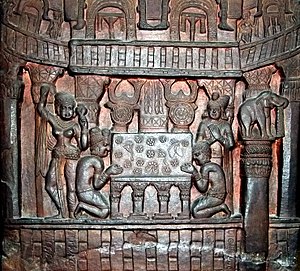 The Vajrasana as illustrated in Bharhut (2nd century BCE).

According to the inscribed Bharhut relief related to the Vajrasana, the original Mahabodhi Temple of Asoka was an open pavilion supported on pillars. In the middle is seen the Vajrasana decorated in front with four flat pilasters. Behind the Throne appears the trunk of the Bodhi Tree, which rises up high above the building, and on each side of the Tree there is a combined symbol of the Triratna and the Dharmachakra, standing on the top of a short pillar. On each side of the Vajrasana room there is a side room of the same style. The top of the Throne is ornamented with flowers, but there is no figure of Buddha.[9]

The relief bears the inscription: "Bhagavato Sakamuni Bodhi" ("The Bodhi (Tree) of the divine Shakyamuni"), thereby confirming the meaning of the relief.[9]

The Vajrasana, together with the remnants of the ancient temple built by Ashoka, was excavated by archaeologist Alexander Cunningham (1814-1893), who published his discovery and related research of the Mahabodhi Temple in his 1892 book Mahâbodhi, or the great Buddhist temple under the Bodhi tree at Buddha-Gaya.