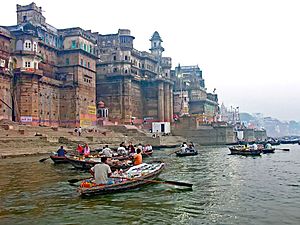 Varanasi (Skt. Vārāṇasī) is a city on the Ganges river in northern India that is an important pilgrimage site in Hinduism and Buddhism.

The Buddha is said to have given his first sermon, the Dhammacakkappavattana Sutta, at nearby Sarnath in 528 BCE.

Varanasi is one of the world's oldest continually inhabited cities. Kashi, its ancient name, was associated with a kingdom of the same name of 2,500 years ago.

The name Varanasi was officially so revived after 1947, but the city is still widely known as Banaras or Benares and since ancient times also as Kashi.