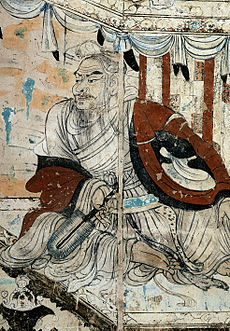 The Vimalakīrti Nirdeśa Sūtra (Sanskrit: विमलकीर्तिनिर्देशसूत्र), (Standard Tibetan: འཕགས་པ་དྲི་མ་མེད་པར་གྲགས་པས་བསྟན་པ་ཞེས་བྱ་བ་མདོ།) or Vimalakīrti Sūtra is a Mahayana Buddhist sutra. Sometimes used in the title, the word nirdeśa means "instruction, advice". The sutra teaches, among other subjects, the meaning of nondualism. It contains a report of a teaching addressed to both arhats and bodhisattvas by the upāsaka (lay practitioner) Vimalakīrti, who expounds the doctrine of śūnyatā to them. This culminates with the wordless teaching of silence.

There are currently various translations circulating, and in the English language, there are mainly four versions being translated. Two of which have been translated from the Chinese version by Kumarajiva, and two others being translated from the Tibetan version in Kanjur Canon. The Chinese version has three versions, of which the Kumarajiva version is the most famous. The Tibetan version has two known versions, one of which is found in Kanjur, and the other being the Dunhuang version found in the early 20th century. There are also various translations into Japanese, Korean, and Mongolian, Manchurian languages. There is also a popular French version circulating by the famous scholar Lamotte.

Translator Burton Watson argues that the Vimalakīrti Nirdeśa Sūtra was likely composed in approximately 100 CE.[1] Although lost for centuries, a version in the original Sanskrit has recently been recovered amongst the Chinese government's Potala collection in Tibet.[2] It was translated into Chinese several times, the first being produced in 188 CE. This translation was made by the Kuṣāṇa monk Lokakṣema, who came to China from the kingdom of Gandhāra. The sūtra was translated six more times at later dates, with two especially influential translations are the Kumārajīva version (406 CE),[3] which is the most widely used, and the Xuanzang version (650 CE). Chos-nyid-tshul-khrims also translated it into Tibetan in the early 8th century.[1] Most Japanese versions are based on the Chinese Kumarajiva version. The Nagarjuna Institute of Exact Methods then made available in 2007 a romanized Sanskrit version of what was named as Āryavimalakīrtinirdeśo Nāma Mahāyānasūtram.[4]

The Vimalakīrti Nirdeśa Sūtra is a typical example of a Buddhavacana,[citation needed] which are works accepted within a tradition as being the teachings of the Buddha though the sūtra makes no claim to being the actual words of the historical Buddha, nor is it preached in a manner entirely by the Buddha.

The sutra features Buddha teaching the Dharma to a vast assembly of ordained saṃgha, celestial bodhisattvas, laity, and various devas and other nonhuman beings in the Amra Gardens in the city of Vaiśālī in northeastern India. Vimalakīrti, a wealthy Buddhist layperson who is considered a paragon of Buddhist virtue, is feigning illness. When the ruler of the region and various officials and others visit him, he takes the opportunity to expound Dharma teachings.

When Śākyamuni Buddha learns of the situation he asks each of his ten major monk disciples to visit Vimalakīrti during his illness, but each in turn declines to do so, each citing a past incident during which he was reproved by Vimalakīrti for some deficiency in his understanding of the Dharma. The same is repeated with various great bodhisattvas, until Mañjuśrī, the bodhisattva of wisdom, finally agrees.

The Vimalakīrti Nirdeśa Sūtra concludes with praises of the sūtra itself, and an "entrustment" scene in which Śākyamuni calls on the bodhisattva Maitreya, who is destined to be the next Buddha to appear in this world, to guard the sūtra and ensure that it is widely propagated.

The Vimalakīrti Nirdeśa Sūtra "offers us two dramatic and contrasting moments of silence. The first of these [is] the silence of Śāriputra", who is rendered silent during an exchange with a goddess:

Śāriputra abandons speech too quickly, after all. He has been asked a question in a particular context [...] to refuse to speak at such a point is neither an indication of wisdom, nor a means of imparting wisdom, but at best a refusal to make progress [...] Śāriputra's failed silence is but a contrastive prelude to Vimalakīrti's far more articulate silence.[5]

Vimalakīrti remains silent while discussing the subject of emptiness with an assembly of bodhisattvas. The bodhisattvas give a variety of answers on the question what non-duality is. Manjusri is the last bodhisattva to answer, and says that "by giving an explanation they have already fallen into dualism". Vimalakirti, in his turn, answers with silence. [6][lower-alpha 1]

With this emphasis on silence the Vimalakīrti Nirdeśa Sūtra served as a forerunner of the approach of the Ch'an/Zen tradition, with its avoidance of positive statements on 'ultimate reality':

The Zen tradition is avowedly the Buddhism of Vimalakirti's silence—a claim that is explicitly reinforced by the practice of silent meditation.[8]

But it does not mean that language is to be discredited completely:

Language is not, according to any Mahāyāna school, to be abandoned at the outset; it is not, whatever its limitations, a useless or a wholly misleading cognitive vehicle. To adopt an aphasia or cognitive quietism from the start would be pointless, and, as the Goddess notes, contrary to the practice of the Buddha himself, who uttered an enormous number of words during his career. But of course the episode gets its point precisely from the fact that Buddhist literature is replete with a rhetoric of silence—with episodes of especially significant silence—and indeed, as we discover a mere two chapters later in this very sutra.[5]

The Vimalakirti Sutra has become widely popular in East Asia with the sutra becoming especially popular in the Zen school.[9] John McRae notes that in contrast to India and Tibet where the Vimalakīrti Sūtra left little discernible impact, the sūtra became one of the favorites in East Asian Buddhism.[10] However, he also states that the sūtra was not used as an object of devotion, and that no school was ever formed around it, so that it does not seem to have enjoyed the degree of popularity of some other sūtras.[10]

Richard B. Mather describes the popularity of the Vimalakīrti Sūtra in China as having multiple causes. Among those noted are its "brash" humor, its criticism of śrāvakas and Abhidharma, and the universality and flexibility of its outlook.[11] Mather states that despite its disparagement of śrāvakas, the sūtra is strongly supportive of the Saṃgha, and the text intends to sanction the pursuit of the bodhisattva path by both monastics and laity without opposition to one another.[11]

Hu Shi, an important figure in Chinese language reform in the early 20th century, wrote that the Vimalakīrti Sūtra was among Kumārajīva's three most influential translations (the other two being the Diamond Sūtra and Lotus Sūtra).[12] As a literary work, he praised this version of the sūtra as "half novel and half drama, with the greatest impact on literature and fine arts."[12] Nan Huaijin also regards this translation of the Vimalakīrti Sūtra as unique in Chinese literature, and forming "virtually its own literary realm."[13]

According to Nan Huaijin's description of the Ch'an/Zen monastic system, the abbot of the monastery customarily lived in a small room patterned after that of Vimalakīrti's room.[14] This room, as well as the abbot himself, were colloquially referred to as the fāngzhàng (Ch. 方丈), or "ten-foot square," as Vimalakīrti's room is described in the Vimalakīrti Sūtra.[14]

In 1981, the Central Institute of Higher Tibetan Studies published a Sanskrit edition of the Vimalakīrti Nirdeśa Sūtra, entitled Āryavimalakīrtinirdeśo Nāma Mahāyānasūtram (आर्यविमलकीर्तिनिर्देशो नाम महायानसूत्रम्).[15] A true Sanskrit edition (discovered in 1999), i.e. not back-translated from Tibetan, was published in 2006.[16]

In addition to these, earlier translations had been done by Lokakṣema (188 CE), Dharmarakṣa (308 CE), Upaśūnya (545 CE), and Jñānagupta (591 CE). Of the three extant renditions, Kumārajīva's has traditionally been the most popular.

Most versions used in Japan are based on the Chinese Kumārajīva version. The Yuimagyō Gisho (維摩経義疏), or Commentary on the Vimalakīrti Sūtra, is an early work of Japanese Buddhism, and is an annotated edition of the text based on the commentary of the Liang Dynasty Chinese monk Zhizang (458-522 CE).

There are two translations of the Vimalakīrti Nirdeśa Sūtra from the original Sanskrit into the Tibetan language.[17] Chos-nyid-tshul-khrims translated it into Tibetan in the 9th century.[17]