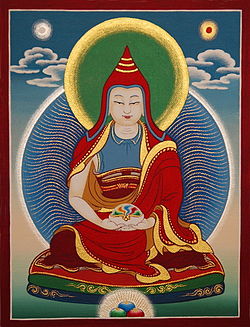 He went to Tibet in the ninth century, where he taught extensively for a period of thirteen years. During this time he composed and translated numerous Sanskrit texts.

According to tradition, when Vimalamitra left Tibet, he promed to return to Tibet every hundred years as an emanation to further the Clear Light teaching of Dzogpachenpo.[2]