In Zen Buddhism, zazen (literally "seated meditation"; Japanese: 座禅; simplified Chinese: 坐禅; traditional Chinese: 坐禪; pinyin: zuò chán; Wade–Giles: tso4-ch'an2, pronounced [tswô ʈʂʰǎn]) is a meditative discipline that is typically the primary practice.[1][2] The precise meaning and method of zazen varies from school to school, but in general it can be regarded as a means of insight into the nature of existence. In the Japanese Rinzai school, zazen is usually associated with the study of koans. The Sōtō School of Japan, on the other hand, only rarely incorporates koans into zazen, preferring an approach where the mind has no object at all, known as shikantaza.[3] 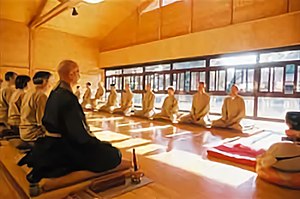 Kōshō Uchiyama writes that Auguste Rodin's The Thinker, in which the "back, waist, legs, arms, and even fingers" are curled up, is the opposite of zazen posture.[4]

Zazen is considered the heart of Japanese Soto Zen Buddhist practice.[1] The aim of zazen is just sitting, that is, suspending all judgmental thinking and letting words, ideas, images and thoughts pass by without getting involved in them.[3][5]

In Zen temples and monasteries, practitioners traditionally sit zazen as a group in a meditation hall, usually referred to as the zendo. The practitioner sits on a cushion called a zafu,[2] which itself is usually placed on top of a low, flat mat called a zabuton.[2]

Before taking one's seat, and after rising at the end of the period of zazen, a Zen practitioner performs a gassho bow to their seat, and a second bow to fellow practitioners.[6]

The beginning of a period of zazen is traditionally announced by ringing a bell three times (shijosho), and the end of a round by ringing the bell either once or twice (hozensho).

Long periods of zazen may alternate with periods of kinhin (walking meditation).[7][8]

The posture of zazen is seated, with folded legs and hands, and an erect but settled spine.[9] The hands are folded together into a simple mudra over the belly.[9] In many practices, the practitioner breathes from the hara (the center of gravity in the belly) and the eyelids are half-lowered, the eyes being neither fully open nor shut so that the practitioner is neither distracted by, nor turning away from, external stimuli.

The legs are folded in one of the standard sitting styles:[2]

In addition, it is not uncommon for modern practitioners to practice zazen in a chair,[2] often with a wedge or cushion on top of it so that one is sitting on an incline, or by placing a wedge behind the lower back to help maintain the natural curve of the spine. One can sit comfortably, but not too comfortably, so as to avoid falling asleep. While each of these styles is commonly taught today, Master Dogen recommended only Kekkafuza and Hankafuza.

In his book Three Pillars of Zen, Philip Kapleau says that practitioners in the Rinzai school face in, towards each other with their backs to the wall, and in the Soto school, practitioners face the wall or a curtain.[10] Kapleau quotes Hakuun Yasutani's lectures for beginners. In lecture four, Yasutani describes the five kinds of zazen: bompu, gedo, shojo, daijo, and saijojo (he adds the latter is the same thing as shikantaza).[11]

Very generally speaking, zazen practice is taught in one of three ways.

Koan practice is usually associated with the Rinzai school and Shikantaza with the Sōtō school. In reality many Zen communities use both methods depending on the teacher and students.

The initial stages of training in zazen resemble traditional Buddhist samatha meditation in actual practice, and emphasize the development of the power of concentration, or joriki[12] (定力) (Sanskrit samādhibala). The student begins by focusing on the breath at the hara/tanden[13] with mindfulness of breath (ānāpānasmṛti) exercises such as counting breath (sūsokukan 数息観) or just watching it (zuisokukan 随息観). Mantras are also sometimes used in place of counting. Practice is typically to be continued in one of these ways until there is adequate "one-pointedness" of mind to constitute an initial experience of samadhi. At this point, the practitioner moves to one of the other two methods of zazen.

Having developed awareness, the practitioner can now focus his or her consciousness on a koan as an object of meditation. Since koans are, ostensibly, not solvable by intellectual reasoning, koan introspection is designed to shortcut the intellectual process leading to direct realization of a reality beyond thought.

Shikantaza is a form of meditation, in which the practitioner does not use any specific object of meditation;[3] rather, practitioners remain as much as possible in the present moment, aware of and observing what passes through their minds and around them. Dogen says, in his Shobogenzo, "Sitting fixedly, think of not thinking. How do you think of not thinking? Nonthinking. This is the art of zazen."[14]