From Encyclopedia of Buddhism
(Redirected from Buddhacharita)
Jump to: navigation, search 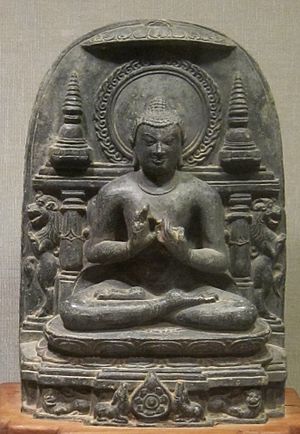 The first text of this title was written in the first century by the monk Sangaraksa. This text, written in a combination of verse and prose, is no longer available in the orginal Sanskrit. A Chinese translation of this text still exits.[1][3]

The second text was written in verse in the style of Indian epic poems by the India writer Aśvaghoṣa in the early second century CE.[4] This version of the Buddhacarita became very popular throughout Asia. "Because of the early date of Aśvaghoṣa’s epic poem, it is of great importance for both the history of Indian Buddhism, as well as the study of classical Indian linguistics and thought."[5]

Ashvagosha's text begins with a description of Gautama Buddha's parents, King Śuddhodana and Queen Maya, and ends with the events occuring shortly after the Buddha's paranirvana.[6] "Based closely on the biographical information in the Pali Tipitaka, Asvaghosa's Buddhacarita is remarkably free from the mythological accretions that surrounded the Buddha at the time, and is widely considered a masterpiece of Sanskrit literature."[1]

Encyclopedia Britannica states: "The author, who lived in northern India in the 1st–2nd century CE, created a loving account of the Buddha’s life and teachings, one that—in contrast to other treatments such as the Mahavastu (“Great Story”) and Lalitavistara (“Full Description of the Play [of the Buddha]”)—is both artistically arranged and restrained in its description of miracles. His work also reflects a vast knowledge of Indian mythology and of pre-Buddhist philosophies, plus a court poet’s interest in love, battle, and statecraft."[7]

Buswell states: "The Buddhacarita has served an important role within the Buddhist tradition itself, as the canonical works do not offer a systematic, chronological account of the Buddha’s life from his birth through his death."[8]

Only the first half of Ashvagosha's text remains intact in Sanskrit, but all 28 chapters are preserved in Chinese and Tibetan translations.[7][9]

The Chinese translation was made in 420 AD by Dharmakṣema.[10] In the 7th or 8th century, a Tibetan version was made which "appears to be much closer to the original Sanskrit than the Chinese".[11][12]