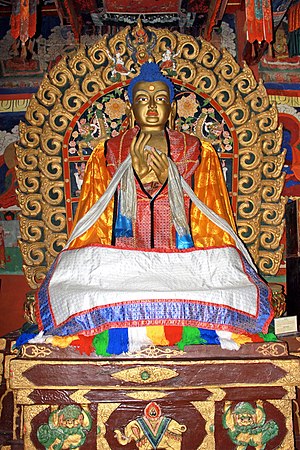 Dīpankara (Sanskrit and Pali Dīpaṃkara, "Lamp bearer") is one of the Buddhas of the past. He is said to have lived on Earth one hundred thousand aeons ago. According to some Buddhist traditions, Dīpankara was a Buddha who reached enlightenment eons prior to Gautama Buddha, the historical Buddha.

Generally, Buddhists believe that there has been a succession of many Buddhas in the distant past and that many more will appear in the future; Dīpankara, then, would be one of numerous previous Buddhas, while Gautama was the most recent, and Maitreya will be the next Buddha in the future.

Chinese Buddhism tends to honor Dīpankara as one of many Buddhas of the past. Dīpankara, Gautama, and Maitreya are "the Buddhas of Three Times" in Yiguandao. 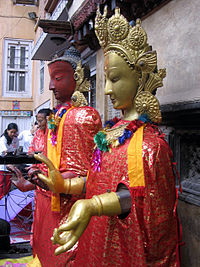 Statues of Dīpankara in Kathmandu. 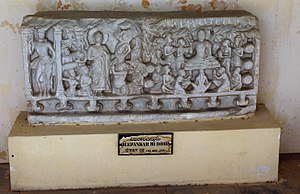 Dīpankara is generally represented as a sitting Buddha, but his depictions as a standing Buddha are common in China, Thailand, and Nepal; with the right hand he generally forms a protection mudra (abhaya mudra), and often he forms it with both hands.

Dīpankara is rarely depicted alone; one of the Buddhas of Bamiyan, destroyed by the Taliban government in Afghanistan in 2001, was said to portray Dīpankara. Statues of Dīpankara can also be found in the Longmen and Yungang Grottoes in China.

One story shown in Buddhist art stupas has Gautama Buddha (also known as Shakyamuni) in a former incarnation known as Sumedha, a rich Brahmin turned hermit kneeling and laying his long black hair on the ground, in an act of piety that the Dīpankara Buddha could cross a puddle of mud without soiling his feet.[1][2]

This story between Dīpankara Buddha and Sumedha occurred many lifetimes before Sumedha's eventual enlightenment as Shakyamuni Buddha. From this act, Dīpankara told Sumedha "In the ages of the future you will come to be a Buddha called 'Shakyamuni'",[3] to which Sumedha replied, "I am to become a Buddha, awakened to enlightenment; may you tread with your feet on my hair - on my birth, old age, and death."

Dīpankara Buddha then said, "Freed from human existence, you will become an effective teacher, for the sake of the world. Born among the Shakyas, as the epitome of the Triple World, the Lamp of all Beings, you will be known as Gautama. You will be the son of King Suddhodana and Queen Maya. Sariputta and Moggallana will be your chief disciples. Your caretaker will be named Ananda."

In the 40-plus years of his life after enlightenment, the Buddha Shakayamuni is said to have recounted almost 554 past life stories, (called Jataka tales) of his prior existences. Gautama Buddha is quoted as saying a person starts the journey to become a Buddha filling 10 Paramita or "perfections". Some sources and scriptures recount that the Bodhisattva Gautama was born as Prince Sumedha in the time of Dīpankara Buddha, and was rich and gave away all his wealth to become a monk. It is said that Gautama Bodhisattva received his first Niyatha Vivarana, (or definite foresighting by a Buddha) from Dīpankara Buddha. This encounter, among many other predictions of Shakyamuni Buddha's future enlightenment, can be found in a Mahayana text named the Sangatha Sutra.[4]

By the 17th century, Dīpankara had become a figure of veneration in Nepalese Buddhist communities. These followers consider him a protector of merchants and associate him with alms-giving.

He is also considered the protector of the sailors, and sometimes statues of Dīpankara are found on the coastline to guide and protect the ships in their route.

The Buddhavamsa says that Dipamkara achieved Nirvana in Nandarama, where a stupa was built which was thirty six yojanas high.[5]