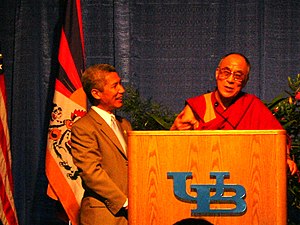 Thupten Jinpa Langri was born in Tibet in 1958. He received his early education and training as a monk at Zongkar Choede Monastery[1] in Hunsur, South India and later joined the Shartse College of Ganden monastic university,[1] in Mundgod, South India, where he received the Geshe Lharam degree. He taught Buddhist epistemology, metaphysics, Middle Way philosophy and Buddhist psychology at Ganden for five years. Jinpa also holds a B.A. Honors degree in Western Philosophy and a Ph.D. degree in Religious Studies, both from Cambridge University, UK.[2][1]

From 1996 to 1999, he was the Margaret Smith Research Fellow in Eastern Religion at Girton College, Cambridge and he has now established the Institute of Tibetan Classics where he is both president and editor-in-chief of the Institute's translation series Classics in Tibet.[1] He is also a member of the advisory board of the Mind and Life Institute, dedicated to fostering creative dialogue between the Buddhist tradition and Western science.[2]

He is a Visiting Research Scholar at the Stanford Institute for Neuro-Innovation and Translational Neurosciences at Stanford University. [3]

Geshe Thupten Jinpa has written many books and articles. His latest works are Tibetan Songs of Spiritual Experience (co-edited with Jas Elsner) and Self, Reality and Reason in Tibetan Thought: Tsongkhapa's Quest for the Middle View..[4]