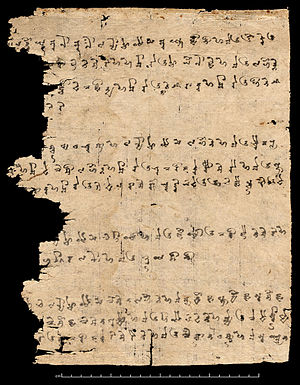 (Eastern) Saka or Sakan is a variety of Eastern Iranian languages, attested from the ancient Buddhist kingdoms of Khotan, Kashgar and Tumshuq in the Tarim Basin, in what is now southern Xinjiang, China. It is a Middle Iranian language.[1] The two kingdoms differed in dialect, their speech known as Khotanese and Tumshuqese.

Documents on wood and paper were written in modified Brahmi script with the addition of extra characters over time and unusual conjuncts such as ys for z.[2] The documents date from the fourth to the eleventh century. Tumshuqese was more archaic than Khotanese,[3] but it is much less understood because it appears in fewer manuscripts compared to Khotanese. Both dialects share features with modern Pashto and Wakhi. The language was known as "Hvatanai" in contemporary documents.[4] Many Prakrit terms were borrowed from Khotanese into the Tocharian languages.[5]