Yaśodharā (Pali: Yasodharā) was the wife of Prince Siddhartha —till he left his home to become a śramaṇa—the mother of Rāhula, and the sister of Devadatta.[1][2] She later became a bhikkhunī and is considered an arahatā.[3]

Yaśodhara was the daughter of King Dandapani,[4][5] and Amita, sister of the Buddha's father, King Śuddhodana. She was born on same day in the month of "Vaishaka" as prince Siddhartha . Her grandfather was Añjana a Koliya[6] chief, her father was Dandapani and her mother, Amitā, came from a Shakya family. The Shakya and the Koliya were branches of the Ādicca (Sanskrit: Aditya) or Ikshvaku dynasty. There were no other families considered equal to them in the region and therefore members of these two royal families married only among themselves.[7]

She was wedded to her cousin, the Shakya prince Siddhartha, when they were both 16. At the age of 29, she gave birth to their only child, a boy named Rāhula. On the 7th night of his birth, the prince left the palace. Yaśodharā was devastated and overcome with grief. Once prince Siddhartha left his home at night for enlightenment, without letting the sleeping Yashodhara know about him. The next day, Yashodhara was surprised by the absence of the prince. Later, when she came to know that he had left, Yashodhara decided to start leading a simple life.[8] Although relatives sent her messages to say that they would maintain her, she did not take up those offers. Several princes sought her hand but she rejected the proposals. Throughout his six-year absence, Princess Yaśodharā followed the news of his actions closely.

When the Buddha visited Kapilavastu after enlightenment, Yaśodharā did not go to see her former husband but ask Rahula to go to Buddha to seek inheritance. For herself, she thought: "Surely if I have gained any virtue at all the Lord will come to my presence." In order to fulfill her wish, Buddha came into her presence and admired her patience and sacrifice.

Some time after her son Rāhula became a novice monk, Yaśodharā also entered the Order of Monks and Nuns and within time attained the state of an arahat. She was ordained as bhikkhuni with the five hundred women following Mahapajapati Gotami that first established the bhikkhuni order. She died at 78, two years before Buddha's parinirvana (death).[9] 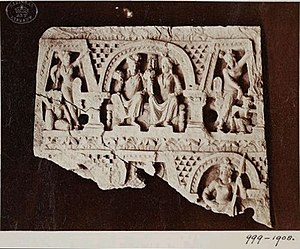 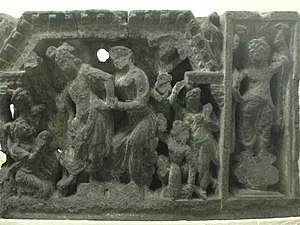 In the Chinese: 佛本行集經, The Collective Sutra of the Buddha's Past Acts, Yashodharā meets Siddhārtha Gautama for the first time in a previous life, when as the young Brahmin (ancient Indian priest) Sumedha, he is formally identified as a future Buddha by the buddha of that era, Dīpankara Buddha. Waiting in the city of Paduma for Dīpankara Buddha, he tries to buy flowers as an offering but soon learns that the king already bought all the flowers for his own offering. Yet, as Dipankara is approaching, Sumedha spots a girl named Sumithra (or Bhadra) holding seven lotus flowers in her hands. He speaks to her with the intention of buying one of her flowers, but she recognises at once his potential and offers him five of the lotuses if he would promise that they would become husband and wife in all their next existences.[10]

In the thirteenth chapter of the Lotus Sutra, Yaśodharā receives a prediction of future buddhahood from Gautama Buddha as does Mahapajapati.[11]

The meaning of the name Yaśodhara (Sanskrit) [from yaśas "glory, splendour" + dhara "bearing" from the verbal root dhri "to bear, support"] is Bearer of glory. The names she has been called besides Yaśodharā are: Yaśodharā Theri (doyenne Yaśodharā), Bimbādevī, Bhaddakaccānā and Rāhulamātā (mother of Rahula).[12] In the Pali Canon, the name Yaśodharā is not found; there are two references to Bhaddakaccānā.[13]

Several other names are identified as wives of the Buddha in different Buddhist traditions, including Gopā or Gopī, Mṛgajā, and Manodharā; according to the Mulasarvastivada Vinaya and several other sources, the Buddha in fact had three wives, and a Jataka story quoted by Nagarjuna specifies two.[14] Thomas Rhys Davids offered the interpretation that the Buddha had a single wife who acquired various titles and epithets over the years, eventually leading to the creation of origin stories for multiple wives.[14] Noel Peri was the first scholar to treat the issue at length, examining the Chinese and Tibetan sources as well as the Pali. He observed that early sources (translated before the 5th Century) seemed to consistently identify the Buddha's wife as 'Gopī', and that after a period of inconsistency 'Yaśodhara' emerged as the favored name for texts translated in the latter half of the 5th Century and later.[14] In addition to Rhys David's theory, he suggests other interpretations that included the possibility of multiple marriages, which in some cases better fit with the different variations in stories of the Buddha's life, suggesting that these inconsistencies emerged when multiple distinct stories were combined into a single narrative.[14] He also suggested that the preference in later interpretations for a single wife may reflect an accommodation of changing social mores that preferred monogamy over other forms of traditional marriage.[14]