From Encyclopedia of Buddhism
Jump to: navigation, search
This article is about the contemporary Buddhist monk. For the city, now a district, previously in Republic of China's Chahar Province and now part of Hebei, see Xuanhua District. 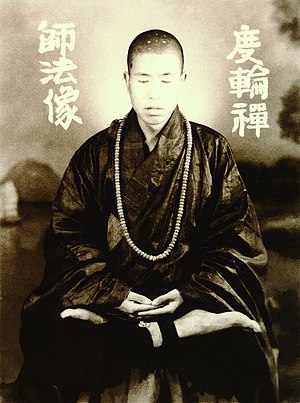 Hsuan Hua (Chinese: 宣化; pinyin: Xuānhuà; literally: "proclaim and transform"; April 16, 1918 – June 7, 1995), also known as An Tzu and Tu Lun, was a monk of Chan Buddhism and a contributing figure in bringing Chinese Buddhism to the United States in the 20th century.

Hsuan Hua founded several institutions in the US. The Dharma Realm Buddhist Association[1] (DRBA) is a Buddhist organization with chapters in North America, Australia and Asia. The City of Ten Thousand Buddhas (CTTB) in Ukiah, California, is one of the first Chan Buddhist monasteries in America. Venerable Master Hsuan Hua founded Dharma Realm Buddhist University at CTTB. The Buddhist Text Translation Society works on the phonetics and translation of Buddhist scriptures from Chinese into English, Vietnamese, Spanish, and many other languages.

Hsuan Hua, a native of Shuangcheng County of Jilin (now Wuchang District, Harbin, Heilongjiang), was born Bai Yushu (白玉書) on April 16, 1918. His parents were devout Buddhists. At an early age, Hua became a vegetarian like his mother, and decided to become a Buddhist monk.

At the age of 15, he took refuge in the Three Jewels under the Venerable Chang Zhi. That same year he began to attend school and studied texts of various Chinese schools of thought, and the fields of medicine, divination, astrology, and physiology. At 19 years of age, Hua became a monastic, under the Dharma name An Tzu. (安慈)

He made the following eighteen vows to all sentient beings:

1. I vow that as long as there is a single Bodhisattva in the three periods of time throughout the ten directions of the Dharma Realm, to the very end of empty space, who has not accomplished Buddhahood, I too will not attain the right enlightenment.

2. I vow that as long as there is a single Pratyekabuddha in the three periods of time throughout the ten directions of the Dharma Realm, to the very end of empty space, who has not accomplished Buddhahood, I too will not attain the right enlightenment.

3. I vow that as long as there is a single Shravaka in the three periods of time throughout the ten directions of the Dharma Realm, to the very end of empty space, who has not accomplished Buddhahood, I too will not attain the right enlightenment.

4. I vow that as long as there is a single god in the Triple Realm who has not accomplished Buddhahood, I too will not attain the right enlightenment.

5. I vow that as long as there is a single human being in the worlds of the ten directions who has not accomplished Buddhahood, I too will not attain the right enlightenment.

6. I vow that as long as there is a single asura who has not accomplished Buddhahood, I too will not attain the right enlightenment.

7. I vow that as long as there is a single animal who has not accomplished Buddhahood, I too will not attain the right enlightenment.

8. I vow that as long as there is a single hungry ghost who has not accomplished Buddhahood, I too will not attain the right enlightenment.

9. I vow that as long as there is a single hell-dweller who has not accomplished Buddhahood, I too will not attain the right enlightenment.

10. I vow that as long as there is a single god, immortal, human, asura, air-bound or water-bound creature, animate or inanimate object, or a single dragon, beast, ghost, spirit, or the like of the spiritual realm that has taken refuge with me and has not accomplished Buddhahood, I too will not attain the right enlightenment.

11. I vow to fully dedicate all blessings and bliss which I myself ought to receive and enjoy to all living beings of the Dharma Realm.

12. I vow to fully take upon myself all sufferings and hardships of all living beings in the Dharma Realm.

13. I vow to manifest innumerable bodies as a means to gain access into the minds of living beings throughout the universe who do not believe in the Buddha-dharma, causing them to correct their faults and tend toward wholesomeness, repent of their errors and start anew, take refuge in the Triple Jewel, and ultimately accomplish Buddhahood.

14. I vow that all living beings who see my face or even hear my name will fix their thoughts on Bodhi and quickly accomplish the Buddha Way.

15. I vow to respectfully observe the Buddha's instructions and cultivate the practice of eating only one meal per day.

16. I vow to enlighten all sentient beings, universally responding to the multitude of differing potentials.

17. I vow to obtain the five eyes, six spiritual powers, and the freedom of being able to fly in this very life.

18. I vow that all of my vows will certainly be fulfilled.

I vow to save the innumerable living beings.

I vow to eradicate the inexhaustible afflictions.

I vow to study the illimitable Dharma-doors.

I vow to accomplish the unsurpassed Buddha Way.[2]

In 1959, Hsuan Hua sought to bring Chinese Buddhism to the West.[3] He instructed his disciples in America to establish a Buddhist association, initially known as The Buddhist Lecture Hall, which was renamed the Sino-American Buddhist Association before taking its present name: the Dharma Realm Buddhist Association.

Hsuan Hua traveled to Australia in 1961 and taught there for one year, returning to Hong Kong in 1962. That same year, at the invitation of American Buddhists, he traveled to the United States; his intent was to "come to America to create Patriarchs, to create Buddhas, to create Bodhisattvas".[4]

Hsuan Hua resided in San Francisco, where he built a lecture hall. Hsuan Hua began to attract young Americans who were interested in meditation. He conducted daily meditation sessions and frequent Sutra lectures.

At that time, the Cuban Missile Crisis occurred between the United States and the Soviet Union, and Hsuan Hua embarked on a fasting period for thirty-five days to pray for an end to the hostilities and for world peace. In 1967, Hsuan Hua moved the Buddhist Lecture Hall back to Chinatown, locating it in the Tianhou Temple.

In 1968, Hsuan Hua held a Shurangama Study and Practice Summer Session. Over thirty students from the University of Washington in Seattle came to study the Buddha’s teachings. After the session was concluded, five young Americans (Bhikṣu Heng Chyan, Heng Jing, and Heng Shou, and Bhikṣuṇīs Heng Yin and Heng Ch'ih) requested permission to take full ordination.

Venerable Hsuan Hua lectured on the entire Śūraṅgama Sūtra in 1968 while he was in the United States. These lectures were recorded in an eight-part series of books containing the sutra and a traditionally rigorous form of commentary that addresses each passage. It was again lectured by the original translator monks and nuns of the City of Ten Thousand Buddhas at Dharma Realm Buddhist University in the summer of 2003.

With the founding of his American Sangha, Hsuan Hua embarked on his personal vision for Buddhism in the United States:

Because of the increasing numbers of people who wished to become monks and nuns under Hsuan Hua's guidance, in 1972 he decided to hold ordination ceremonies at Gold Mountain Dhyana Monastery. Two monks and one nun received ordination. Subsequent ordination platforms have been held at the City of Ten Thousand Buddhas in 1976, 1979, 1982, 1989, 1991, and 1992, and progressively larger numbers of people have received full ordination. Over two hundred people from countries all over the world were ordained under him.

Having traveled to Thailand and Burma in his youth to investigate the Southern Tradition of Buddhism, Hsuan Hua wanted to bridge what he perceived as a rift between the Northern (Mahayana) and Southern (Theravada) traditions. In an address to Ajahn Sumedho and the monastic community at Amaravati Buddhist Monastery on October 6, 1990, Hsuan Hua stated:[7]

On the occasion of the opening ceremony for the Dharma Realm Buddhist University, Hsuan Hua presented Venerable K. Sri Dhammananda of the Theravada tradition with an honorary Ph.D. He also donated a major piece of the land that would become Abhayagiri Buddhist Monastery, a Theravada Buddhist monastery in the Thai Forest tradition of Ajahn Chah, located in Redwood Valley, California.

Hsuan Hua would also invite Bhikkhus from both traditions to jointly conduct the High Ordination.

From July 18 to the 24th of 1987, Hsuan Hua hosted the Water, Land, and Air Repentance Dharma Assembly, a centuries-old ritual often seen as the "king of dharma services" in Chinese Buddhism, at the City of Ten Thousand Buddhas and invited over seventy Buddhists from mainland China to attend. This was the first time the service was known to have been held in North America.

On November 6, 1990, Hsuan Hua sent his disciples to Beijing to bring the Dragon Treasury (Chinese: 龍藏; pinyin: lóngzáng) edition of the Chinese Buddhist canon back to CTTB, furthering his goal of bringing Buddhism to the US.

On June 7, 1995, Hsuan Hua died in Los Angeles at Cedars-Sinai Medical Center. His sudden passing came as a shock to most of his disciples.

Hsuan Hua's funeral lasted from June 8 to July 29. On June 17, Hsuan Hua's body was taken from Southern to Northern California, returning to the City of Ten Thousand Buddhas. All major services during the funeral were presided over by Venerable Ming Yang, abbot of Longhua Temple in Shanghai and a longtime friend of Hsuan Hua's.

On July 28, monks from both Theravada and Mahayana traditions hosted a memorial ceremony and cremation. The two thousand and some followers from the United States, Canada, and various Asian and European countries, including many of Hsuan Hua’s American disciples, came to CTTB to take part in the funeral service. Letters of condolences from Buddhist monks and dignitaries, including from President Bush, were read during the memorial service.

A day after the cremation, July 29, Hsuan Hua's remains were scattered in the air above the City of Ten Thousand Buddhas by two disciples, Heng Sure and Heng Chau, one of Master Hua's first disciples, from a hot air balloon.

After the funeral, memorial services commemorating Hsuan Hua's life were held in various parts of the world, including Taiwan, China, and Canada. His śarīra (relics) were distributed to many of his temples, disciples and followers.