Akashagarbha is one of the eight great bodhisattvas. In the Tibetan tradition, he is often depicted as blue, yellow or green in colour and holding a sword to cut through the destructive emotions.

Ākāśagarbha is regarded as one of the eight great bodhisattvas. His name can be translated as "boundless space treasury" or "void store" as his wisdom is said to be boundless as space itself. He is sometimes known as the twin brother of the "earth store" bodhisattva Kṣitigarbha, and is even briefly mentioned in the Kṣitigarbha Bodhisattva Pūrvapraṇidhāna Sūtra.

Kūkai, the founder of Shingon Buddhism, met a famous monk who is said to have repeatedly chanted a mantra of Ākāśagarbha as a young Buddhist acolyte. Kūkai took a tutorial with him on Kokuzou-Gumonji (a secret doctorine method, 虚空蔵求聞持法).[1] As he chanted the mantra, he experienced a vision whereby Ākāśagarbha told him to go to Tang China to seek understanding of the Mahāvairocana Abhisaṃbodhi Sūtra.[2] Later he would go to China to learn Tangmi from Huiguo, and then go on to found the Shingon sect of esoteric buddhism in Heian Japan.

There are several Mahāyāna sūtras in which Ākāśagarbha Bodhisattva is a central figure:

Additionally, he appears briefly in the final chapter of the Kṣitigarbha Bodhisattva Pūrvapraṇidhāna Sūtra, requesting the Buddha preach on the benefits of praising both the Sūtra and Kṣitigarbha.[3]

The Five Great Ākāśagarbhas are manifestation of the Five Wisdom Buddhas in Esoteric Buddhism. They are said to bring about an increase of benefits such as good health. Within the traditional mandala, they are arranged as follows: 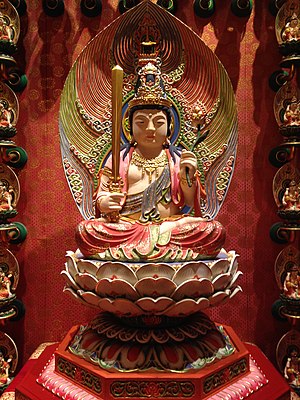 The mantra of Ākāśagarbha is popularly used by Shingon Buddhists, practitioners of Tangmi, and by artists. It is believed to give rise to wisdom and creativity, and dispel ignorance.