In the context of Buddhist logic and epistemology, it refers to the [apprehended] object of any one of the six sensory consciousnesses.[1]

What is the difference between a sphere, viṣaya, and an object, ālambana?
Viṣaya is the place where the organ exercises its activity, seeing, hearing, etc.; ālambana is what is grasped by the mind and the mental states. Thus, whereas the mind and mental states have both viṣaya and ālambana, the eye, the ear, etc., have only viṣaya.
Why term "striking" or "evolving" the activity of the organ or the mind with respects to its viṣaya or ālambana?
Because the organ does not proceed, is not active, beyond the visaya: thus it is struck by the viṣaya (for one says in common usage that one is struck by a wall beyond which one cannot "proceed"). Or rather, "to strike" signifies "to encounter:" this is the process or activity of the organ with respect to its own sphere.[4] 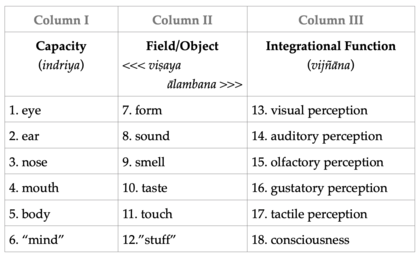 Based on The Buddhist Psychology of Awakening, by Steven D. Goodman. See also Eighteen dhatus.

Steven D. Goodman explains this term in the context of the eighteen dhatus:

Vasubandhu does note, however, two different senses for how to understand column II content [sense fields/objects]. He says that the sensory domains, or fields in column II (dhatus 7–11), are sometimes called “objects” (vishaya) when referring to their dependence on the capacity to process them (dhatus 1–5, column I). This is when one wishes to talk about the sensory field emphasizing the contact being made with the so-called capacity for sensory processing (called the “eye” and so on), those “visibles,” and the other four senses. This is a way of acknowledging that what we call a sensory thing, a sensory occurrence that has something to do with what we might call the seemingly “physical capacity” to process sensory information. But Vasubandhu then goes on to say that these same “sensory domains” (column II) are called “epistemological objects” (alambana) with respect to their contact with the integrative function (vijnana) of column III (dhatus 13–17). Vasubandhu clarifies that the same “content” (column II) is differently named according to which column of “contact” one wants to focus on, contact with either column I or column III.[5][6]

The word object (arammana) as it is used in the Abhidhamma does not have the same meaning as the word object or thing we use in common language.

When we speak about an arammana, an object, we have to specify which kind of arammana.

Thus we see that the word object in the Abhidhamma has a very precise meaning.[7]