From Encyclopedia of Buddhism
(Redirected from Kagyü)
Jump to: navigation, search 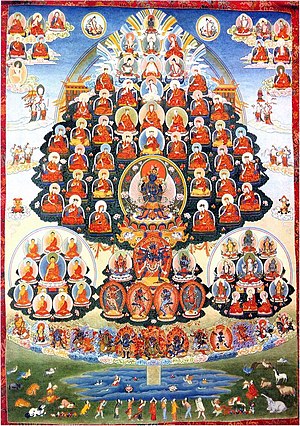 The Kagyu, Kagyü, or Kagyud (Tibetan: བཀའ་བརྒྱུད།, Wylie: bka' brgyud) school, also known as the "Oral Lineage" or Whispered Transmission school, is today regarded as one of four main schools of Tibetan Buddhism. The central teaching of Kagyu is the doctrine of Mahamudra, "the Great Seal".

The early Kagyu tradition soon gave rise to a large number of independent sub-schools or sub-sects. The principle Dagpo Kagyu lineages existing today as organized schools are the Karma Kagyu, Drikung Kagyu and the Drukpa Lineage.

Strictly speaking, the term bka' brgyud "oral lineage", "precept transmission" applies to any line of transmission of an esoteric teaching from teacher to disciple. There are references to the "Atiśa kagyu" for the Kadam or to "Jonang kagyu" for the Jonang and "Ganden kagyu" for the Gelug sects.[1] Today, however, the term Kagyu almost always refers to the Dagpo Kagyu and, less often, to the Shangpa Kagyu.

Some of the more careful Tibetan scholars suggested that the term Dkar brgyud pa be used to refer to the Dwags po Bka' brgyud pa, Shangs pa Bka' brgyud pa and a few minor traditions transmitted by Nā ro pa, Mar pa, Mi la ras pa, or Ras chung pa but did not pass through Sgam po pa. The term Dkar brgyud pa refers to the use of the white cotton meditation garment by all these lineages. This complex is what is normally known, inaccuratly, as the Bka' brgyud pa. Thu'u kwan Blo bzang chos kyi nyi ma sums up the matter: "In some later 'Brug pa texts the written form 'Dkar brgyud' indeed appears, because Mar pa, Mi la, Gling ras, and others wore only white cotton cloth. Nevertheless, it is fine if [they] are all called Bka' brgyud." At Thu'u kwan's suggestion, then, we will side with convention and use the term "Bka' brgyud."[2]

[T]he term "Kagyu" derives from the Tibetan phrase meaning "Lineage of the Four Commissioners" (ka-bab-shi'i-gyu-pa). This four-fold lineage is

Kagyu begins in Tibet with Marpa Lotsawa (1012–1097) who trained as a translator with lotsawa Drogmi Shākya Yeshe (Wylie: 'brog mi lo tsā ba shākya ye shes, 993–1050), and then traveled three times to India and four times to Nepal in search of religious teachings. His principal gurus were the siddhas Nāropa - from whom he received the "close lineage" of mahāmudrā and tantric teachings, and Maitrīpāda - from whom he received the "distant lineage" of mahāmudrā.

Together Marpa, Milarepa and Gampopa are known as "Mar-Mi-Dag Sum" (Wylie: mar mi dwags gsum) and together these three are considered the founders of the Kagyu school of Buddhism in Tibet.

Marpa's guru Nāropa (1016–1100) was the principal disciple of Tilopa (988-1089) from East Bengal. From his own teachers Tilopa received the Four Lineages of Instructions (bka' babs bzhi),[4] which he passed on to Nāropa who codified them into what became known as the Six Doctrines or Six Yogas of Nāropa. These instructions consist a combination of the completion stage (Skt. sampannakrama; Tib. rdzogs rim) practices of different Buddhist highest yoga tantras (Skt. Anuttarayoga Tantra; Wylie: bla med rgyud), which use the energy-winds (Skt. vāyu, Wylie: rlung), energy-channels (Skt. nāḍi, Wylie: rtsa) and energy-drops of the subtle vajra-body in order to achieve the four types of bliss, the clear-light mind and realize the state of Mahāmudrā.

The Mahāmudrā lineage of Tilopa and Nāropa is called the "direct lineage" or "close lineage" as it is said that Tilopa received this Mahāmudrā realisation directly from the Dharmakāya Buddha Vajradhara and this was transmitted only through Nāropa to Marpa.

The "distant lineage" of Mahāmudrā is said to have come from the Buddha in the form of Vajradara through incarnations of the bodhisattvas Avalokiteśvara and Mañjuśrī to Saraha, then from him through Nagarjuna, Shavaripa, and Maitripada to Marpa. The Mahāmudrā teachings from Saraha that Maitripa transmitted to Marpa include the "Essence Mahāmudrā" (Wylie: snying po'i phyag chen) where Mahāmudrā is introduced directly without relying on philosophical reasoning or yogic practices.

According to some accounts, on his third journey to India Marpa also met Atiśa (982–1054) who later came to Tibet and helped found the Kadam lineage[5]

Marpa and his successors (Marpa Kagyu)

Marpa established his "seat" at Drowolung (Wylie: gro bo lung) in Lhodrak in southern Tibet just north of Bhutan. Marpa married the Lady Dagmema, and took eight other concubines as mudras. Collectively they embodied the main consort and eight wisdom dakini in the mandala of his Yidam, Hevajra. Marpa wanted to entrust the transmission lineage to his oldest son, Darma Dode, following the usual Tibetan practice of the time to transmit of lineages of esoteric teachings via hereditary lineage (father-son or uncle-nephew), but his son died at an early age and consequently he passed his main lineage on through Milarepa. Darma Dode's incarnation as Indian master Tiphupa became important for the future development of Kagyu in Tibet.

Other important students of Marpa include:

Milarepa and his disciples

Among Milarepa's many students were Gampopa (1079–1153), a great scholar, and the great yogi Rechung Dorje Drakpa, also known as Rechungpa.

Gampopa (1079–1153) combined the stages of the path tradition of the Kadam order with teaching and practice of the Mahāmudrā and the Six Yogas of Naropa he received from Milarepa synthesizing them into one lineage, which came to be known as Dagpo Kagyu—the main lineage of the Kagyu tradition passed down via Naropa as we know it today. The other main lineage of the Kagyu is the Shangpa Kagyu, passed down via Niguma.

Following Gampopa's teachings, there evolved the so-called "Four Major and Eight Minor" lineages of the Dagpo (sometimes rendered "Tagpo" or "Dakpo") Kagyu School. This phrase is descriptive of the generation or order in which the schools were founded, not of their importance.

The principle Dagpo Kagyu lineages existing today as organized schools are the Karma Kagyu, Drikung Kagyu and the Drukpa Lineage. For the most part, the teachings and main esoteric transmissions of the other Dagpo Kagyu lineages have been absorbed into one or another of these three independent schools.

The terminology "primary and secondary" (che chung) for the Kagyu schools can only be traced back as far as Kongtrul's writings (19th century).[citation needed] The Tibetan terminology "che chung", literally "large (and) small," does not reflect the size or influence of the schools, as for instance the Drikung school was in the 13th century probably the largest and most influential of them, although it is, according to Kongtrul, "secondary".[citation needed]

The Drubgyu Karma Kamtsang, often known simply as Karma Kagyu, was founded by one of Gampopa's main disciples Düsum Khyenpa, 1st Karmapa Lama (1110–1193). The Karma Kagyu itself has three subschools in addition to the main branch:[12]

Rangjung Dorje, 3rd Karmapa Lama, was influential in the spread of Buddha-nature teachings, which are still being taught in contemporary Kagyu. He also influenced Dolpopa Sherab Gyaltsen, the founder of the Jonang school who systematized the shentong teachings.[13]

This school was popular in the Principality of Nangchen in Kham (modern Nangqên County, Yushu Tibetan Autonomous Prefecture, southern Qinghai) where it has survived in one or two pockets to the present day.

The Tshalpa Kagyu tradition continued to function independently until the 15th century when it was absorbed by the Gelug, who still maintain many of its transmissions.[15] All of the former Tshelpa properties became Gelug possessions under the administration of Sera monastery.

From 1435 to 1481 the power of the Phagmodrupa declined and they were eclipsed by the Rinpungpa (Wylie: rin spungs pa) of Tsang, who patronized the Karma Kagyu.

The eight secondary lineages (zung bzhi ya brgyad or chung brgyad) of the Dagpo Kagyu all trace themselves to disciples of Phagmo Drupa. Some of these secondary schools, notably the Drikung Kagyu and Drukpa Kagyu, became more important and influential than others.

One of the most important of the Kagyu sects still remaining today, the Drikung Kagyu (འབྲི་གུང་བཀའ་པརྒྱུད་པ) takes its name from Drigung Monastery founded by Jigten Sumgön, also known as Drikung Kyopa.

Since the 15th century the Drikung Kagyupa received influence from the "northern terma" (Wylie: byang gter) teachings of the Nyingma tradition.

The Drukpa Lineage was established by Ling Repa's main disciple, Tsangpa Gyare (1161–1211), who established monasteries at Longbol (Wylie: klong rbol) and Ralung Monastery (Wylie: rwa lung). Later, Tsangpa Gyare went to a place called Nam Phu where, legend has it, nine roaring dragons rose from the ground and soared into the sky. The Tibetan word for dragon is Druk (Wylie: 'brug), so Tsangpa Gyare's lineage and the monastery he established at the place became known as the Drukpa and he became known as the Gyalwang Drukpa. This school became widespread in Tibet and in surrounding regions. Today the Southern Drukpa Lineage is the state religion of Bhutan, and in the western Himalayas, Drukpa Lineage monasteries are found in Ladakh, Zanskar, Lahaul and Kinnaur.

Along with the Mahamudra teachings inherited from Gampopa and Phagmo Drupa Dorje Gyalpo, particular teachings of the Drukpa Lineage include the "Six Cycles of Equal Taste" (Wylie: ro snyom skor drug), a cycle of instructions said to have been hidden by Rechung Dorje Drakpa and discovered by Tsangpa Gyare, and the "Seven Auspicious Teachings" (Wylie: rten 'brel rab bdun) revealed to Tsangpa Gyare by seven Buddhas who appeared to him in a vision at Tsari.

The Yazang Kagyu (Wylie: g.ya' bzang bka' brgyud) founded by Sharawa Kalden Yeshe Sengge (d. 1207). His foremost disciple was Yazang Chöje Chö Mönlam (1169–1233) who in 1206 established the monastery of Yabzang, also known as Nedong Dzong, in Yarlung. The Yazang Kagyu survived as an independent school at least until the 16th century.

The Shangpa Kagyu (Wylie: shangs pa bka' brgyud) differs in origin from the better known Marpa or Dagpo school that is the source of all present-day Kagyu schools. The Dagpo school and its branches primarily came from the lineage of the Indian siddhas Tilopa and Naropa transmitted in Tibet through Marpa, Milarepa, Gampopa and their successors. In contrast, the Shangpa lineage descended from two female siddhas, Naropa's consort Niguma[26] and Virupa's disciple Sukhasiddhi, transmitted in Tibet in the 11th century through Khyungpo Nenjor. The tradition takes its name from the Shang Valley where Khyungpo Nenjor established the gompa of Zhongzhong or Zhangzhong.

For seven generations, the Shangpa Kagyu lineage remained a one-to-one transmission.[27] Although there were a few temples and retreat centres in Tibet and Bhutan associated with the Shangpa transmission, it never really was established as an independent religious institution or sect. Rather, its teachings were transmitted down through the centuries by lamas belonging to many different schools.

In the 20th century, the Shangpa teachings were transmitted by the first Kalu Rinpoche, who studied at Palpung Monastery, the seat of the Tai Situpa.

The central teaching of Kagyu is the doctrine of Mahamudra, "the Great Seal", as elucidated by Gampopa in his various works. This doctrine focuses on four principal stages of meditative practice (the Four Yogas of Mahamudra), namely:

It is through these four stages of development that the practitioner is said to attain the perfect realization of Mahamudra.

The Six Yogas of Naropa

Important practices in all Kagyu schools are the tantric practices of Cakrasaṃvara and Vajravārāhī, and particularly the Six Yogas of Naropa.

(Note: Karma Kagyu related sites that apparently do not take sides on the so-called "Karmapa controversy").