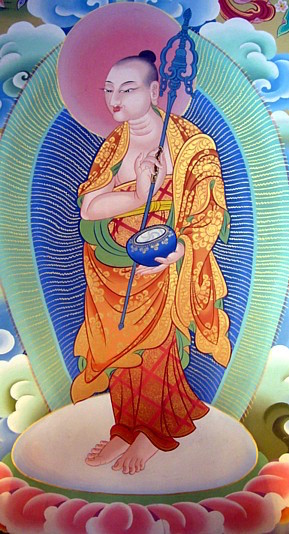 "The Buddha declared Śāriputra and Mahāmaudgalyāyana his chief disciples the day they were ordained, giving as his reason the fact that both had exerted themselves in religious practice for countless previous lives. Śāriputra was declared chief among the Buddha’s disciples in wisdom, while Mahāmaudgalyāyana was chief in mastery of supranormal powers (ṛddhi)."[1]

Traditional accounts relate that Maudgalyāyana and Śāriputra become spiritual wanderers in their youth. After having searched for spiritual truth for a while, they come into contact with the Buddhist teachings. Eventually they meet the Buddha himself and ordained as monks under him. Maudgalyāyana attains enlightenment shortly after that.

Maudgalyayana and Śāriputra are depicted in Buddhist art as the two disciples that accompany the Buddha, and they have complementing roles as teachers. As a teacher, Maudgalyayana is known for his psychic powers (ṛddhi), and he is often depicted using these in his teaching methods. In early Buddhist texts, Maudgalyāyana is instrumental in re-uniting the monastic community after Devadatta causes a schism. Maudgalyāyana dies at the age of eighty-four, killed through the efforts of a rival sect. This violent death is described in Buddhist scriptures as a result of Maudgalyāyana's karma from a previous life.

Through post-canonical texts, Maudgalyāyana became known for his filial piety through a popular account of him transferring his merit to his mother. Maudgalyāyana has also traditionally been associated with meditation and sometimes Abhidharma texts, as well as the Dharmaguptaka school.