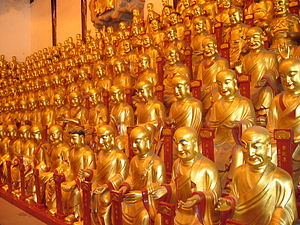 Statues of the 500 arhats in the Longhua temple in Shanghai, P.R. China

Buddhas are supposed to reach nibbāṇa by their own efforts and insights.[1] A sāvakabuddha might also lead others to enlightenment, but cannot teach the dhamma in a time or world where it has been forgotten, because they depend upon a tradition that stretches back to a sammasambuddha.

The term savakabuddha is used in Theravadin commentaries[2] but does not occur in the scriptures of the Pāli Canon.

Sāvaka means "one who hears" – a person who follows the path to enlightenment by means of hearing the instructions of others. Lay persons, who take special vows, are called sāvakas.