Deprecated: The each() function is deprecated. This message will be suppressed on further calls in /home/customer/www/encyclopediaofbuddhism.org/public_html/includes/MagicWordArray.php on line 206
 Minor marks of a great person - Encyclopedia of Buddhism

Minor marks of a great person

From Encyclopedia of Buddhism
(Redirected from Eighty minor marks)
Jump to: navigation, search 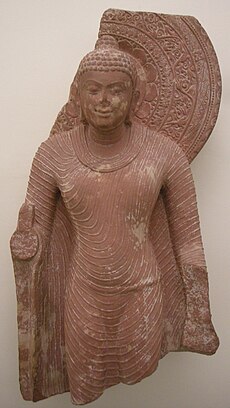 Sculpture of the Buddha from Mathura, India. 5th or 6th century CE

Minor marks of a great person is a list of eighty "secondary characteristics" possessed by both buddhas and chakravartins within Buddhist cosmology.[1]

These "marks" or "signs" are also referred to as:

The eighty minor characteristics are:

Relation to the thirty-two major marks

According to Guang Xing, the 80 minor marks are related to the 32 major marks, and are merely a more detailed description of the Buddha's bodily features.[2]

In the Sarvāstivādin Abhidharma Mahāvibhāṣa Śāstra, the question is posed about the relationship between the major and minor marks, and it is said that the minor marks are among the major marks, but not mixed with them, just as flowers in the forest make the trees distinctive.[2] These 80 minor characteristics became significant as well, as were adopted by Buddhist traditions including both Mahāyāna and Theravāda traditions.[2]

Sources for lists of eighty marks

The 80 minor characteristics of the Buddha are known to be enumerated a number of times in the extant Agamas of the Chinese Buddhist canon.[2]

In Pali literature, the 80 minor characteristics are found in the Apadāna and the Milindapañha.[2]

Some scholars believe the 80 minor characteristics were an early development in the Buddhist tradition, but held as important mostly by the Sarvāstivāda school.[3]