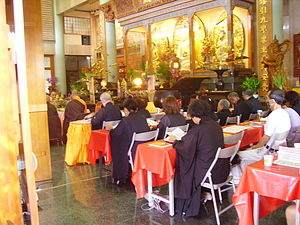 The Kṣitigarbha Bodhisattva Pūrvapraṇidhāna Sūtra (C. Dizang pusa benyuan jing 地藏菩薩本願經) or Kṣitigarbhasūtra is a Mahāyāna sūtra teaching about the bodhisattva Kṣitigarbha and is one of the more popular sūtras in Chinese Buddhism. The longer form of its name translates as Sutra of the Fundamental Vows of the Bodhisattva Kṣitigarbha. The sutra tells of how Kṣitigarbha became a bodhisattva by making great vows to rescue other sentient beings and a description of how he displayed filial piety in his past lifetimes. The sutra also expounds at length the retributions of unwholesome karma, descriptions of Buddhist hells and the benefits of good merit both great and small.

Statue of Kṣitigarbha in Taiwan

The Kṣitigarbhasūtra was first translated from Sanskrit into Chinese in the 7th century during the Tang dynasty by the Tripiṭaka master Śikṣānanda, a monk from Khotan who also provided a new translation of the Avataṃsaka Sūtra and the Laṅkāvatāra Sūtra. Buswell & Lopez 2013, p. 448

Some scholars suspected that instead of being translated, this text may have originated in China since no Sanskrit manuscripts of this text have been found.Buswell 1990, p. 178 Part of the reason for suspicion is that the text advocates filial piety, which was stereotypically associated with Chinese culture. Since then, other scholars such as Gregory Schopen have pointed out that Indian Buddhism also had traditions of filial piety. Schopen 1984 Currently there is no clear evidence indicating either an Indian or Chinese origin for the text.

There are a total of thirteen chapters in the Kṣitigarbhasūtra, which are divided into three sections. The teaching is presented in the form of a dialogue between the Buddha and Kṣitigarbha and takes place in the Trāyastriṃśa Heaven, located on the top of Mount Meru, in front of a vast multitude of sentient beings. It includes tales of Kṣitigarbha's skill at freeing beings from the hells and instructions on dealing with the dying and the dead. Buswell & Lopez 2013, pp. 448–9

This sutra has multiple aspects for buddhists who are in various condition. For example,

In the last Chapter 13, Buddha also spoke about 28 kinds of benefits for "any good man or good woman who should see Ksitigarbha's image and hear this Sutra and, furthermore, read and recite it, and who should also donate incense, flowers, drink, food, clothing and precious treasures as offerings, in addition to giving praise and making obeisance to Bodhisattva Ksitigarbha" [3]

Those 28 benefits of reciting Kṣitigarbhasūtra are as follows:[4]