Prince Shōtoku (聖徳太子, Shōtoku Taishi, February 7, 574 – April 8, 622[1]), also known as Prince Umayado (厩戸皇子, Umayado no ōjî) or Prince Kamitsumiya (上宮皇子, Kamitsumiya no ōji), was a semi-legendary regent and a politician of the Asuka period in Japan who served under Empress Suiko. He was the son of Emperor Yōmei and his consort, Princess Anahobe no Hashihito, who was also Yōmei's younger half-sister. His parents were relatives of the ruling Soga clan[2] and also he was involved in the defeat of the rival Mononobe clan.[3] The primary source of the life and accomplishments of Prince Shōtoku comes from the Nihon Shoki. The Prince is renowned for modernizing the government administration and for promoting Buddhism in Japan.[4]

Over successive generations, a devotional cult arose around the figure of Prince Shōtoku for the protection of Japan, the Imperial Family, and for Buddhism. Key religious figures such as Saichō, Shinran and others claimed inspiration or visions attributed to Prince Shōtoku.[3]

Shōtoku as a Buddhist pilgrim at the age of fourteen.
Template:Small

According to tradition, Shōtoku was appointed regent (Sesshō) in 593 by Empress Suiko (554–628), his aunt.[5] Shōtoku, inspired by the Buddha's teachings, succeeded in establishing a centralized government during his reign. In 603, he established the Twelve Level Cap and Rank System at the court. He is credited with promulgating the seventeen-article constitution.

Shōtoku was an ardent Buddhist and is traditionally attributed the authorship of the Sangyō Gisho or "Annotated Commentaries on the Three Sutras" (the Lotus Sutra, the Vimalakirti Sutra, and the Śrīmālādevī Siṃhanāda Sūtra). The first of these commentaries, Hokke Gisho, is traditionally dated to 615 and thus regarded as "the first Japanese text", in turn making Shōtoku the first known Japanese writer.

In the late 6th century, Shōtoku led an enormous national project to promote Buddhism and he commissioned the construction of Shitennō-ji.[6][4] The Buddhist temple was built in Settsu Province (present-day Osaka) after his military victory against the powerful Mononobe clan, for he is said[by whom?] to have summoned them to crush his enemies. Shōtoku's name has been linked with Hōryū-ji, a temple in Yamato Province, and numerous other temples in the Kansai region. Documentation at Hōryū-ji claims that Suiko and Shōtoku founded the temple in the year 607. Archaeological excavations in 1939 have confirmed that Prince Shōtoku's palace, the Ikaruga no miya (斑鳩宮), stood in the eastern part of the current temple complex, where the Tō-in (東院) sits today.[7] Despite being credited as the founder of Japanese Buddhism, it is also said that the Prince respected Shinto and never visited Buddhist temples without visiting Shinto shrines.[8]

He is said to have been buried at Shinaga in Kawachi Province (modern Osaka Prefecture).[12] 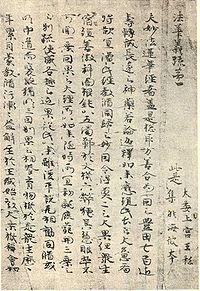 Section of the Lotus Sutra, said to be written in Shōtoku's hand.

A legend claims that when Bodhidharma came to Japan, he met with Prince Shōtoku whilst under the guise of a starving beggar. The Prince asked the beggar to identify himself, but the man did not reply. Instead of going ahead, Shōtoku gave him food, drink, and covered him with his purple garment, telling him to "lie in peace". Shōtoku then sang for the starving man.

The second day, Shōtoku sent a messenger to the starving man, but he was already dead. Hereupon, he was greatly grieved and ordered his burial. Shōtoku later thought the man was no ordinary man for sure, and sending another messenger, discovered the earth had not been disturbed. On opening the tomb there was no body inside, and the Prince's purple garment lay folded on the coffin. The Prince then sent another messenger to claim the garment, and he continued to wear it just as before. Struck by awe, the people praised the Prince: "How true it is that a sage knoweth a sage." This legend is linked with the temple of Daruma-dera in Ōji, Nara, where a stone stupa was found underground, which is exceedingly rare.

The name by which he is best known today, Prince Shōtoku, first appeared in Kaifūsō, written more than 100 years after his death in 622 AD.

The portrait of Prince Shōtoku has appeared on 100, 1,000, 5,000 and 10,000 yen bills.[14] Two bills made with different types of materials and special inks with a face value of 100,000,000 (one hundred million yen) were also issued. The characteristic of these bills is that they have a border around it to prevent its alteration. As characteristics, it has a seal and figures in different positions starting from the middle outwards. The measurements of these 2 issues of bills are 35.3 cm x 16 cm and the other with a small variation of 34.3 by 16.5 cm. These cloth tickets were used for the exchange of important values.[citation needed]