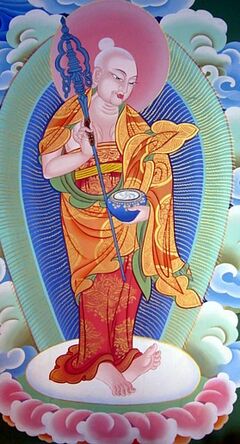 "The Buddha declared Śāriputra and Mahāmaudgalyāyana his chief disciples the day they were ordained, giving as his reason the fact that both had exerted themselves in religious practice for countless previous lives. Śāriputra was declared chief among the Buddha’s disciples in wisdom, while Mahāmaudgalyāyana was chief in mastery of supranormal powers (ṛddhi)."[1]

Particularly in the Pali tradition, Shariputra was regarded as "second only to the Buddha in the depth and range of his understanding, and his ability to teach the Doctrine of Deliverance."[2] The Buddha referred to Shariptra as his "dharma general" (dharmasenāpati), in recognition of Shariputra's knowledge of the dharma and his skill as a teacher.[1]

Shariptra also frequently appears in the Mahayana sutras of the Sanskrit tradition; in some of these sutras, he is used as a counterpoint to represent the Hinayana point of view.

A statue of Śāriputra at Bodh Gaya.

Shariputra was born into a Brahmin family in the village of Upatissa, near Rajagriha. His mother's name was Sari, and he came to be called "Shariputra" ("son of Sari").

Buddhist texts relate that Śāriputra and Maudgalyāyana were childhood friends who became spiritual wanderers in their youth. After having searched for spiritual truth with other contemporary teachers, one day Shariptura encountered a monk named Aśvajit, and Shariputra was so struck by the Aśvajit's serene appearance that he sought him out and questioned him.

"Who is your teacher and whose doctrine do you profess?” Shariputra asked.
Aśvajit replied, “There is, O friend, the Great Recluse, the scion of the Sakyas, who has gone forth from the Sakya clan. Under that Blessed One I have gone forth. That Blessed One is my teacher and it is his Dhamma that I profess.”
Shariputra asked Aśvajit to share some teachings with him.
Aśvajit replied:

Of those dharmas which arise from a cause,
the Tathāgata has stated the cause, and also the cessation;
such is the teaching of the Great Ascetic.[3]

Shariputra was deeply moved by this statement. He immediately sought out his friend Maudgalyayana and together the sought out the Buddha and became his disciples. They ordained as monks under the Buddha, after which the Buddha declared the friends his two chief disciples.

Śāriputra was said to have attained enlightenment as an arhat two weeks after ordination. As chief disciple Śāriputra assumed a leadership role in the Sangha, doing tasks like looking after monks, assigning them objects of meditation, and clarifying points of doctrine. He was the first disciple the Buddha allowed to ordain other monks. Śāriputra died shortly before the Buddha in his hometown and was cremated. According to Buddhist texts, his relics were then enshrined at Jetavana Monastery. Archaeological findings from the 1800s suggest his relics may have been redistributed across the Indian subcontinent by subsequent kings.

In the Mahayana sutras of the Sanskrit tradition, Śāriputra is sometimes presented as a dignified arhat, and in other sutras he is presented as a representative for the limited views of the "Hinayana" path.[1][4]

For example, in the Heart Sutra, Śāriputra plays an important role of respectfully asking the bodhisattva Avalokiteśvara how to attain transcendent wisdom (through the practice of prajnaparamita).

In the Vimalakīrti Sūtra, Śāriputra is depicted as being unable to readily grasp the Mahayana doctrines presented by Vimalakīrti and others, and is rebuked or defeated in debate by a number of interlocutors, including a female deity (deva) who refutes Shariputra's "Hinayana" assumptions regarding gender and form.

In this sutra, Śāriputra asks the female diety why, if she is so wise and capable, does she has a female body. The deva then proceeded to teach a lesson in nondualism by switching their sexes, and stating, "in all things, there is neither male nor female."[5]

In the Lotus Sutra,[6] the Buddha predicts that Sāriputta will become a fully-awakened Buddha one day named "Flower Glow Tathāgata", at which Sāriputta's mind is said to "dance with joy".[7]