Śīlabhadra (Sanskrit; traditional Chinese: 戒賢; ; pinyin: Jièxián) (529–645[1]) was a Buddhist monk and philosopher. He is best known as being an abbot of Nālandā monastery in India, as being an expert on Yogācāra teachings, and for being the personal tutor of the Chinese Buddhist monk Xuanzang. 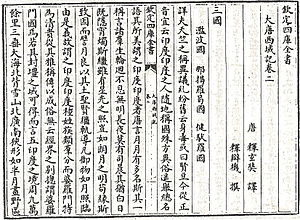 A page from the Great Tang Records on the Western Regions, a text widely used for its accurate descriptions of 7th century India

Śīlabhadra was born in the Samataṭa kingdom, in the Brahmin caste, to the royal family there.[2] As a young man he went westward to Nālandā, and was trained there by Dharmapāla of Nālandā, who also ordained him as a Buddhist monk.[3] According to Xuanzang's account, Śīlabhadra gradually became famous for his learning even in foreign countries. At 30 years old, after defeating a Brahmin from southern India in a religious debate, the king insisted on giving him the revenue of a city, which Śīlabhadra accepted with reluctance, and he built a monastery there and kept it funded it with the city's revenues.[3] The name of this monastery was Śīlabhadra Vihāra.[2]

At the age of 33, the Chinese Buddhist monk Xuanzang made a dangerous journey to India in order to study Buddhism there and to procure Buddhist texts for translation into Chinese.[4] Xuanzang spent over ten years in India traveling and studying under various Buddhist masters.[4] These masters included Śīlabhadra, the abbot of Nālandā monastery, who was then 106 years old.[5] Śīlabhadra is described as being very old at this time and highly revered by the monks:[6]

He was then very old, his nephew Buddhabhadra being 70 years of age. The pilgrim was met by twenty grave-looking monks, who introduced him to their chief, the venerable "Treasure of the True Law," whose proper name of Śīlabhadra they did not dare to pronounce. Xuanzang advanced towards him according to the established etiquette on his elbows and knees, a custom which is still preserved in Burma under the name of Shikoh.

Xuanzang was tutored in the Yogācāra teachings by Śīlabhadra for several years at Nālandā. Upon his return from India, Xuanzang brought with him a wagon-load of Buddhist texts, including important Yogācāra works such as the Yogācārabhūmi-śastra.[8] In total, Xuanzang had procured 657 Buddhist texts from India.[4] Upon his return to China, he was given government support and many assistants for the purpose of translating these texts into Chinese.

According to the Indian translator Divākara, Śīlabhadra divided the Buddhist teachings into three turnings of the Dharma Wheel, following the divisions given in the Saṃdhinirmocana Sūtra:[9]

Śīlabhadra considered the teachings from the third turning (Yogācāra) to be the highest form of Buddhism, because it fully explains the three natures, but the Mādhyamaka teacher Jñānaprabha notably opposed this idea.[9] Instead, Jñānaprabha regarded Yogācāra teachings to be below Mādhyamaka, because they (purportedly) posit the real existence of a mind.[9]

Śīlabhadra composed the text Buddhabhūmivyākhyāna, which is now extant only in the Tibetan language.[1]