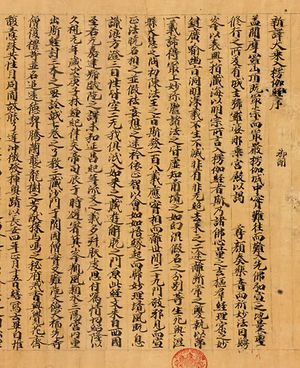 Copy of the Laṅkāvatāra Sūtra from Dunhuang

The Laṅkāvatāra Sūtra figured prominently in the development of East Asian Buddhism and Tibetan Buddhism. It is notably an important sūtra in the Chan/Zen tradtions.

The Lankavatara Sutra is the holy grail of Zen. Zen’s first patriarch, Bodhidharma, gave a copy of this text to his successor, Hui-k’o, and told him everything he needed to know was in this book. Passed down from teacher to student ever since, this is the only Zen sutra ever spoken by the Buddha. Although it covers all the major teachings of Mahayana Buddhism, it contains but two teachings: that everything we perceive as being real is nothing but the perceptions of our own mind and that the knowledge of this is something that must be realized and experienced for oneself and cannot be expressed in words. In the words of Chinese Zen masters, these two teachings became known as “have a cup of tea” and “taste the tea.”[2]

This sūtra recounts a teaching primarily between Gautama Buddha and a bodhisattva named Mahāmati, "Great Wisdom". The sūtra is set in Laṅkā, the island fortress capital of Rāvaṇa, the king of the rākṣasa demons.

The Laṅkāvatāra Sūtra draws upon the concepts and doctrines of Yogācāra and Buddha-nature.[3] In the sūtra, the Buddha asserts that all the objects of the world, and the names and forms of experience, are merely manifestations of the mind:

Because the world is seen as being "mind-only" or "consciousness-only", all phenomena are void, empty of self (atman) and illusory:

There are four things by the fulfilling of which an earnest disciple may gain self-realisation of Noble Wisdom and become a Bodhisattva-Mahasattva: First, he must have a clear understanding that all things are only manifestations of the mind itself; second, he must discard the notion of birth, abiding and disappearance; third, he must clearly understand the egolessness of both things and persons...

As to the first; he must recognise and be fully convinced that this triple world is nothing but a complex manifestation of one's mental activities; that it is devoid of selfness and its belongings; that there are no strivings, no comings, no goings. He must recognise and accept the fact that this triple world is manifested and imagined as real only under the influence of habit-energy that has been accumulated since the beginningless past by reason of memory, false-imagination, false-reasoning, and attachments to the multiplicities of objects and reactions in close relationship and in conformity to ideas of body-property-and-abode.
As to the second; he must recognise and be convinced that all things are to be regarded as forms seen in a vision and a dream, empty of substance, un-born and without self-nature; that all things exist only by reason of a complicated network of causation... As to the third; he must recognise and patiently accept the fact that his own mind and personality is also mind-constructed, that it is empty of substance, unborn and egoless.[5]

The Laṅkāvatāra Sūtra describes the various tiers of consciousness in the individual, culminating in the tathāgatagarbha "buddha-womb" (i.e., buddha-nature) or "storehouse consciousness" (Skt. Ālayavijñāna), which is the base of the individual's deepest awareness and his tie to the cosmic.

In the sutras the Bhagavan (aka Buddha) says that the tathagatha-garbha (womb of the Buddhas) is intrinsically pure, endowed with thirty-two attributes and present in the bodies of all beings, and that, like a precious jewel wrapped in soiled clothing, the ever-present unchanging tathagatha-garbha is likewise wrapped in the soiled clothing of the skandhas, dhatus and ayantas and stained with the stains of erroneous projections of greed, anger and delusion.[6]

However, the Buddha makes clear that the Buddha-nature is not a self (atman) and is empty of self-nature. He states that it is merely a useful means (upaya) of teaching the dharma to others:

The reason why the 'Tathagatas' who are Arhats and fully enlightened Ones teach the doctrine pointing to the tathagatagarbha which is a state of non-discrimination and image-less, is to make the ignorant cast aside their fear when they listen to teaching of egolessness. It is like a potter who manufactures various vessels out of a mass of clay of one sort by his own manual skill and labor ... that the 'Tathagatas' preach the egolessness of things which removes all the traces of discrimination by various skillful means issuing from their transcendental wisdom, that is, sometimes by the doctrine of the 'tathagatagarbha' , sometimes by that of egolessness ... Thus, 'Mahamati', the doctrine of the 'tathagatagarbha' is disclosed in order to awaken the philosophers from their clinging to the idea of the ego. Accordingly, 'Mahamati', the 'Tathagatas' disclose the doctrine of the 'tathagatagarbha' which is thus not to be known as identical with the philosopher's notion of an ego-substance. Therefore , 'Mahamati', in order to abandon the misconception cherished by the philosophers, you must depend on the 'anatman-tathagatagarbha'.[7]

The tathāgatagarbha or "Buddha-nature" doctrine has been interpreted as an expression of the doctrines of pratītyasamutpāda "dependent origination" and emptiness. While seemingly monistic in nature, describing the tathagatagarbha as eternal (nitya) and immutable (atman), this doctrine is ultimately based on emptiness. According to Japanese scholar Yamaguchi Susumu, the most important point in the tathagatagarbha literature is that "the pratitysamutpada is the tathagatagarbha."[8] Likewise, Ichijo Ogawa argues that tathāgatagarbha is basically equivalent to emptiness and the nature of the mind which allows it to understand emptiness. This interpretation is based on a passage from the Ratnagotravibhāga, which states that "all sentient beings are possessed of the tathāgatagarbha".[8]

Externals are neither existent nor nonexistent.
Mind cannot be truly apprehended either.
The characteristic of the unborn is
to be utterly other than all these views.[10]

According to Asanga Tillekharatna, "it is generally believed that the sutra was compiled during 350-400 CE," although "many who have studied the sutra are of opinion that the introductory chapter and the last two chapters were added to the book at a later period."[11] Four translations of the Laṅkāvatāra Sūtra were made from Sanskrit into the Chinese language between roughly 420 CE and 704, the earliest being attributed to Dharmarakṣa in the 5th Century.[12](p5) Of these, only three are now extant.

The first extant Chinese translation is Taishō Tripiṭaka 670 (楞伽阿跋多羅寶經). This is the earliest edition which was translated by Guṇabhadra in 443 CE, and divided into four fascicles.[13][14] This edition by Guṇabhadra is said to be the one handed down from the founder of Chan Buddhism, Bodhidharma, to the Second Patriarch, Dazu Huike, saying:

I have here the Laṅkāvatāra in four fascicles which I now pass to you. It contains the essential teaching concerning the mind-ground of the Tathagata, by means of which you lead all sentient beings to the truth of Buddhism.[12](p5)

The second extant Chinese translation is Taishō Tripiṭaka 671 (入楞伽經). This second edition was translated by Bodhiruci in 513 CE,[12](p6)[14] and divided into ten fascicles.[15] This edition is criticized in the imperial preface to the later translation, which says that it contains extra words and sentences mixed in that detract from the original meaning.[12](p9)

The third extant Chinese translation is Taishō Tripiṭaka 672 (大乘入楞伽經). This third edition was translated by Śikṣānanda in 700-704 CE, and divided into seven fascicles.[16][14] This final translation was made at the behest of Empress Wu Zetian, after Śikṣānanda had completed his 80-fascicle translation of the Avataṃsaka Sūtra.[12](p8) This translation is said to have employed five separate Sanskrit editions for accuracy.[12](p9) Before the final edits to this version had been made, Śikṣānanda returned to India, and another Indian monk came to China who had studied the Buddhist sutras for 25 years in India, and who knew the Laṅkāvatāra Sūtra. He was then given the task of revising the translation made by Śikṣānanda.[12](p9)

In addition to these Chinese translations, an extant Sanskrit edition of the Laṅkāvatāra Sūtra is available as well as two Tibetan editions.[17][12](p12) One Tibetan translation is derived from the Sanskrit original, and the other is likely a translation of Guṇabhadra's Chinese into Tibetan.[12](p13-15) The Sanskrit version was preserved as a manuscript in Nepal and used as a basis for Nanjo Bunyu's critical edition in 1923. [18]

The earliest translations of the Laṅkāvatāra Sūtra are significantly shorter than later ones, which D.T. Suzuki interprets as suggesting that additions were made to the text over time.[12](p16) The first and last chapters (which connect the text with Ravana, the villain of the Ramayana, and adds a dharani) are missing from the earliest translation, and the prose of the first chapter in later translations does not agree with the verse-form provided alongside it.[12](p20) Suzuki also suggests that the chapter on meat eating, where the Theravada 'thrice clean' practice is criticized, may be a later edition based on its different tone and content from the rest of the text.[12](p20) Based on the text's lack of organization, varying and sometimes irrelevant chapter headings, and expansion over time, Suzuki suggests that it may have originated as a collection of individual passages summarizing essential Mahayana doctrines, which were later shaped into a narrative.[12](p19-20)

The Lankavatara Sutra is quoted by Gampopa in his classic text Jewel Ornament of Liberation. See section #Quotes in this article.

The following tranlsation is in progress: