The Madhyamakālaṃkāra is an eighth-century Buddhist text, believed to have been originally composed in Sanskrit by Śāntarakṣita (725–788),[1] which is extant in Tibetan. The Tibetan text was translated from the Sanskrit by Surendrabodhi (Wylie: lha dbang byang chub) and Jñānasūtra.

In the short-verse text of the Madhyamakālaṃkāra, Śāntarakṣita details his philosophical synthesis of the conventional truth of Yogacara with the ultimate truth of the Madhyamaka, assisted by Buddhist logic with a lengthy discussion of the "neither one nor many" argument.

Lipman (1979) published a study of the Madhyamakālaṃkāra in English.[2] The text and Ju Mipham's commentary are available in studies by Doctor (2004) and the Padmakara Translation Group (2005). Blumenthal (2004) also provides a version of the Madhyamālaṃkāra with commentary by Gyaltsab Je (1364–1432).[3]

According to Doctor (2004: p.ix), the Madhyamakālaṃkāra

... is renowned as the principal scripture of the Yogācāramadhyamaka. Although masters such as Ārya Vimuktisena (6th century CE) are said to have set forth their presentations of the Madhyamaka in a way that employs the assertions specific to the Vijñānavāda, Śāntarakṣita was the one to found an actual system in which the ultimate freedom from constructs (Sanskrit niṣprapañca, Tibetan spros bral)[4] is realized through insight into the non-existence of any external matter (bāhyārtha, phyi don).[5] This synthesis of Yogācāra and Madhyamaka, the two great currents of Mahāyāna philosophy, the principles of the vast and the profound as originally set forth by Asaṇga (fl. 4th century) and Nāgārjuna (possibly 150-250 CE) respectively, is also characterized by its use of the pramāṇa methods of Dignāga (5th-6th century) and Dharmakīrti (6th-7th century) as integral steps towards the realization of the ultimate.[6]

Berzin (2006) translates the title into English as A Filigree of the Middle Way (dBu-ma rgyan, Skt. Madhyamaka-alamkara).[7]

In general, it is important to be familiar with the teachings on probative signs and reasoning and, within that context, the notions of other-elimination, the three conditions of the correct sign, and all the methods of proof or refutation.

According to the doctrine of apoha (gshan-sel-wa in Tibetan), an entity is defined as the negation of its opposite; a cow is not a non-cow.

When a linga is identified, there are three possibilities; the sign may be present in all, some or none of the sapakṣas or vipakṣas. Identifying a sign assumes that it is present in the pakṣa, and the first condition is met. Dignaga combined these in his Hetucakra.[10]

The title of Ju Mipham's Commentary (Wylie: dbu ma rgyan gyi rnam bshad 'jam dbyangs bla ma dgyes pa'i zhal lung) conveys Mipham's precepts in honouring the dictate of his guru (rtsa ba'i bla ma), Jamyang Khyentse Wangpo (1820–1892), who charged him with the commentary. Manjushri is used as a term of respect for the scholarship and understanding beyond letters and words of his Rimé teacher. Suchness is the revelation of Mipham's vajrayana from the Padmakara Translation Group's colophon (2005: p. 382):

Seeing that there are many reasons for expounding the Madhyamakalankara, Jamyang Khyentse Wangpo, our incomparable guide, unbounded in his kindness, whose very name I hardly dare to pronounce, who is the very personification of the compassion of the abbot Bodhisattva, of the master Padmasambhava, and of King Trisongdetsen, who is the sovereign among the learned and accomplished, who is supreme Manjushri appearing in the form of a monk in saffron robes, and whose renown fills the world, gave to me the Indian and Tibetan commentaries on the Madhyamakalankara, asking me to study them well and to compose a commentary. And as his diamondlike injunction came down upon my head, I earnestly gave myself to the task.[12]

Then, for the ultimate truth, there are two schools of Madhyamaka: those who assert the ultimate is the illusory nature, and those who make no assertions. To explain further, the first says that the illusory nature is established when the perceiver of an object experiences a perception of that object as being unreal. This view was put forth by Kamalashila, Shantarakshita, and other proponents of the Svatantrika Madhyamaka school. Their view is clearly explained in Mipham Jamyang Gyatso's commentary on Shantarakshita's 'Ornament of the Middle Way.' This commentary by Mipham Rinpoche is often considered the most important philosophical text of the Nyingma lineage in Tibet, particularly for those who follow Mipham Rinpoche's understanding of the Shentong Madhyamaka view.[13]

Neither one nor many

In the ninth shloka of the Madhyamālaṃkāra, Śāntarakṣita refutes personal singularity; "person" is conveyed a continuum understood as "neither one nor many". The Padmakara Translation Group qualifies the word "person" (Wylie: gang zag), extending it to all sentient beings.[15] The shloka is translated by the group[15] and Doctor.[16] Ju Mipham's commentary on the verse is likewise translated by both sources.[lower-alpha 1][lower-alpha 2]

Ju Mipham made five assertions not unique to Śāntarakṣita's view:[17]

In the first assertion, Śāntarakṣita makes the Sautrantika distinction that objects of cognition are of two kinds: abstract, theoretical mental objects (including generalities, like classes of objects and their names) and actual things, defined as things which function. Although the Sautantrika made that distinction for conventional and ultimate truth, Śāntarakṣita discards theoretical or general objects and discusses actual things as conventional truth. He incorporates Dharmakirti's cognition which analyzes conventionalities, connecting that with cognition which analyzes for ultimacy.[18]

In the second assertion, a self-reflective awareness (svasaṃvedana) exists; consciousness can be aware of objects of cognition. This position was later critiqued by Je Tsongkhapa as implying that a self-reflective awareness is separate from objects of cognition. Ju Mipham later qualified its meaning; cognition is self-aware, not a separate material thing.[19] 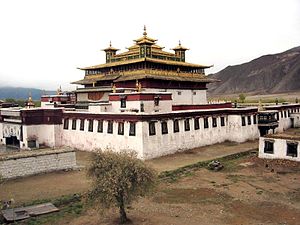 In the third assertion, the consciousness-only view of conventional appearances is the best way to progress. Still affirming the supremacy of the Madhyamaka school when students analyze for ultimacy, when relating to conventionalities the mind-only position is recommended.[20]

The fourth assertion distinguishes between the ultimate way of abiding established by the Madhyamaka method (the non-enumerated ultimate) and an approximate (enumerated) ultimate: a lesser, conventional understanding of the ultimate which leads to the non-enumerated ultimate.[21] As part of his explanation of why this is useful, Mipham quotes Gorampa (who references the four conceptual extremes) (Wylie: mtha' bzhi; Sanskrit: caturanta):

The intellect of ordinary people, which investigates ultimate reality, cannot refute in a single stroke all four conceptual extremes. But by refuting these four extremes one after the other and by meditating properly, one reaches the path of seeing. This is called the view that sees the dharmadatu.

In the fifth assertion, analysis of objects with respect to approximate (enumerated) ultimates does not create a problem of true establishment. A distinction can be made when analyzing for each case, including the two approaches to cognition (one for the conventional domain and the other to analyze for ultimacy) which are his additions to the Pramana tradition of valid cognition. Mipham uses this demonstration in his commentary to point out a problem with Je Tsongkhapa's approach of negating the predicate of "true establishment" instead of the object of perception, which is avoided in Śāntarakṣita's approach. Mipham also notes that many Prasaṅgika writers (similar to their Svatantrika counterparts) made positive assertions to move students closer to the ultimate view, pointing out that the distinction between Prasangika and Svatantrika lies in how students are taught about conventionalities and not in the consideration of ultimate truth. He concludes that Je Tsongkhapa, in making a distinction based on true establishment, proposes a Svatantrika rather than a Prasangika approach.[22]