This concept originated in India but was a major influence in the development of East Asian Buddhism, where it was equated with the concept of Buddhadhātu, "buddha-element" or "buddha-nature".

The Tathāgatagarbha sūtras include the Tathāgatagarbha Sūtra, Śrīmālādevī Siṃhanāda Sūtra, Mahāyāna Mahāparinirvāṇa Sūtra and the Aṅgulimālīya Sūtra. Related ideas are in found in the Laṅkāvatāra Sūtra and Avataṃsaka Sūtra. Another major text, the Awakening of Faith, was originally composed in China,[1] while the Mahāyāna Mahāparinirvāṇa Sūtra was considerably extended in China.

Development of the concept

Luminous mind in the Nikāyas

In the Anguttara Nikāya, the Buddha refers to a "luminous mind".[4][lower-alpha 1]

The canon does not support the identification of the "luminous mind" with nirvanic consciousness, though it plays a role in the realization of nirvana.[5][6] Upon the destruction of the fetters, according to one scholar, "the shining nibbanic consciousness flashes out of the womb of arahantship, being without object or support, so transcending all limitations."[7]

Though the tathagatagarbha and the Buddha-nature have not exactly the same meaning, in the Buddhist tradition they became equated. In the Angulimaliya Sūtra and in the Mahāyāna Mahāparinirvāṇa Sūtra the terms "Buddha-nature" (Buddha-dhātu) and "tathāgatagarbha" are synonyms.

All are agreed that the tathāgatagarbha is an immortal, inherent transcendental essence or potency and that it resides in a concealed state (concealed by mental and behavioural negativities) in every single being, even the worst - the icchantika.[citation needed]

Although attempts are made in the Buddhist sutras to explain the tathāgatagarbha, it remains ultimately mysterious and allegedly unfathomable to the ordinary, unawakened person, being only fully knowable by perfect Buddhas themselves.

The tathāgatagarbha itself needs no cultivation, only uncovering or discovery, as it is already present and perfect within each being:

An unknown treasure exists under the home of a poor person that must be uncovered through removing obstructive dirt, yielding the treasure that always was there. Just as the treasure already exists and thus requires no further fashioning, so the matrix-of-one-gone-thus [i.e. the tathāgatagarbha], endowed with ultimate buddha qualities, already dwells within each sentient being and needs only to be freed from defilements.[8]

Charles Muller comments that the tathagatagarbha is the mind's original pure nature and has neither a point of origination nor a point of cessation: 'tathagatagarbha expresses the already perfect aspect of the original nature of the mind that is clear and pure without arising or cessation.'[9]

The tathāgatagarbha is the ultimate, pure, ungraspable, inconceivable, irreducible, unassailable, boundless, true and deathless quintessence of the Buddha's emancipatory reality, the very core of his sublime nature.

Key texts associated with this doctrine, written in India, are the

Comparing the tradition of Tathāgatagarbha sūtras to the Yogachara and Madhyamaka schools, Paul Williams writes that this collection appears to have been less prominent in India, but became increasingly popular and significant in Central Asian Buddhism and East Asian Buddhism.[12]

The Tathāgatagarbha Sūtra presents the tathāgatagarbha as a virtual Buddha-homunculus, a fully wisdom-endowed Buddha, "a most victorious body ... great and indestructible", inviolate, seated majestically in the lotus position within the body of each being, clearly visible only to a perfect Buddha with his supernatural vision.[13][need quotation to verify] This is the most "personalist" depiction of the tathāgatagarbha encountered in any of the chief Tathāgatagarbha sutras and is imagistically reminiscent of Mahāyāna descriptions of the Buddha himself sitting in the lotus posture within his own mother's womb prior to birth: "luminous, glorious, gracious, beautiful to see, seated with his legs crossed" and shining "like pure gold ..."[14]

Some of the earliest and most important Tathāgatagarbha sūtras have been associated by scholars with certain early Buddhist schools in India.

Brian Edward Brown dates the composition of the Śrīmālādevī Siṃhanāda Sūtra to the Andhra Ikshvaku in the 3rd century CE, as a product of the Mahāsāṃghikas of the Āndhra region.[15][not in citation given] Wayman has outlined eleven points of complete agreement between the Mahāsāṃghikas and the Śrīmālā, along with four major arguments for this association.[16]

Sree Padma and Anthony Barber also associate the earlier development of the Tathāgatagarbha Sūtra with the Mahāsāṃghikas, and conclude that the Mahāsāṃghikas of the Āndhra region were responsible for the inception of the Tathāgatagarbha doctrine.[17] According toŚrīmālādevī Siṃhanāda Sūtra, the tathāgatagarbha is "not born, does not die, does not transfer, does not arise. It is beyond the sphere of the characteristics of the compounded; it is permanent, stable and changeless."[18][19][not in citation given][20]:40[full citation needed] Moreover, it has been described as "the sphere of experience of the Tathāgatas [Buddhas]."[20][page needed]

The development of the Buddha-nature doctrine is closely related to that of Buddha-matrix (Sanskrit: tathāgatagarbha). In the Anunatva-Apurnatva-Nirdeśa, the Buddha links the tathāgatagarbha to the Dharmadhātu (ultimate, all-equal, uncreated essence of all phenomena) and to essential being, stating: "What I call "be-ing" (sattva) is just a different name for this permanent, stable, pure and unchanging refuge that is free from arising and cessation, the inconceivable pure Dharmadhatu."[21]

Every being has Buddha-nature (Buddha-dhatu). It is indicated in the Aṅgulimālīya Sūtra that if the Buddhas themselves were to try to find any sentient being who lacked the Buddha-nature, they would fail. In fact, it is stated in this sutra that the Buddhas do discern the presence of the everlasting Buddha-nature in every being:

Even though all Buddhas themselves were to search assiduously, they would not find a tathāgata-garbha (Buddha-nature) that is not eternal, for the eternal dhātu, the buddha-dhātu (Buddha Principle, Buddha Nature), the dhātu adorned with infinite major and minor attributes, is present in all beings.[22]

The Ratnagotravibhāga sees the Buddha-nature (tathāgatagarbha) as "suchness" or "thusness" - the abiding reality of all things - in a state of tarnished concealment within the being. The idea is that the ultimate consciousness of each being is spotless and pure, but surrounded by negative tendencies which are impure. Paul Williams comments on how the impurity is actually not truly part of the Buddha-nature, but merely conceals the immanent true qualities of Buddha mind (i.e. the buddha-nature) from manifesting openly:

The impurities that taint the mind and entail the state of unenlightenment (samsara) are completely adventitious ... On the other hand from the point of view of the mind's pure radiant intrinsic nature, because it is like this it is possessed of all the many qualities of a Buddha's mind. These do not need actually to be brought about but merely need to be allowed to shine forth. Because they are intrinsic to the very nature of consciousness itself they, and the very state of Buddhahood, will never cease.[25] 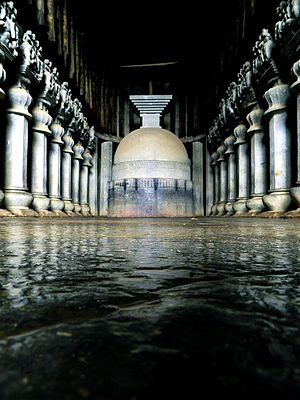 The Nirvana Sutra is an eschatological text.[26] Its core was written in India in a time which was perceived as the age in which the Buddha-dharma would perish, and all the Mahayana sutras disappear. The sutra responds to this awaited end with the proclamation of the tathagatagarbha, the innate Buddhahood present in all man.[26]

According to Sallie B. King, the Mahaparinirvana Sutra does not represent a major innovation, and is rather unsystematic,[27] which made it "a fruitful one for later students and commentators, who were obliged to create their own order and bring it to the text".[27] According to King, its most important innovation is the linking of the term buddhadhātu with tathāgatagarbha.[27]

Buddhadhātu, "Buddha-nature", "the nature of the Buddha", that what constitutes a Buddha, is a central topic of the Nirvana sutra.[28] According to Sally King, the sutra speaks about Buddha-nature in so many different ways, that Chinese scholars created a list of types of Buddha-nature that could be found in the text.[27] The "nature of the Buddha" is presented as a timeless, eternal "Self", which is akin to the tathāgatagarbha, the innate possibility in every sentient being to attain Buddhahood and manifest this timeless Buddha-nature.[28] This "hidden treasury" is present in all sentient beings:

[the Buddha] expounds the doctrine that this quality [of the hidden interior, wondrous treasury] is not only common to buddhas but to all living beings as well.[29]

This does not mean that sentient beings are at present endowed with the qualities of a Buddha, but that they will have those qualities in the future.[28] It is obscured from worldly vision by the screening effect of kleshas, tenacious negative mental afflictions. The most notable of which are greed, hatred, delusion, and pride. Once these negative mental states have been eliminated, however, the buddhadhātu is said to shine forth unimpededly and the buddhadhātu can then be consciously "entered into", and therewith deathless Nirvana attained:[30]

[T]he tathagatagarbha is none but Thusness or the Buddha Nature, and is the originally untainted pure mind which lies overspread by, and exists in, the mind of greed and anger of all beings. This bespeaks a Buddha Body that exists in a state of bondage.[31]

The later Laṅkāvatāra Sūtra presents the tathāgatagarbha as being a teaching completely consistent with and identical to emptiness. It synthesizes tathāgatagarbha with the emptiness (śūnyatā) of the prajñāpāramitā sutras. Emptiness is the thought-transcending realm of non-duality and unconditionedness: complete freedom from all constriction and limitation.

The Laṅkāvatāra Sūtra describes the tathāgatagarbha as "by nature brightly shining and pure," and "originally pure," though "enveloped in the garments of the skandhas, dhātus and ayatanas and soiled with the dirt of attachment, hatred, delusion and false imagining." It is said to be "naturally pure," but it appears impure as it is stained by adventitious defilements.[32] Thus the Laṅkāvatāra Sūtra identifies the luminous mind of the canon with the tathāgatagarbha.[33]

It also equates the tathāgatagarbha (and ālaya-vijñāna) with nirvana, though this is concerned with the actual attainment of nirvana as opposed to nirvana as a timeless phenomenon.[34][35]

In the later[36] Laṅkāvatāra Sūtra it is said that the tathāgatagarbha might be mistaken for a self, which it is not.[37] In fact, the sutra states that it is identical to the teaching of no-self.[38]

In Section XXVIII of the Laṅkāvatāra Sūtra, Mahāmati asks Buddha, "Is not this Tathagata-garbha taught by the Blessed One the same as the ego-substance taught by the philosophers?" The Buddha's response:

Yet in the concluding Sagathakam portion of the text, coming after the above-quoted passage, the sutra does not deny the reality of the Self; in fact it castigates such denial of the 'pure Self'. According to Thomas Cleary, "The original scripture rigorously rejects nihilism and does not ultimately deny either self or world",[40] and quotes the sutra: "Confused thinkers without guidance are in a cave of consciousness running hither and thither seeking to explain the self. The pure self has to be realized first hand; that is the matrix of realization [Tathagatagarbha], inaccessible to speculative thinkers."[40]

The tathāgatagarbha doctrine became linked (in syncretic form) with doctrines of Citta-mātra ("just-the-mind") or Yogācāra. Yogācārins aimed to account for the possibility of the attainment of Buddhahood by ignorant sentient beings: the tathāgatagarbha is the indwelling awakening of bodhi in the very heart of samsara. There is also a tendency in the tathāgatagarbha sutras to support vegetarianism, as all persons and creatures are compassionately viewed as possessing one and the same essential nature - the Buddha-dhatu or Buddha-nature.