From Encyclopedia of Buddhism
(Redirected from Avijja)
Jump to: navigation, search 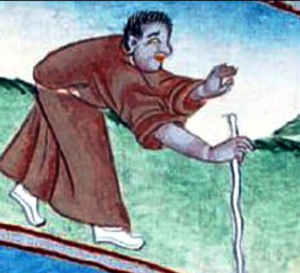 In the Wheel of Life, avidyā is represented by an old blind person.

Avidyā (P. avijjā; T. ma rig pa; C. wuming; J. mumyō K. mumyōng 無明) is commonly translated as "ignorance" or "delusion". It can be defined as not understanding the full meaning and implication of the four noble truths or as a fundamental misunderstanding of the nature of reality.

Avidyā is identified within the Buddhist teachings in the following contexts:

Within the context of the twelve links of dependent origination, avidyā is typically symbolized by a blind person walking with a cane.

From the Buddhist point of view, the unwillingness or failure to see the facts of life as they are, to see ourselves as we are, and to conduct ourselves in harmony with these realities, is the chief cause of our self-inflicted suffering and, therefore the chief obstacle to our happiness. This state of denial, or lack of realization of the facts of existence, is called avidya in Sanskrit--literally, "the failure to see or know"--translated as "ignorance". One of the great contributions of Gautama Buddha was the realization that ignorance is the primary cause of the sufferings we impose on ourselves and others.[8]

Ringu Tulku explains the nature of avidya (ignorance) as follows:

In the Buddhist sense, ignorance is equivalent to the identification of a self as being separate from everything else. It consists of the belief that there is an "I" that is not part of anything else. On this basis we think, "I am one and unique. Everything else is not me. It is something different."... From this identification stems the dualistic view, since once there is an "I," there are also "others." Up to here is "me." The rest is "they." As soon as this split is made, it creates two opposite ways of reaction: "This is nice, I want it!" and "This is not nice, I do not want it!" ...[1]

Bhikkhu Bodhi explains the relationship between the terms avijja and moha within the Pali tradition:

Ignorance (avijja) is the cetasika delusion (moha), which obscures perception of the true nature of things just as a cataract obscures perception of visible objects. According to the Suttanta method of explanation, ignorance is non-knowledge of the Four Noble Truths. According to the Abhidharma method, ignorance is non-knowledge of eight things: the Four Noble Truths, the pre-natal past, the post-mortem future, the past and the future together, and dependent arising.[10]

Moha is ignorant of the true nature of realities, it does not know nāma and rūpa as they are. Moha is lack of knowledge about the four noble Truths: about dukkha, the origination of dukkha, the ceasing of dukkha and the way leading to the ceasing of dukkha. So long as ignorance has not been eradicated we have to continue to be in the cycle of birth and death, we have to be born again and again. The Pāli term avijjā is used for ignorance in connection with the “Dependent Origination”, the conditional arising of phenomena in the cycle of birth and death. Avijjā is the first link in the chain of conditions for the continuation of this cycle. At the attainment of arahatship ignorance is eradicated and then there are no more conditions for rebirth.[11]

In the Sanskrit tradition, avidyā is identified as:

What avidya? It is a lack of being aware to one's fullest capacity and it covers the three realms of life. Its function is to serve as it basis for mistaken stubbornness, doubt and emotionality about the entities of reality.[14]

There are two levels of ignorance: ignorance of the absolute, or the essential nature of phenomena, and the ignorance that prevents us from taking an accurate reading of the relative world. These two kinds of ignorance are like two kinds of thread: When they are tightly woven together, they are not easy to identify, yet they make up the fabric of delusion.

As a result of the first type of ignorance, we lack wisdom. Lacking an understanding of our true nature, we perceive that which is illusory and spacious to be solid and real. The second type of ignorance is the inability to clearly understand the laws of karma and interdependence, which then results in an inaccurate relationship to the world.[15]

There are two types of ignorance: a basic form and a secondary form that is involved only in nonvirtuous, or negative, actions. The first is a consciousness that misconceives the status of persons and other phenomena. It imagines that persons and other phenomena have a concreteness beyond that which they actually have, thereby inducing all afflictive emotions (kleshas). [...] The other form of ignorance--the type that is involved only in nonvirtuous, or negative actions--is a misconception about the effects of actions. In this case, there is also obscuration with respect to even the course relationship of actions and their effects--no understanding that if a certain action is performed, a certain result will follow, and developing misconceptions such as that only please will arise from a theft.[16]

Within the twelve links

Avidyā
is one of the

Avidya is identified as the first of the twelve links of dependent origination (twelve nidanas)—a sequence of links that describe a karmic process that keeps being bound within samsara (cyclic existence).

The sequence of dependent origination begins with the condition of unknowing or ignorance (avijjā), which in Buddhist iconography is depicted as either a blind man or someone wearing a blindfold. This is the driver of the bus to dukkha [i.e. suffering]. If you have to choose the one determining factor for suffering, it’s this ignorance. People tend to take “ignorance” as pejorative, but it more precisely refers to a lack of gnosis or insightful seeing. It is summarized as “not understanding the four noble truths”—or, perhaps more accurately, not understanding their implications. That is, as long as there is the condition of ignorance, the mind still expects to find an experience that is completely satisfying and feels disappointed when things “go wrong.” There is a parable of a man eating a bag of chili peppers one by one, weeping at their fiery taste as he does so. When asked why he continues to eat the peppers, he replies, “I’m looking for the sweet one.” This is ignorance.[6]

The twelve nidanas begins with what's called ignorance. It is ignorant in the sense that our own struggle has not been seen. We are unable to see our own struggle properly and completely, therefore there is this notion of blindness. The imagery for this is what's called the blind mother principle. A blind grandmother has no chance to see her grandchildren. She has her own concepts and ideas about how the world should function in her particular period of time in history and her particular social setup. All of that is on one level, that of blindness. And within the blindness, the grandmother struggles enormously, trying to communicate with her grandchildren constantly. The blind grandmother is also highly inquisitive and extremely interested in any kind of gossip that involves the grandchildren. Her way of maintaining power over her grandchildren is to maintain her intelligence of the gossip, which is what is called subconscious gossip: who got married, who had children, who got divorced, who got killed, who had cancer, who had an accident--that and this, this and that, this, this, that... That kind of gossip is endless...it goes on like a wheel which revolves again and again and again, maintaining constant eternity. Therefore, the second nidana process, which is called samskara...is traditionally analogized by a potter's wheel...This represents conceptual mind forming itself in a certain situation, and this is the point at which the creation of karma begins.[17]

The antidote to avidyā is the development of "wisdom" (Skt.: prajñā; Pali: pañña). There are many different practices within the Buddhist tradition that are said to be an antidote to avidya, including contemplation on the Four Noble Truths.

The term vidya means "to see" or "to know". The term a is a negation. Therefore, avidya means to "not see" or "not know".

The word is derived from the Proto-Indo-European root *weid-, meaning "to see" or "to know". It is a cognate with the Latin verb vidēre' (to see)' and English "wit".

Roshi Enkyo O’Hara states that the Chinese and Japanese symbols for this term show the character “mu”, a barrier, next to the characters for the sun and moon: meaning no sun and moon, no light, no clarity, no knowing–a completely deluded state.[18]