Deprecated: The each() function is deprecated. This message will be suppressed on further calls in /home/customer/www/encyclopediaofbuddhism.org/public_html/includes/MagicWordArray.php on line 206
 East Asian Yogacara - Encyclopedia of Buddhism

From Encyclopedia of Buddhism
(Redirected from East Asian Yogācāra)
Jump to: navigation, search

Xuanzang was a key figure in East Asian Yogacara 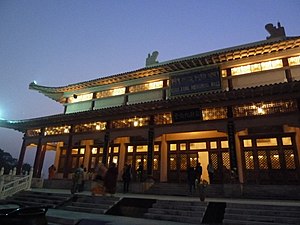 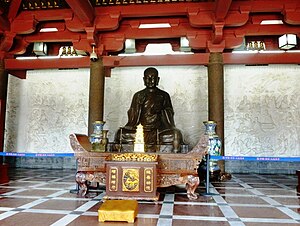 Translations of Indian Yogācāra texts were first introduced to China in the early fifth century.[2] Among these was Guṇabhadra's translation of the Laṅkāvatāra Sūtra in four fascicles, which would also become important in the early history of Chan Buddhism.

During the sixth century CE, the Indian monk and translator Paramārtha widely propagated Yogācāra teachings in China. His translations include the Saṃdhinirmocana Sūtra, the Madhyāntavibhāga-kārikā, the Triṃśikā-vijñaptimātratā, and the Mahāyānasaṃgraha. Paramārtha also taught widely on the principles of Consciousness Only, and developed a large following in southern China. Many monks and laypeople traveled long distances to hear his teachings, especially those on the Mahāyānasaṃgraha.[3]

Although Yogācāra teachings had been propagated widely, most look to Xuanzang as the most important founder of East Asian Yogācāra. At the age of 33, Xuanzang made a dangerous journey to India in order to study Buddhism there and to procure Buddhist texts for translation into Chinese.[4] This journey was later the subject of legend and eventually fictionalized as the classic Chinese novel Journey to the West, a major component of East Asian popular culture from Chinese opera to Japanese television (Monkey Magic). Xuanzang spent over ten years in India traveling and studying under various Buddhist masters.[4] These masters included Śīlabhadra, the abbot of the Nālandā Mahāvihāra, who was then 106 years old.[5] Xuanzang was tutored in the Yogācāra teachings by Śīlabhadra for several years at Nālandā. Upon his return from India, Xuanzang brought with him a wagon-load of Buddhist texts, including important Yogācāra works such as the Yogācārabhūmi-śastra.[6] In total, Xuanzang had procured 657 Buddhist texts from India.[4] Upon his return to China, he was given government support and many assistants for the purpose of translating these texts into Chinese.

As an important contribution to East Asian Yogācāra, Xuanzang composed the treatise Cheng Weishi Lun, or "Discourse on the Establishment of Consciousness Only."[7] This work is framed around Vasubandhu's Triṃśikā-vijñaptimātratā, or "Thirty Verses on Consciousness Only." Xuanzang upheld Dharmapala of Nalanda's commentary on this work as being the correct one, and provided his own explanations of these as well as other views in the Cheng Weishi Lun.[7] This work was composed at the behest of Xuanzang's disciple Kuiji, and became a central representation of East Asian Yogācāra.[7] Xuanzang also promoted devotional meditative practices toward Maitreya Bodhisattva. Xuanzang's disciple Kuiji wrote a number of important commentaries on the Yogācāra texts and further developed the influence of this doctrine in China, and was recognized by later adherents as the first true patriarch of the school.[8]

In time, Chinese Yogācāra was weakened due to competition with other Chinese Buddhist traditions such as Tiantai, Huayan, Chan and Pure Land Buddhism. Nevertheless, it continued to exert an influence, and Chinese Buddhists relied on its translations, commentaries, and concepts heavily, absorbing Yogācāra teachings into the other traditions.[6]

In a moment I saw that tall, dignified monks were standing in line before the throne. Suddenly, a bhikṣu, holding a sutra in his hands, came down from behind the throne and handed the sutra to me, saying, "Master is going to talk about this sutra. He asked me to give it to you." I received it with joy but when I opened it I saw that it was written in gold Sanskrit letters which I could not read. I put it inside my robe and asked, "Who is the Master?" The bhiksu replied, "Maitreya."[9]

Maitreya said, "Discrimination is consciousness. Nondiscrimination is wisdom. Clinging to consciousness will bring disgrace but clinging to wisdom will bring purity. Disgrace leads to birth and death but purity leads to Nirvana." I listened to him as if I were in a dream within the dream. His voice, like the sound of tinkling crystal, floated on the air. I could hear him so clearly that even when I awoke his words kept on repeating in my mind. Now I realized the difference between consciousness and wisdom. Now I realized also that the place where I had been in my dream was Maitreya Buddha's Chamber in Tushita Heaven.[9]

In the early part of the 20th century, the laymen Yang Wenhui and Ouyang Jian (歐陽漸) (1871–1943) promoted Buddhist learning in China, and the general trend was for an increase in studies of Buddhist traditions such as Yogācāra, Sanlun, and Huayan.[10][11] In his 1929 book on the history of Chinese Buddhism, Jiang Weiqiao wrote:

In modern times, there are few śramaṇa who research [Faxiang]. Various laypeople, however, take this field of study to be rigorous, systematic and clear, and close to science. For this reason, there are now many people researching it. Preeminent among those writing on the topic are those at Nanjing's Inner Studies Academy, headed by Ouyang Jian.[12]

Ouyang Jian founded the Chinese Institute of Inner Studies (Chinese: 支那內學院), which provided education in Yogācāra teachings and the Mahāyāna prajñā class of sūtras, given to both monastics and laypeople.[13] Many modern Chinese Buddhist scholars are second-generation descendants of this school or have been influenced by it indirectly.[13]

The Consciousness-Only teachings were transmitted to Japan as Hossō, and they made considerable impact. One of the founders of the Hossō sect in Japan was Kuiji.[14] Although a relatively small Hossō sect exists in Japan to this day, the sect has survived long after it died out in Korea and China, though its influence has diminished as the center of Buddhist authority moved away from Nara, and with the rise of the Ekayāna schools of Buddhism.[6] During its height, scholars of the Hossō school frequently debated with other emerging schools. Both the founder of Shingon Buddhism, Kūkai, and the founder of Tendai, Saichō, exchanged letters of debate with Hossō scholar Tokuitsu, which became particularly heated in the case of Saichō.[15] Nevertheless, the Hossō maintained amicable relations with the Shingon esoteric sect, and adopted its practices while providing further scholarship on Yogacara philosophy.

Hōnen, founder of the Jōdo-shū Pure Land sect, likewise sought advice from Hossō scholars of his time as a novice monk, and later debated with them after establishing his sect.[16] Another Hossō scholar, Jōkei was among Hōnen's toughest critics, and frequently sought to refute his teachings, while simultaneously striving, as Hōnen did, to make Buddhism accessible to a wider audience by reviving devotion to the bodhisattva Maitreya and teaching followers the benefits of rebirth in the Tuṣita rather than the pure land of Amitābha.[17] Jōkei is also a leading figure in the efforts to revive monastic discipline at places like Tōshōdai-ji, Kōfuku-ji and counted other notable monks among his disciples, including Eison, who founded the Shingon Risshu sect.[18]

In Korea, Beopsang teachings did not endure long as a distinct school, but as with China, its teachings were frequently included in later schools of thought.[6]