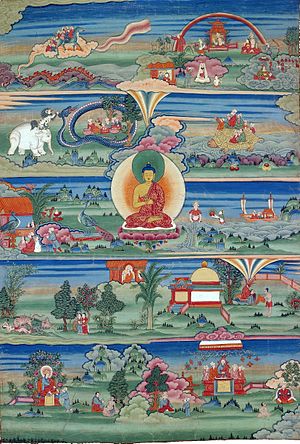 The Jātaka tales are stories of the past lives of Gautama Buddha. In a typical story, the Buddha will recount one of his past lives as a human or animal, demonstating a particular virtue in the process.

Within the Buddhist Canons

Each of the three major Buddhist Canons contain their own versions of the Jataka tales. See:

The Buddhist traditions identify nine or twelve categories of literature. The Jataka tales belong to:

According to A. K. Warder, the Jātakas were originally amongst the earliest Buddhist literature, with metrical analysis methods dating their average contents to around the 4th century BCE.[1] According to Warder, the Jātakas are the precursors to the various legendary biographies of the Buddha, which were composed at later dates.[2] Although many Jātakas were written from an early period, which describe previous lives of the Buddha, very little biographical material about Gautama's own life has been recorded.[2]

The Mahāsāṃghika Caitika sects from the Āndhra region took the Jātakas as canonical literature and are known to have rejected some of the Theravāda Jātakas which dated past the time of King Ashoka.[3] The Caitikas claimed that their own Jātakas represented the original collection before the Buddhist tradition split into various lineages.[1]

The Mankiala stupa in northern Pakistan marks the spot where, according to the Jataka, an incarnation of Buddha sacrificed himself to feed tigers.[4]

Many stupas in northern India are said to mark locations from the Jātaka tales; the Chinese pilgrim Xuanzang reported several of these. A stupa in Pushkalavati, in northwestern Pakistan, marks where Syama fulfilled his filial duty to his blind parents. The Mankiala stupa near Gujar Khan commemorates the spot where Prince Sattva sacrificed himself to feed baby tigers.[4] Nearby the ascetic Ekasrnga was seduced by a beautiful woman. In Mangalura, Ksantivadin submitted to mutilation by a king. At Hadda Mountain a young Brahmin sacrificed himself to learn a half verse of the dharma. At Sarvadattaan an incarnation sold himself for ransom to make offerings to a Brahmin.[5]

Faxian describes the four great stupas as being adorned with precious substances. At one site king Sibi sacrifices his flesh to ransom a dove from a hawk. Another incarnation gave up his eyes when asked; a third incarnation sacrificed his body to feed a hungry tigress. As King Candraprabha he cut off his head as a gift to a Brahmin.[6] Some would sever their body parts in front of stupas that contained relics; or even end their own lives.